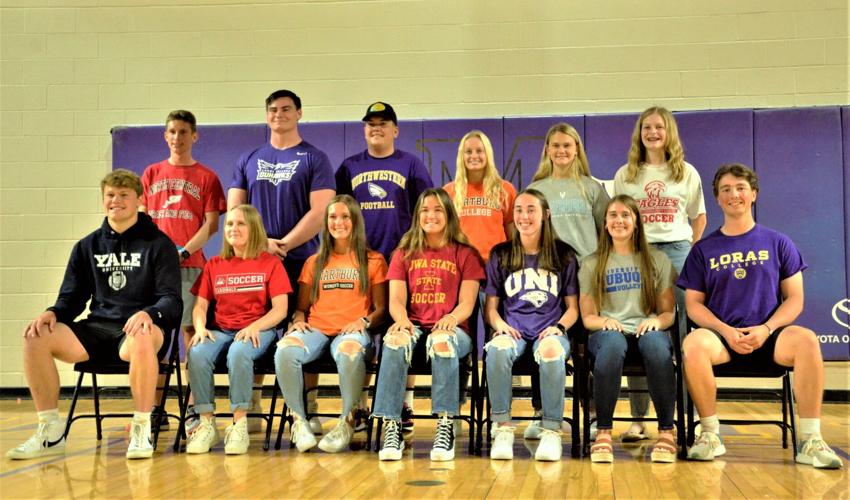 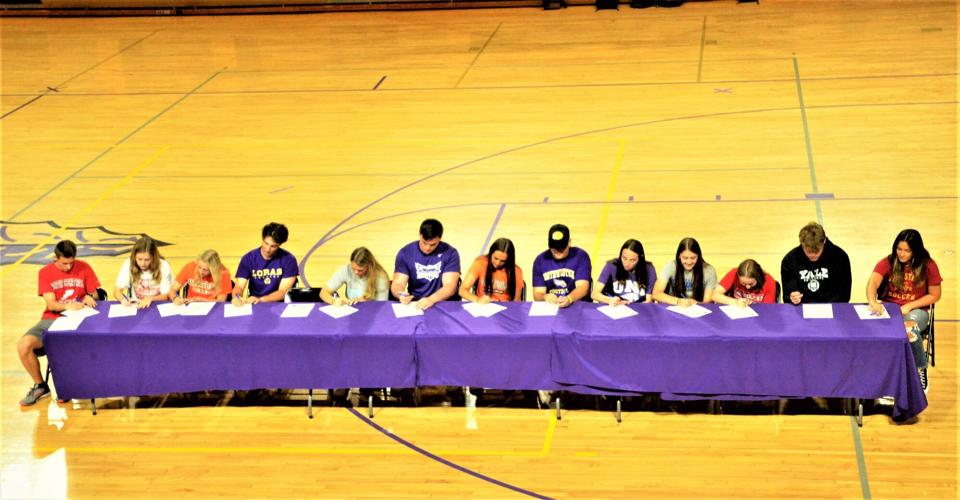 Unlike many of her peers graduating with the Class of 2022 who participated in sports at Muscatine High School, Mya Jansen knows what it’s like to not be a Muskie.

Entering high school, Jansen and her family — parents Travis and Bridgette and younger sisters Hannah and Peyton — spent a year and a half living in Waunakee, Wis.

But Wisconsin never felt quite right to the eldest daughter of the Jansen clan.

“Muscatine has always been my home,” Jansen said. “When I moved away, it was sad to think that I would never play sports or experience high school with the people I grew up with. So when I found out that I was moving back, I was so happy. I was finally going to be a Muskie and play sports with my best friends again.”

Her time spent in the classroom and on Muskie athletic teams has set Jansen up to continue at Wartburg College, where she’ll join the women’s soccer team.

Jansen was one of several student-athletes recognized at Muscatine High School on Friday at an athletics signing day ceremony for all who will continue to play sports after graduating with the Class of 2022.

“I am so excited for the next four years at Wartburg,” said Jansen, who led the Muskie girls soccer team in goals scored last season with 20 and was all-state in the team’s march to the state tournament. “I cannot wait to join such a competitive program and continue to grow as a soccer player. It has been a school that I have been interested in since my freshman year, and as I went through the recruiting process, I just kept on coming back to it. It was apparent that it was the school for me regarding both soccer and academics.”

The current girls soccer team, ranked 10th in 3A with a 9-4 record and is in the thick of the hunt for a Mississippi Athletic Conference title, rosters seven players who will play soccer beyond high school (including Abby Kemper, who attends Loiusa-Muscatine High School but plays for the Muskies and will attend and play for the women's soccer team at Scott Community College).

One soccer player, Ashlyn McGinnis, is not among them, however. McGinnis — MAC honorable mention as a senior setter this past fall — will play volleyball at the University of Dubuque. She accumulated over 500 assists in a Muskie volleyball uniform.

All-MAC teammate Meredith Connor will join Jansen on the Wartburg soccer team. And the team also is sending first-team all-stater Sophia Thomas to Iowa State to compete in the Big 12.

Nearly all of those recognized were multi-sport athletes over their prep careers. Thomas even suited up in pads for the Muskie football team as a kicker.

“Having Sophia on the team this year was great.” Muscatine head football coach D.J. Hawkins said. “At first, I think she was a little nervous as she wasn't quite sure what to expect, but she got over that fairly quickly. She is a very competitive individual that stepped up and earned a big role on the team and handled the pressure like a true competitor. I am very glad that her and her parents trusted the coaching staff to allow her to be successful at something she had never done before.”

The Class of ’22 also includes two individuals in Nolan Recker and Abby Lear who put in top-five performances at the state level.

Lear, a multiple-time MAC Swimmer of the Year, accumulated three different top five finishes at state between the 50-yard freestyle and the 100 free. She also had a sixth-place finish in the 100 free. Lear made it to the state meet all four years of high school, including swimming on several relays. She'll swim at the University of Northern Iowa.

Recker will throw shot put and discus for the Yale University track and field team. A school record-holder in the discus, he go back to the Class 4A state track and field meet for the second time after throwing the discus over 183 feet during Thursday night's state-qualifying meet at North Scott. The multi-time Drake Relays qualifier will also go back to Des Moines in the shot put, where his runner-up throw of 52-6 punched a ticket to Drake University's blue oval.

Here is a complete list of those recognized at Friday’s signing day:

DES MOINES — In the leadup to the Class 2A state track and field meet, Spencer Kessel received a visit from an unexpected supporter.

While many sports teams try to create a family atmosphere, the Muscatine soccer teams head into the playoffs with just that as the clubs feature several sibling connections between the teams.

Wapello's Quinn Veach joined a 400-meter relay team that brought back three of the four sprinters that placed third in 2021. With Veach, the relay team did one better in 2022, placing second on Saturday at Drake Stadium in Des Moines.

While the stakes weren't as high on Tuesday night as the Class 3A 10th-ranked Muscatine High School girls soccer team would have liked, the Mu…

Prep of the Week: Second state trip has 'purpose' for Wilton's Hook

The Prep of the Week is making a repeat appearance in the long jump while also joining forces with Beaver teammates on three different relay teams.

DES MOINES — Placing second in the shot put at the Class 1A state track and field meet gave Wapello’s Ryan McDonough a new perspective on the sport.

Muscatine's Nolan Recker dominated the Class 4A shot put competition en route to winning a state title with a throw of 59-9 ¾. The senior's four best were all among the best of the day in 4A.

DES MOINES — Spencer Kessel had to put up with more drama this time around.

US Soccer reaches equal pay agreement for men and women

US Soccer reaches equal pay agreement for men and women