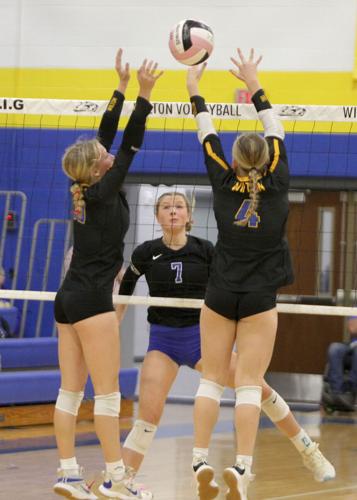 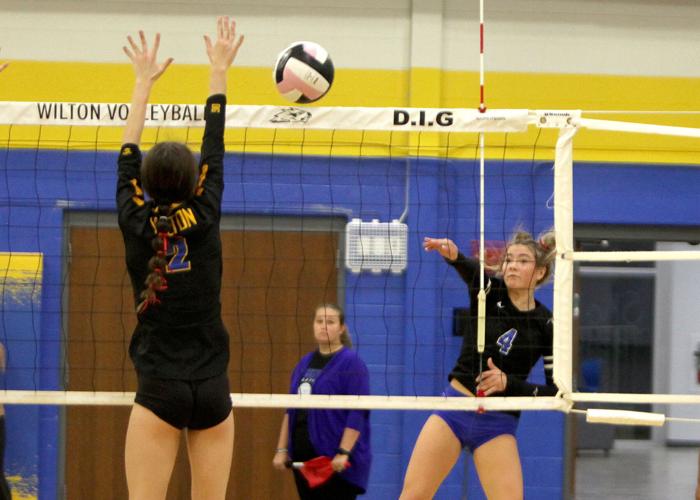 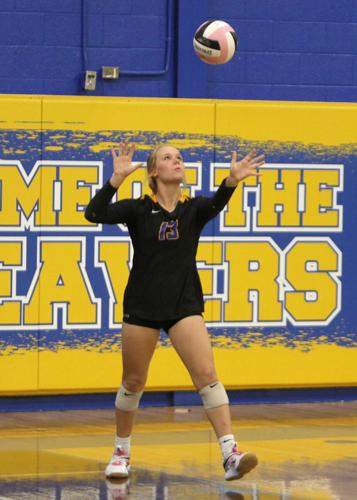 Wilton's Emersyn Guyer serves the ball during a River Valley Conference match against the West Liberty Comets in Wilton on Thursday. West Liberty won the contest in three sets. 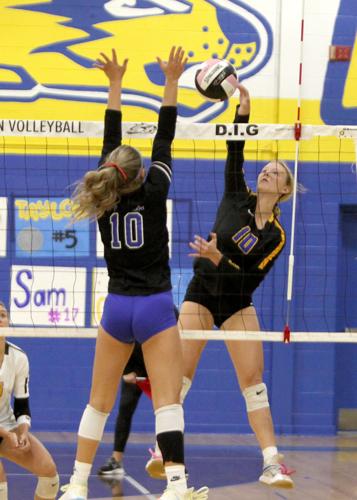 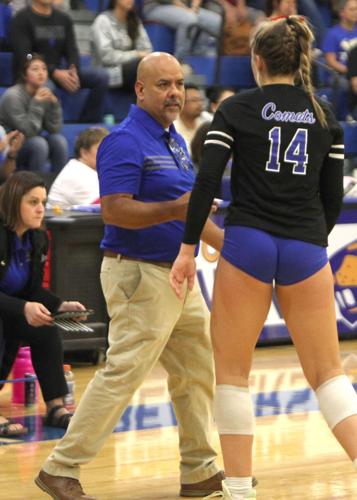 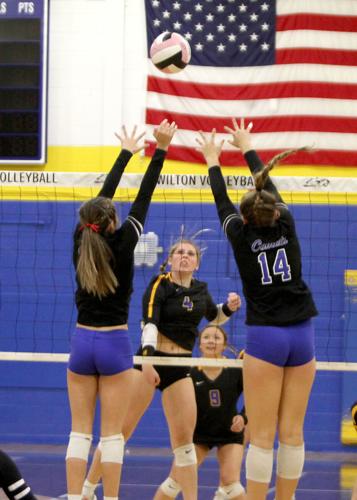 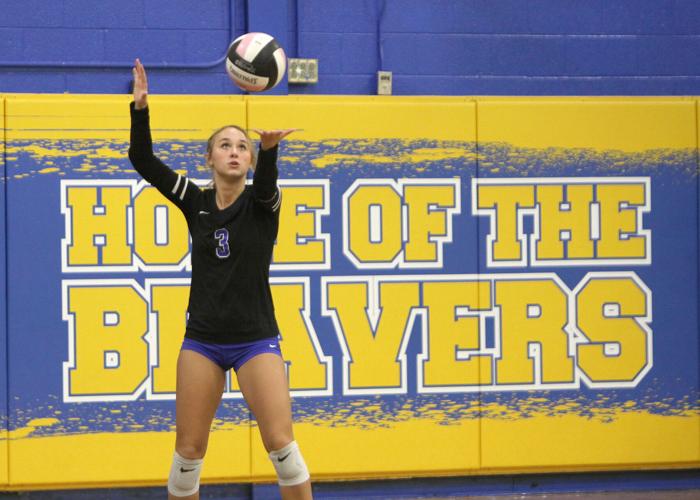 WEST LIBERTY — Sophomore Ava Morrison enjoyed one of the most productive matches of her career with 16 kills to lead Class 3A sixth-ranked West Liberty over 2A No. 12 Wilton.

Morrison had kills to end the first set as well as the match.

West Liberty will be at the Western Dubuque Invitational on Saturday while Wilton is at West Branch on Thursday.

Bears tame Wildcats: Durant couldn't get past 14 points in River Valley Conference South Division play at West Branch, where the Bears took down the Wildcats 25-13, 25-13, 25-14.

Layla Streeter had a team-high 10 kills for Durant (4-15, 0-6 RVC South). Kennedy Jehle had 16 assists and Avery Paper came up with eight digs. McKenna Rockow had the Wildcats' only ace.

Durant will be a participant in the Northeast Invitational on Saturday.

Emily Hemphill and Quinn Veach each had eight kills to lead Wapello (14-18, 5-1 SEISC-North). The two also led the Arrows in digs. Hemphill, who also recorded five aces, had a match-high 21 while Veach tallied 16. Olyvia Malone (13) and Livia Fuller (12) combined for another 25 digs. Setter Jacie Hoeg handed out 21 assists.

Wapello hosts Winfield-Mount Union (17-7, 5-0 SEISC-North) on Oct. 11 to wrap up its conference slate. WACO (20-3, 5-0 SEISC-South) has two matches left in league play. The Warriors host WMU on Tuesday with major implications in the race for a conference title before heading to Columbus the following Thursday.

Howell, serving power Columbus by Lone Tree: After missing time with an injury, Victoria Howell returned to the court for the Columbus Wildcats and went for a team-high 12 kills in a 19-25, 25-23, 25-14, 25-21 home victory over Lone Tree in Southeast Iowa Super Conference North Division play.

The Wildcats finished with 20 ace serves. Seven came from Miriam Ruvalcaba while Sara Vela and Jocelyn Hernandez had four each.

Columbus is at Louisa-Muscatine on Tuesday.

Falcons denied against WMU: With two Southeast Iowa Super Conference North Division matches left, Louisa-Muscatine is still searching for its first conference victory. The Falcons fell 25-15, 25-10, 25-12 on the road in their latest match against Winfield-Mount Union.

L-M (1-16, 0-5 SEISC North) has lost nine in a row since capturing its lone win, that coming against Columbus at the English Valleys Invitational.

WMU (17-7, 5-0 SEISC North) is still atop the conference with WACO remaining on its slate. WACO is also unbeaten in league play.

Louisa-Muscatine is lined up to play in the New London Tournament on Saturday and will return to conference play at home against Columbus on Tuesday.

Columbus second, L-M fourth, Wapello eighth at Heritage Oaks: Columbus Community posted a score of 64 to take second in the boys' race at the Winfield-Mount Union Invitational at Heritage Oaks in Wapello.

Wilton 10th, Durant 11th in Iowa City: The Wilton Beavers finished in 10th place and the Durant Wildcats 11th at the Bud Williams Invitational, hosted by Iowa City High and held at the University of Iowa Ashton Cross Country Course.

Host City High won with a score of 31, with Pleasant Valley the runner-up at 48 and Cedar Rapids Prairie third (60).

Falcons second, Wildcats third at WMU: The Louisa-Muscatine Falcons finished as the runner-up at the Winfield-Mount Union Invitational held at Heritage Oaks Golf Course in Wapello.

Mediapolis scored a meet-best 47 points. Louisa-Muscatine followed with 62 and Columbus was third with 68.

The Falcons' Isabel Stout took sixth individually with a run of 24 minutes, 39.3 seconds. Lexie Eaton came in seventh for L-M at 24:41.9.

Fusco runs season-best time for Durant: Carlie Jo Fusco was the only Durant runner to compete at the Bud Williams Invitational at the University of Iowa Ashton Cross Country Course and turned in her best time of the 2022 season.

Ankeny Centennial's Rondi Quass posted the top individual time at 18:20.91 and Dubuque Senior won the team competition with a score of 33.

The Columbus Wildcats had three members of its football team named to the IPSWA all-state team on Monday, led by Class A first-team returner Triston Miller. Muscatine's Ty Cozad (5A) and Durant's Nolan DeLong (1A) were also first team picks in their class.

The Joens sisters, Courtney and Kelsey, are hoping to join forces and take the West Liberty girls basketball program to the next level, plus a capsule look at the other area schools' outlook entering the 2022-23 season.

VOLLEYBALL PLAYER OF THE YEAR: Buysse set the tone for Comets

In Brooklyn Buysse, West Liberty High School volleyball coach Ruben Galvan got all he wanted in a setter, and more.

WEST LIBERTY -- Although it’s just the first season of sanctioned girls wrestling in the state, several area teams feel ahead of the curve.

A look at this year's Muscatine Journal All-Area football team:

CO-FOOTBALL PLAYERS OF THE YEAR: Cozad, DeLong bonded by craft

Nolan DeLong saw Ty Cozad pull up and couldn’t get the introductions over with fast enough.

Here is this year's Muscatine Journal's all-area volleyball team, which is led by four players from West Liberty's state-qualifying team:

PREP REPORT: Morrison and Garcia-Vasquez star on mat for Comets

A recap of the weekend's prep action, including lots of girls wrestling with West Liberty, Wapello, Wilton and Durant all on the mat.

CR Prairie runs away from Muskies in season opener

The Muscatine High School girls basketball team opened its season at home against Cedar Rapids Prairie on Tuesday night and came up on the wrong end of a 66-32 outcome.

With a new coach comes a fresh start for Muskies

First-year head coach Addison Westercamp hopes to establish a successful program both in the near and long term as she guides the Muskies into the 2022-23 season.

Who has scored the most World Cup goals of all time?

Some prep coaches opt to pray, while others punt

Some prep coaches opt to pray, while others punt

Wilton's Emersyn Guyer serves the ball during a River Valley Conference match against the West Liberty Comets in Wilton on Thursday. West Liberty won the contest in three sets.