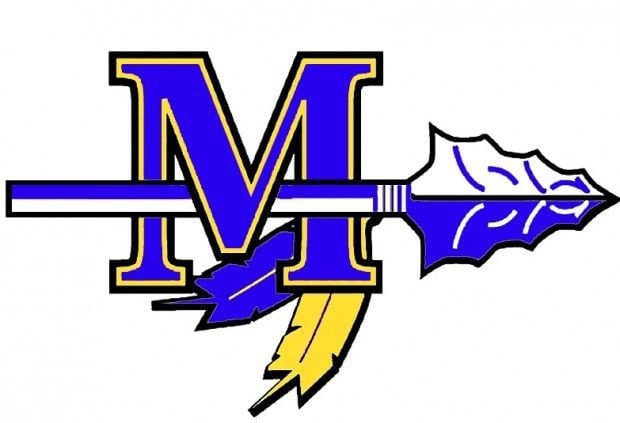 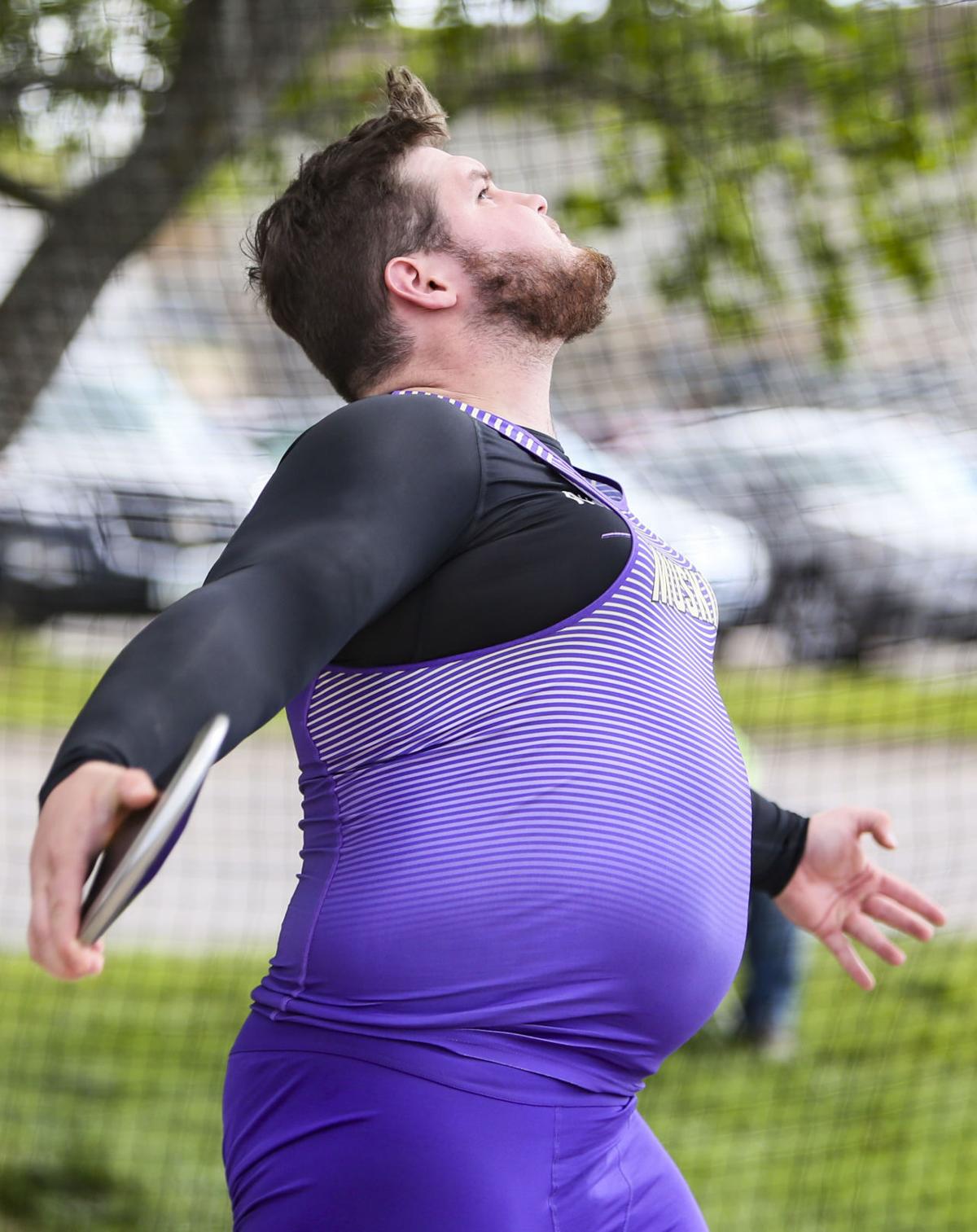 Muscatine's Xander Stoltzfus competes in the discus throw during the Mississippi Athletic Conference boys track and field meet at Brady Street Stadium in Davenport, Thursday, May 6, 2021. 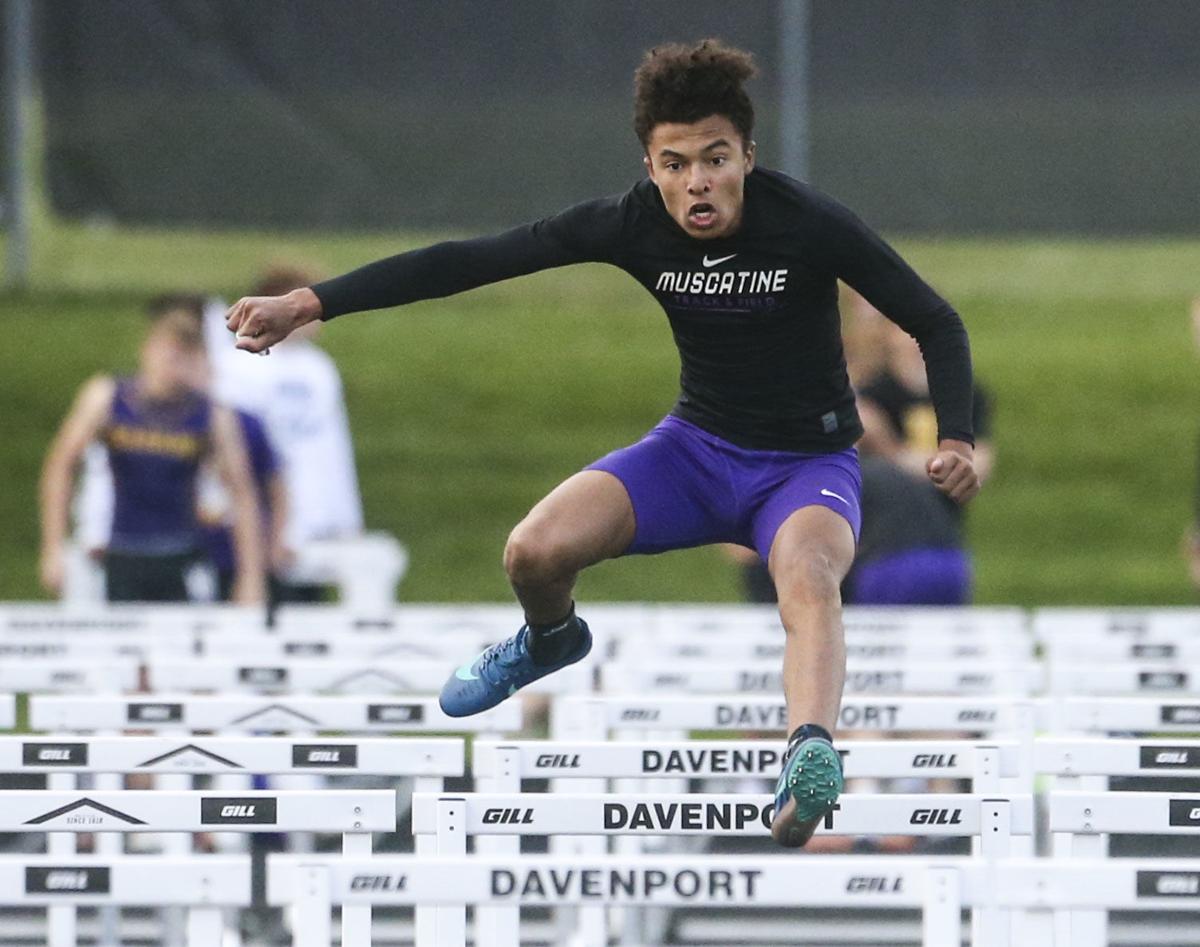 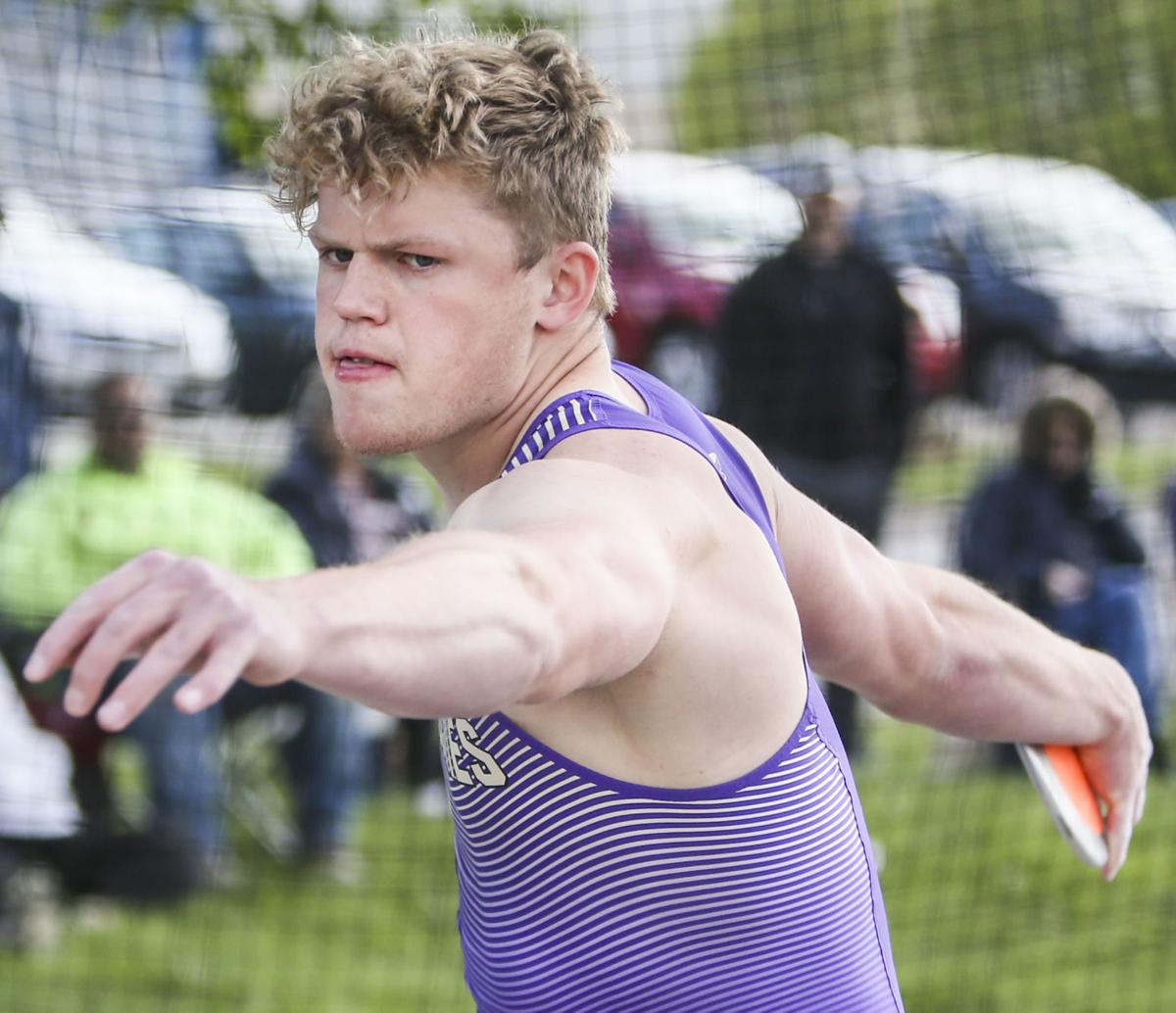 Muscatine's Nolan Recker competes in the discus throw during the Mississippi Athletic Conference boys track and field meet at Brady Street Stadium in Davenport, Thursday, May 6, 2021.

DAVENPORT — With a throw of 156 feet, 9 inches, Nolan Recker became the 2021 discus champion of the Mississippi Athletic Conference.

The junior Muskie beat out Assumption's Tyler Maro for the top spot. Maro came in second with a throw of 154-03. North Scott's Zach McMillian placed third at 149-07.

Muscatine also received wins in the 400-meter dash as Noah Yahn finished with a conference-best time of 50.93, beating Clinton's Addison Binnie by over a second and a half.

Recker also scored eight team points in the shot put with a second-place finish. Recker threw 49-08 to be runner-up in that event. Clinton's Joe Simpson won with a toss of 53-01½.

Zepeda and Mears, along with Tade Parsons and Caden Thomas also won the 800 sprint medley with a time of 1:38.78.

Thomas provided the Indians with scoring as an individual as well. he won the 200 and 400. His time of 23.05 was a half-second better than Mediapolis' Anthony Isley. Thomas' 50.79-second effort in the 400 was also a winner. Isley took second there as well, finishing at 52.20.

Zepeda, Thomas and Parsons were also members on the Indians' winning 4x100 team with Jake Gustison. The team ran a time of 44.83 to edge Highland's 45.94.

Muscatine takes 10th at MAC: The Muskies scored 22 team points to finish in 10th place at the Mississippi Athletic Conference meet at Clinton.

Among the best finishes for Muscatine was the 4x800, which came in fifth. The team, which consisted of Gwen Kuhl, Ruve Roos, Ella Brewer and Abigail Yahn, ran a time of 10:59.02.

Louisa-Muscatine second at SEISC meet: The Falcons' score of 129 was only beaten by Pekin's 195.

Sanders also was second in the long jump with a leap of 15-05.

Shafer was a member of the first place 4x100 team from Wapello. Shafer was joined by Ada Boysen, Lindsy Massner and Gracie Gustison to run the race in 52.70 seconds.

Melendez PK the difference in Muskie win: Miles Melendez scored on a penalty kick in Muscatine's match against Bettendorf, which stood as the only score of the game as the Muskies fought for a 1-0 win.

Muscatine goalkeeper Logan Wulf also came up big for the Muskies in keeping the Bulldogs scoreless.

Muscatine hosts a tournament on Saturday where it will play Burlington and Dubuque Hempstead at Muscatine Soccer Complex.

The Muskies and PV play the final game of the regular season on May 17.

Muskies get two PRs, tie for 6th: Kenni Hawkins recorded her best 18-hole score by shooting a 102 for Muscatine at the Burlington Grayhound Invitational.

Kate Manjione also put in her best nine-hole performance en route to shooting a 109 over the 18-hole round.

As a team, the Muskies shot a 441, which tied Davenport Assumption for sixth in the nine-team field at Flint Hills Golf Course.

Washington had the low team score with a 322. Bettendorf came in second at 364. Davenport North slipped into the top three with a 403, just three strokes better than Fairfield.

MHS scores point at Day 1 of MAC meet: Sam Emmert scored a pair of first round wins at the first day of the Mississippi Athletic Conference boys tennis tournament in Eldridge.

Emmert beat Joey Stier of Davenport North 8-2 for a singles win in the first round. Emmert then teamed with Trey Ulses for an 8-3 doubles win over Zubair Mahmood and Adam Nikulski of Assumption.

The early-round wins amounted to one point for Muscatine, which stands in ninth out of 10 teams after the first day of competition. Pleasant Valley (18 points) sits in first place while Bettendorf (9.5) is in second and North Scott (nine) is in third.

Is Chris Paul's shoulder injury behind him?

How much should you buy into the Astros after claiming best record in American League?

How much should you buy into the Astros after claiming best record in American League?

Trailing 4-0 heading into the bottom of the third, the Muscatine baseball team exploded for 10 runs behind three extra-base hits to put Game 1…

Muscatine's Xander Stoltzfus competes in the discus throw during the Mississippi Athletic Conference boys track and field meet at Brady Street Stadium in Davenport, Thursday, May 6, 2021.

Muscatine's Nolan Recker competes in the discus throw during the Mississippi Athletic Conference boys track and field meet at Brady Street Stadium in Davenport, Thursday, May 6, 2021.