In honor of Independence Day, The Muscatine Journal is providing unlimited access to all of our content from June 28th-July 4th! Presented by Quad City Bank & Trust Member FDIC 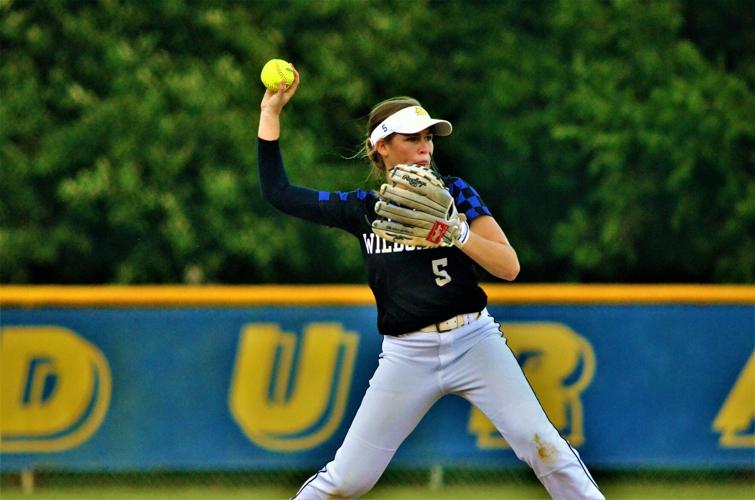 Durant's Ally Happ fields a ball at shortstop and throws to first for an out during the first inning against the West Liberty Comets in a River Valley Conference game at Durant High School on Tuesday. Durant won the weather-shortened contest, 3-1. 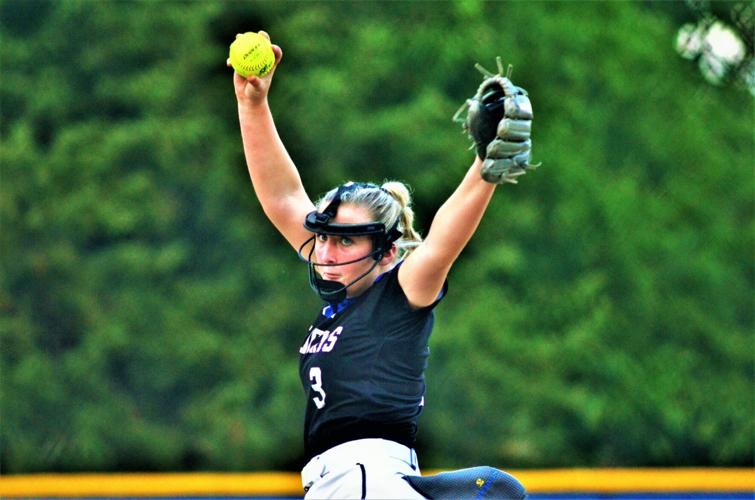 Durant's Kylie Schult throws a pitch during the first inning against the West Liberty Comets in a River Valley Conference game at Durant High School on Tuesday. Durant won the weather-shortened contest, 3-1.

Despite surrendering the lead late, the Durant Wildcats came away with a River Valley Conference South Division win at home Tuesday night over the Class 3A fourth-ranked West Liberty Comets.

The Durant Wildcats held a 3-1 lead entering the sixth inning against the Comets. And despite West Liberty pushing across three in the top of the sixth, the runs would be wiped away due lightning not allowing the game to be concluded, meaning Durant's 3-1 lead stood as the final.

The Wildcat victory denied West Liberty an outright RVC South title. The Comets have clinched at least a share, and will have two more RVC South games to get a league title by itself for the first time since 1986.

Avery Paper drove in the first run for the Wildcats (9-14, 6-4 RVC) to tie it at 1-1 in the second. Hannah Peel added an RBI in the fourth and the Wildcats added one more unearned run for the victory.

Kylie Schult got the win in the circle while West Liberty's Sailor Hall took the loss.

Finley Hall ended with a triple and a double for West Liberty (13-4, 11-1 RVC). She scored the game's first run on a Durant error.

Kinsey Drake drove in three runs for Wilton (19-5, 7-4 RVC) while going 2 for 3 at the plate. Taylor Drayfahl and Peyton Souhrada each had two Beaver RBIs while Charlotte Brown and Hayley Madlock chipped in one apiece.

Brown got the win in the circle, throwing a complete game and striking out 11 hitters.

Columbus takes down Wapello: The Columbus Wildcats went on the road and beat the Wapello Arrows, 13-6, to sweep the season series against its Southeast Iowa Super Conference North Division adversary for the first time in 10 years.

Wapello (12-9, 6-6 SEISC) had two RBIs apiece from Morgan Richenberger and Livia Fuller plus one from Ada Boysen, but was well short in putting together a comeback bid. The Arrows led 3-2 after one inning, but it was all Columbus after that.

L-M wins in five: The Class 2A seventh-ranked Louisa-Muscatine Falcons were home for a Southeast Iowa Super Conference North Division game against Lone Tree that ended in a five-inning, 4-0 win for the Falcons as the game was called on account of inclement weather.

The Bears prevailed 10-6 after scoring four runs in the top of the ninth.

West Liberty at Durant game suspended: The River Valley Conference South Division contest at Durant between the Wildcats and West Liberty Comets was suspended in the fourth inning with the Comets leading, 5-1.

Play will be picked up at Durant on Friday.

Caleb Wulf drove in three and Colin Cassady scored one in the early goings for West Liberty.

Muskies outlast 3A No. 9 CCA on Cantrell's winning sacrifice

Though it's been a tough season for the Muscatine High School baseball team thus far, good things happen when Ethan Cantrell is up with the ga…

DURANT — Coming into the season, Durant High School baseball coach Shawn Dierick saw an opportunity for someone to unlock the Wildcats’ potential.

Behind its two seniors, Bree Seaman and Karly Ricketts, the Class 5A fourth-ranked Muscatine High School softball team moved to 27-2 on the season by completing a two-game sweep of Davenport West at Kent-Stein Park on Monday.

West Liberty finishes what it started against Durant

After a strong start Tuesday against Durant was suspended due to weather, West Liberty pitcher Drake Collins took the mound again Friday and continued to keep the Wildcats at bay, pitching three shutout innings in a 6-1 win.

PREP REPORT: Cantrell comes up a winner for Muskies

The Muscatine baseball team was among the winners in prep baseball and softball action on Wednesday.

Assumption stays perfect in MAC, sails to sweep of MHS

After the Muscatine Muskies got an upset win over Class 3A ninth-ranked Clear Creek-Amana on Wednesday, the Muskies were less successful Thursday night, losing both games of a MAC doubleheader to 3A top-ranked Davenport Assumption, 10-2 and 21-0.

U.S. swimmer rescued by coach after fainting at world championships

Durant's Ally Happ fields a ball at shortstop and throws to first for an out during the first inning against the West Liberty Comets in a River Valley Conference game at Durant High School on Tuesday. Durant won the weather-shortened contest, 3-1.

Durant's Kylie Schult throws a pitch during the first inning against the West Liberty Comets in a River Valley Conference game at Durant High School on Tuesday. Durant won the weather-shortened contest, 3-1.