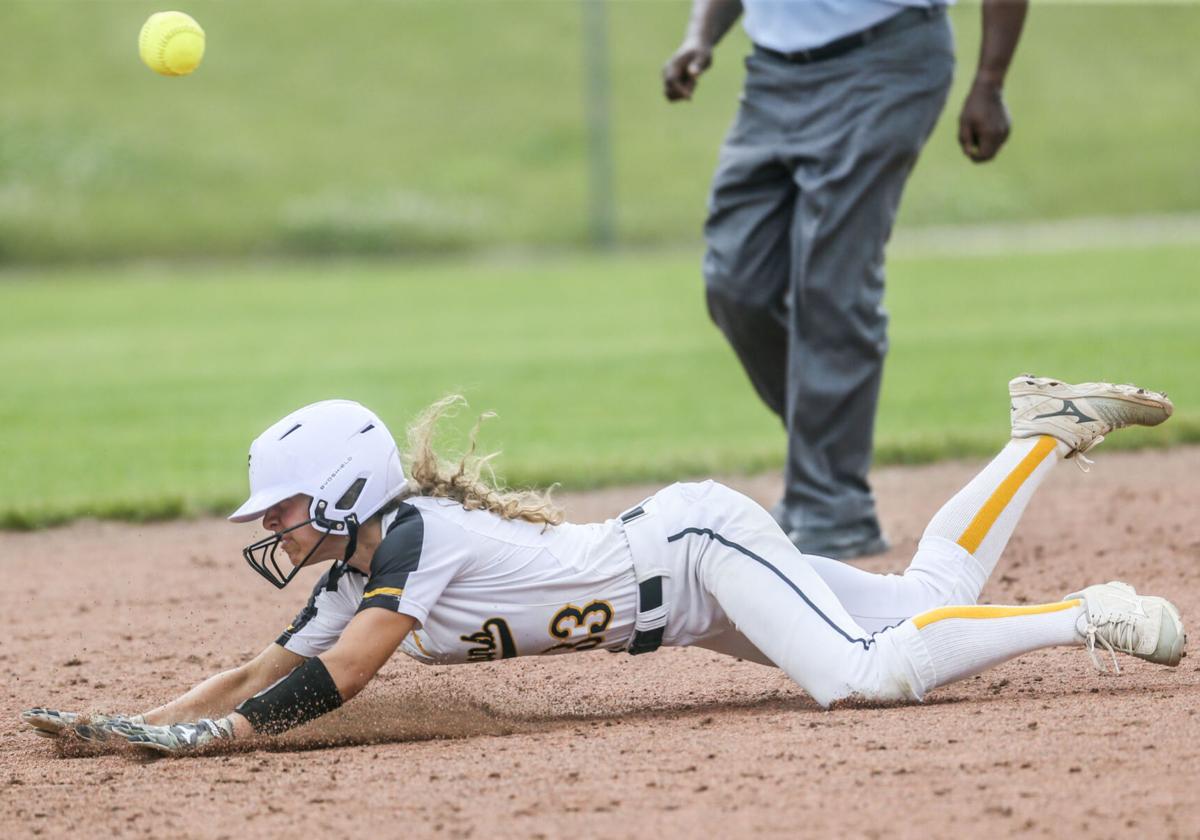 Louisa-Muscatine's McKenna Hohenadel dives into second base during a game against Bettendorf earlier this season. Hohenadel has been one of the Falcons' most reliable hitters this season with an average over .500. 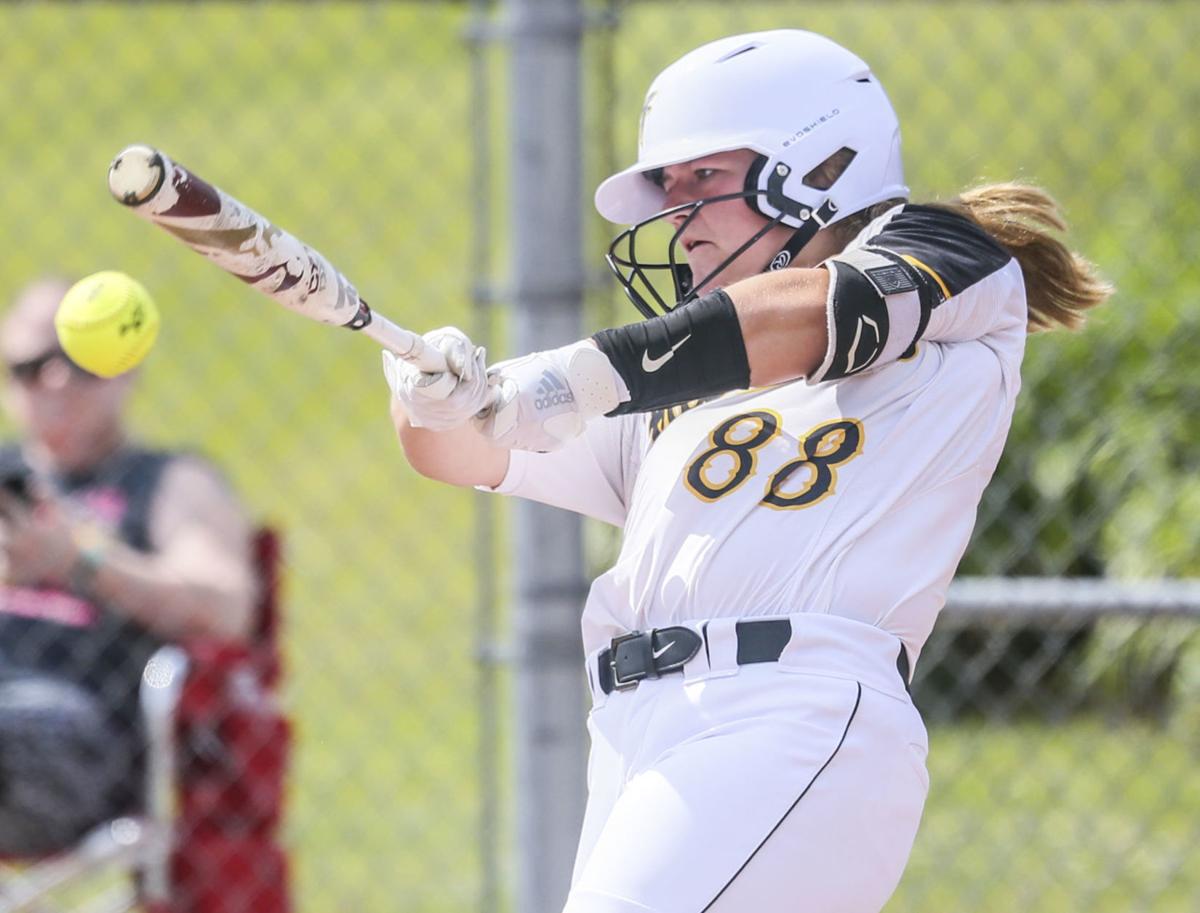 Louisa-Muscatine's Morgan Stecher connects on a pitch during Saturday's doubleheader against Bettendorf. Stecher homered in the second game.

Louisa-Muscatine has played in back-to-back state championship games. It features an all-state pitcher in Hailey Sanders and four other returning starters from last year's 35-win season.

But with most weekend softball tournaments called off this summer because of COVID-19, the Falcons needed to find an alternative way to challenge themselves outside the Southeast Iowa Super Conference.

So coach Bryan Butler added some heavy hitters from the Mississippi Athletic Conference — Bettendorf, Pleasant Valley and North Scott — to the Falcons' schedule.

The second-ranked team in Iowa Class 2A showed it can hold its own, earning a split with 5A 15th-ranked Bettendorf on Saturday at Bettendorf High School.

L-M scored on a wild pitch in the seventh inning to take the opener, 4-3. Bettendorf retaliated with three home runs to snare Game 2, 13-8.

"Our conference is not that good, so every opportunity we get to take advantage of playing good teams is amazing," said L-M junior shortstop and all-stater Kylee Sanders, whose team has won more than 50 straight league games.

Hailey Sanders, a Northern Iowa signee, recorded eight strikeouts. Bettendorf did have three hits, all doubles, to stay in reach.

Breanna Newton and Sophia Del Vecchio had back-to-back doubles to key a two-run sixth inning to tie the game.

Then in the seventh, Jersey Lessenger, Kylee Sanders and McKenna Hohenadel reached consecutively to load the bases for L-M (6-1). Emily Rigdon relieved Del Vecchio, but her first pitch got past catcher Emma Dennison to score Lessenger for the go-ahead run.

Hailey Sanders worked a perfect seventh to seal the victory.

"It shows we won't give up," said Kylee Sanders, who had three hits and reached base all four times in Game 1. "We'll always chip away. We play as one whole. Hailey is a good pitcher and we have her back."

Given the first game was each team's top lineups and No. 1 pitchers, Butler called it a very gratifying victory.

"That was a great win," Butler said. "What I like about playing these teams is they don't give you cheap runs. You're not going to exploit kids that aren't as developed.

"You earn every run, and they put the ball in play a lot more which makes our defense work."

Bettendorf jumped on L-M's Kylee Sanders for eight runs in the first two innings of the second game. Breanna Newton, Dennison and Alexis Mulvehill smashed homers for the Bulldogs, who finished with eight extra-base hits in the doubleheader.

"She was pitching them right down the middle for us and giving us good strikes early in the count," Mulvehill said. "We just took it and made what we could out of it."

McKenna Hohenadel had three hits and three RBIs for L-M in the second game.

The Falcons played without Hailey Sanders in Game 2. The senior left to get home in time for her afternoon graduation party.

L-M chipped away at the deficit and pulled within 8-7 on eighth-grader Morgan Stecher's home run, but Bettendorf responded with a five-run fifth thanks to two Falcon infield errors.

"The second game is a taste of what we can expect next year without Hailey," Butler said. "We learned some things as coaches about our Nos. 2 and 3 pitchers. We need to work them a little harder."

In all, it was a productive opening week for the Falcons. They have games against Bettendorf, PV and North Scott scheduled in July.

"After that Winfield game we won 1-0 (last Monday), we started questioning how we are going to hit the ball," Butler said. "Since then, we've been on a tear.

"We lost some experience and leadership from last year, but our younger kids have played a lot of travel ball. They're going to get opportunities to make plays."

Louisa-Muscatine's McKenna Hohenadel dives into second base during a game against Bettendorf earlier this season. Hohenadel has been one of the Falcons' most reliable hitters this season with an average over .500.

Louisa-Muscatine's Morgan Stecher connects on a pitch during Saturday's doubleheader against Bettendorf. Stecher homered in the second game.