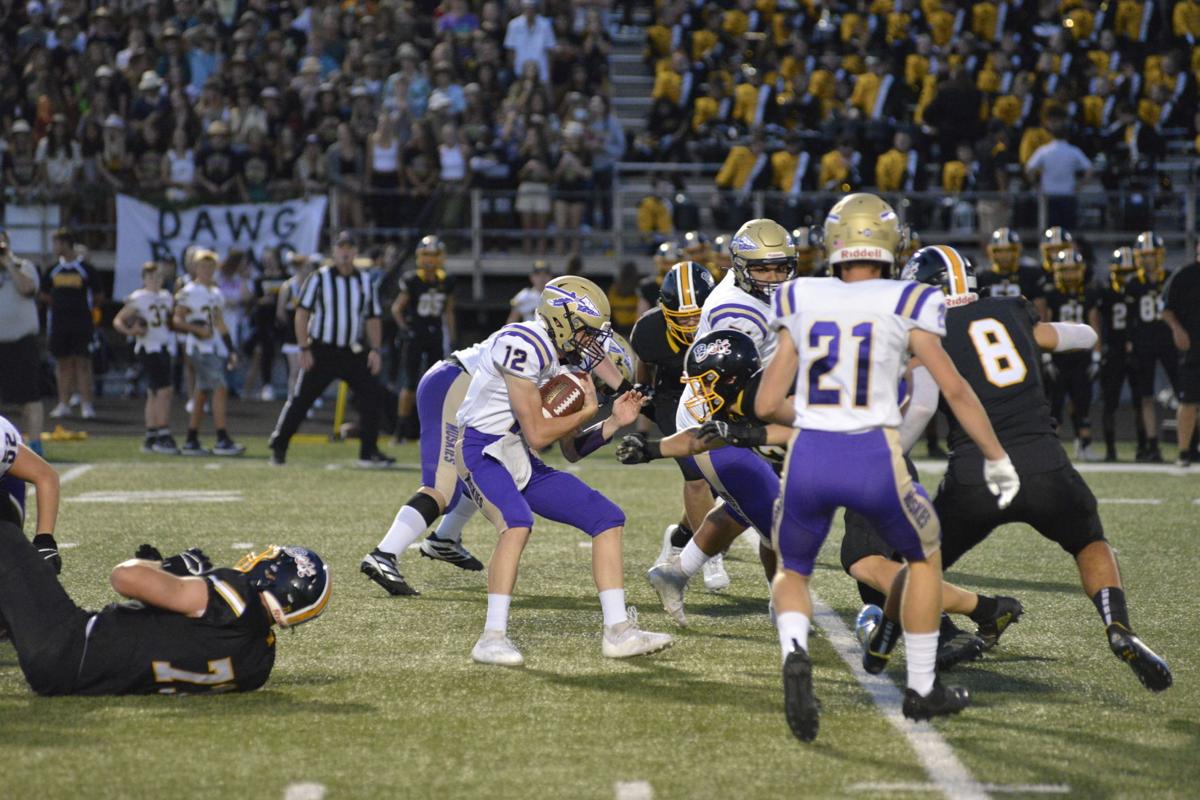 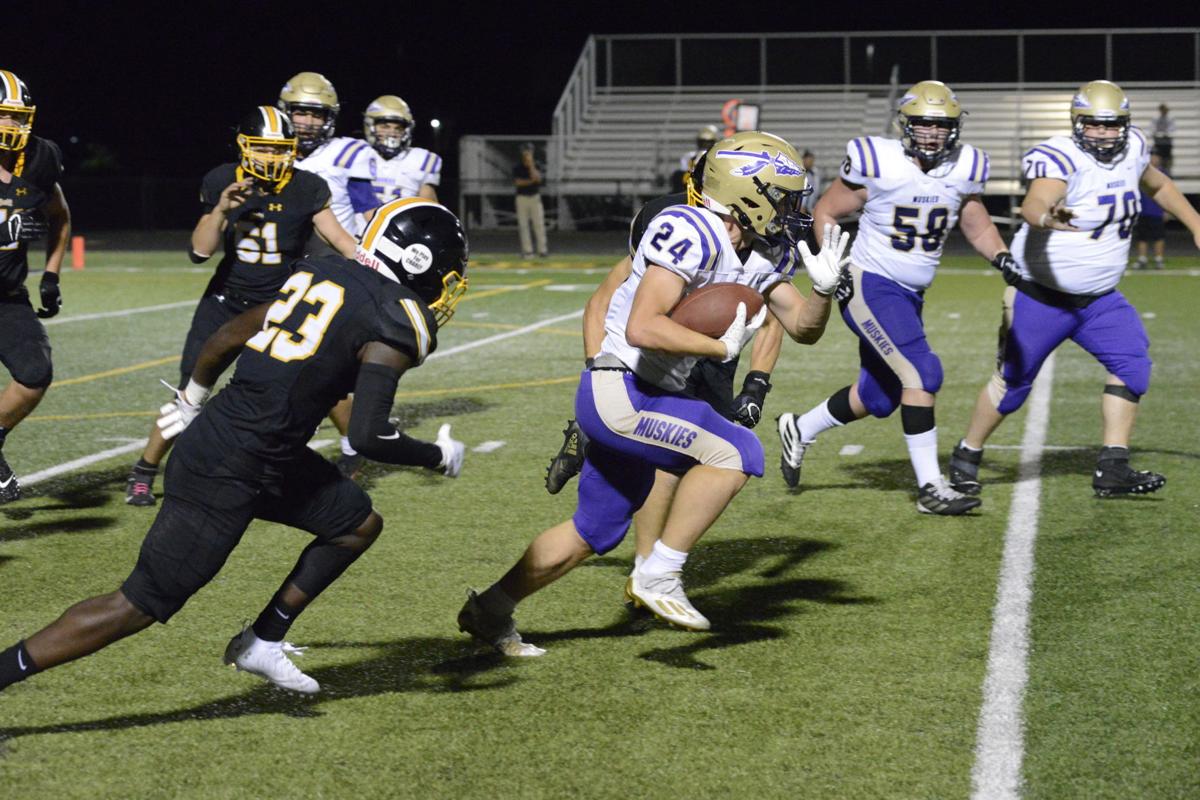 Though the Muscatine football team’s struggles have been evident — as the 0-3 record to start the season might suggest — special teams have not been one of them.

The Muskies will try to continue to build on that when Pleasant Valley visits Muscatine on Friday night, with kickoff slated for around 7:15 p.m. at Muscatine Community Stadium on the MHS campus.

Muscatine has had four players return a kickoff, and as a team, the Muskies average over 27 yards gained on those returns. The biggest came in Week 1, as senior Mason Crabtree returned a Linn-Mar kick 97 yards for a score.

Since then, Brayden Lane nearly scored on another kick return. Though that return didn't reach the end zone, it did set up another Muskie score during Week 2's contest against Iowa City West. Lane, a junior, is averaging 56 yards a return on two chances.

Both of those scores set up extra points from Sophia Thomas, who was talked into putting pads on and kicking for the team after she led the girls soccer team to an appearance at the Class 5A state tournament a season ago and received all-state recognition for those efforts.

"Coach (Scott) Mauck said that (the team) was in need of a kicker, this was only a few days before the first game, and I was like 'Okay, I'll try try it out,'" Thomas said. "So I did, and the coaches said 'You'll get your uniform tomorrow. So it happened really quickly.'"

Though Thomas will admit to some nerves playing on a varsity football field, she's relishing the opportunity, even as she's had to deal with opposing linemen that broke through the line in her face and nearly being in on a tackle on one of her two kickoffs.

"The first game was the first time I've ever put on shoulder pads," said the senior kicker. "It's super nerve-racking. Way more than any other thing I've done in sports."

The nerves of going out on the gridiron haven't been quelled with experience as of yet.

"Not really," she said. "But I am way more comfortable with the guys now. It's a little intimidating just being here, but I'm getting used to it."

Muscatine also has been fairly successful covering not only punts, but kicks as well.

Thomas is 2-for-2 on the season in extra point tries. Conner Christiansen has also been true on one attempt, but after leaving injured last week, Muscatine isn't counting on Christiansen being able to come back this season. The senior's absence will most likely be felt more on defense, where he started in one of the two safety spots and had five tackles.

Battey is 26 of 42 for 186 yards on the season with a touchdown and interception, but the focus offensively for Muscatine should continue to be on sophomore Ty Cozad, who is up to 128 yards on 52 carries. Nolan Recker has chipped in with 139 all-purpose yards on 32 touches. The senior also has a pair of touchdowns.

Pleasant Valley is coming off of a 18-7 loss to the same Linn-Mar team that took down the Muskies to open the season.

Although the Spartans scored a 35-0 win in Week 2 over Dubuque Hempstead, PV suffered a significant injury of its own in starting quarterback Barrett Lindmark, who is unlikely to return Friday.

To replace the senior starter, the Spartans have turned to junior Caden McDermott, who has had more success on the ground than through the air.

Last week, McDermott threw nine passes, completing three for 27 yards while rushing for 80 on 18 carries. He also threw a pair of interceptions.

Still, even if Pleasant Valley is limited in the passing game, there are more than enough weapons at the Spartans' disposal to get the Muskies' attention.

Junior Rusty VanWetzinga has a team-high 235 yards on the ground on 35 totes. McDermott is next with 176 rushing yards on 20 carries while both Tate Lyon and Makhi Wilson have added over 100 more in 2021, with each getting a dozen or more opportunities.

"I told the team this is going to be the best and most physical, coached-up team we'll go against," said Muscatine head coach DJ Hawkins. "They're aggressive. They'll get after. They've had some turnovers, but them being 1-2, they're better than that. They've played good teams.

"Linn-Mar really got after us and got after PV, too. Watching that film, it was quite the game. (Pleasant Valley) has lost to really good teams. ... They're a very talented team."

From the start of the season, the Muskies’ progress can be mapped out by week.

"We're learning the steps," said Muscatine offensive and defensive lineman Michael Cawiezell. "Every Monday we start with film and see what we need to work on. And out on the field, we take the steps we need to for us to keep getting better. ... We've been down a little about the 0-3 record, but we're keeping our heads high. There's a lot of games left for us to prove ourselves.

"From the first to third game, there's been major improvement."

To open the season, Muscatine gave up 14 or more points in each of the first three quarters to Linn-Mar. In Week 2, Iowa City West scored 35 of its 42 points over the middle two quarters. Against Bettendorf, 20 of the 27 points given up by Muscatine were scored in the second period.

"No matter what we do, this teaches us to be better people and go through challenges in life," said the senior Cawiezell.

A bad game, a bad half-game and a bad quarter have amounted to three losses for the Muskies, but growth is there, nonetheless.

"Every week, we're focusing on one thing," said Hawkins, the second-year coach. "Our effort has gotten better, but more guys are having to play both ways to make up for injuries. But this week has been about making plays when we have the opportunity. A lot of the big plays we've given up, we've struggled with tackles, or twice we've had an interception only to have to into the hands of a receiver.

"This week we've been about making the play in the moment."

WHEN: At the conclusion of the freshmen/sophomore game, kickoff approximately 7:15 p.m., Friday, Sept. 17