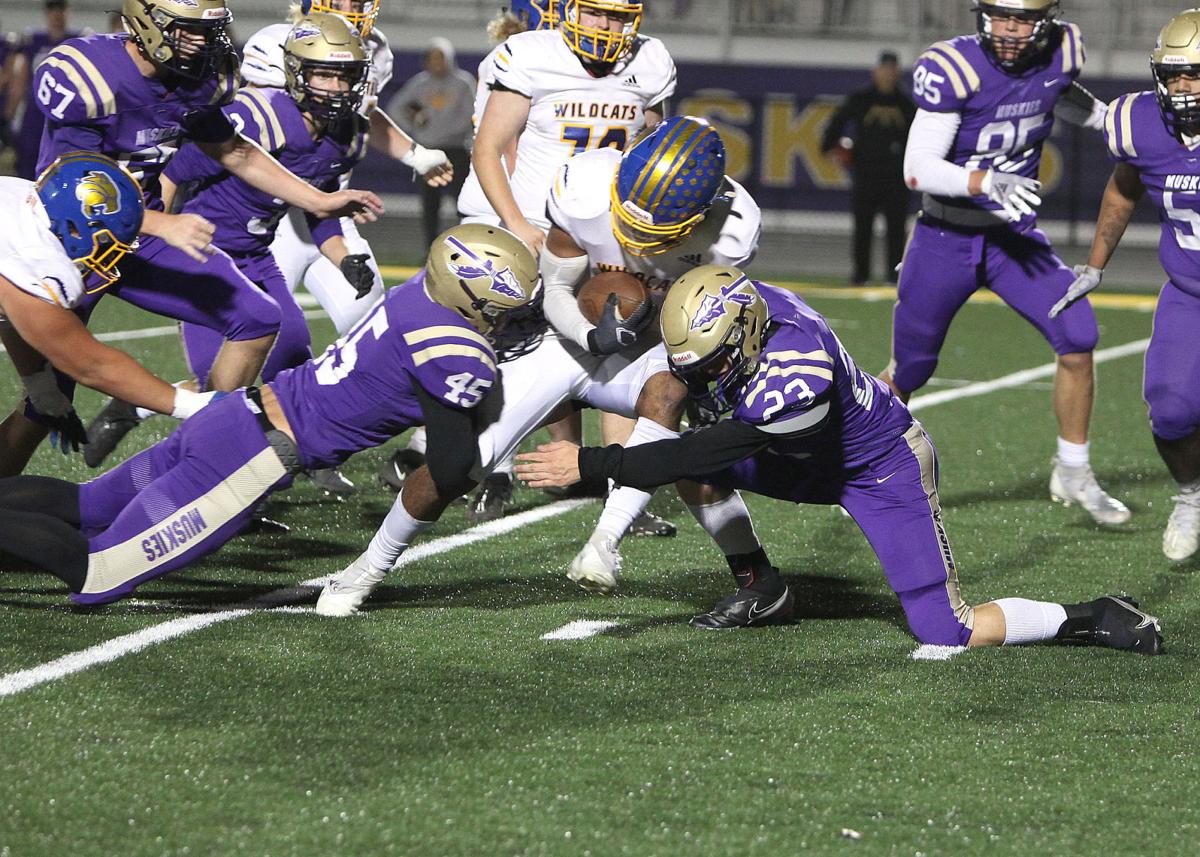 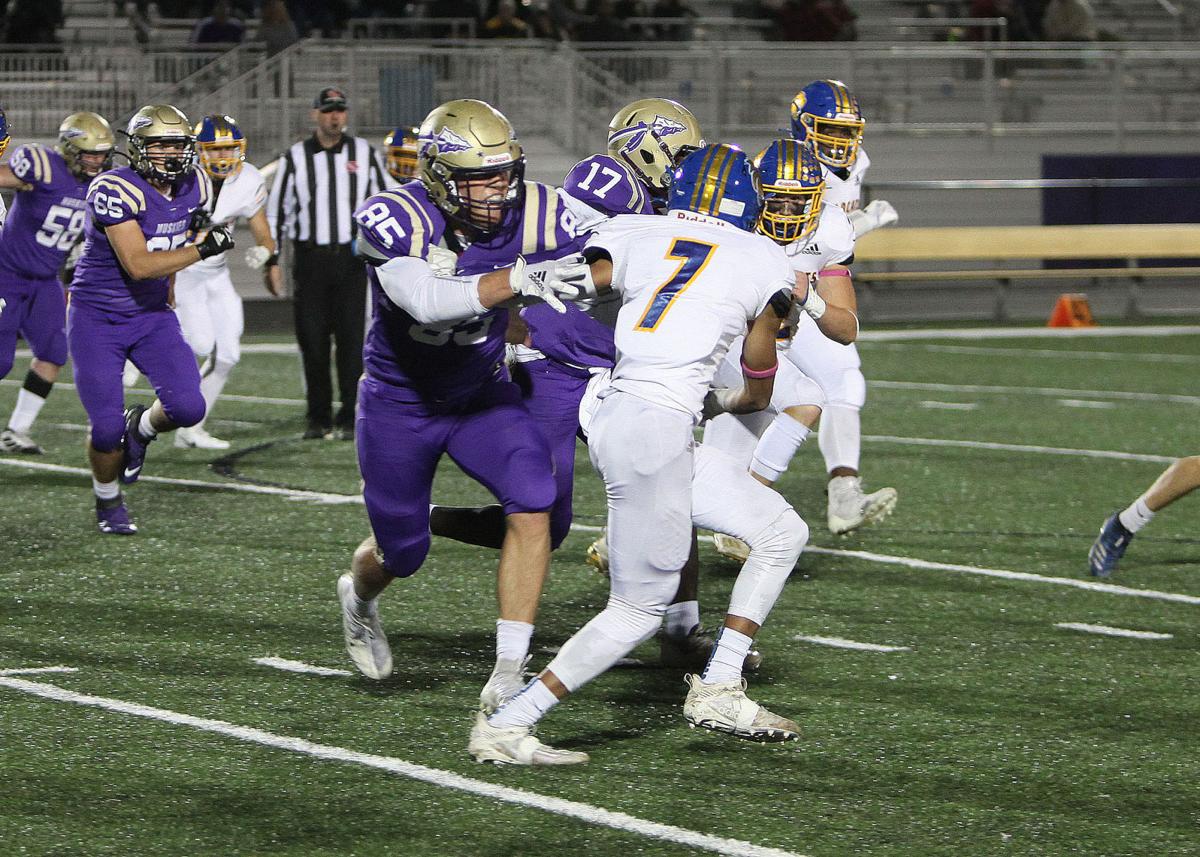 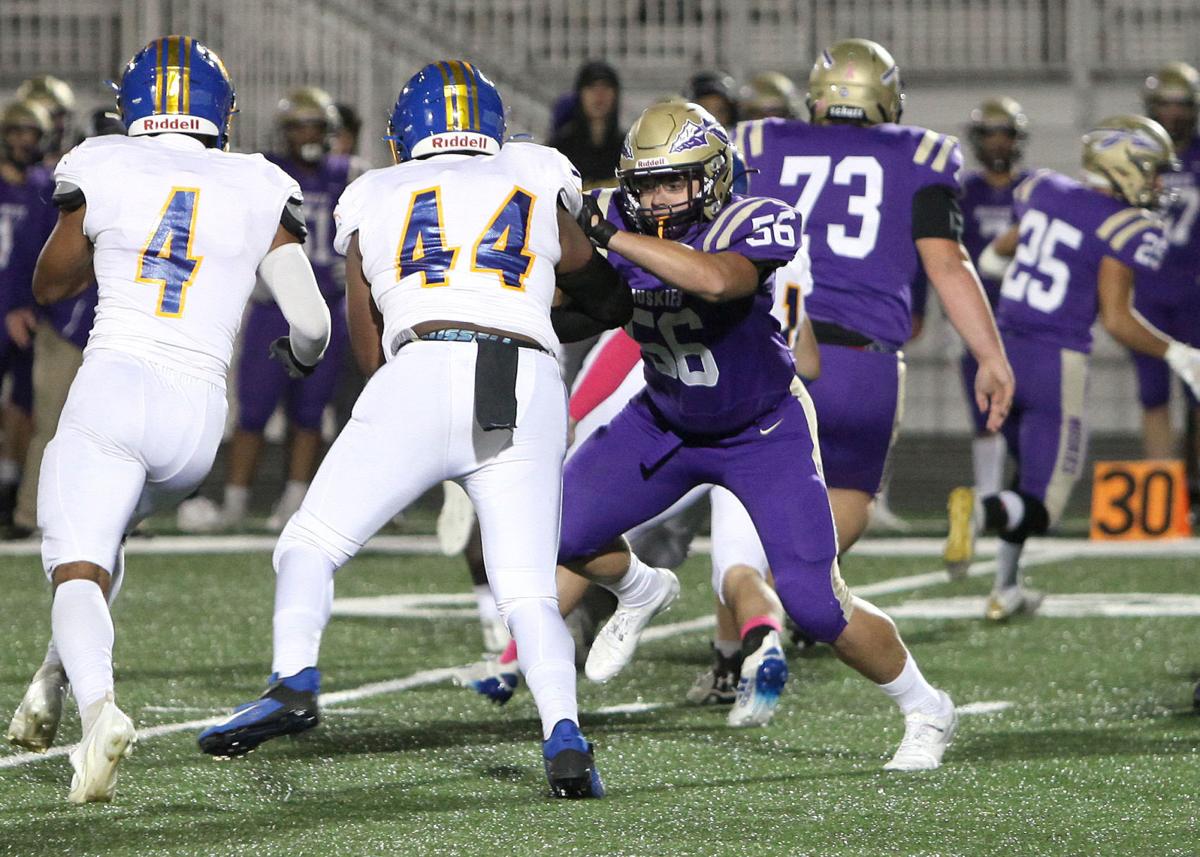 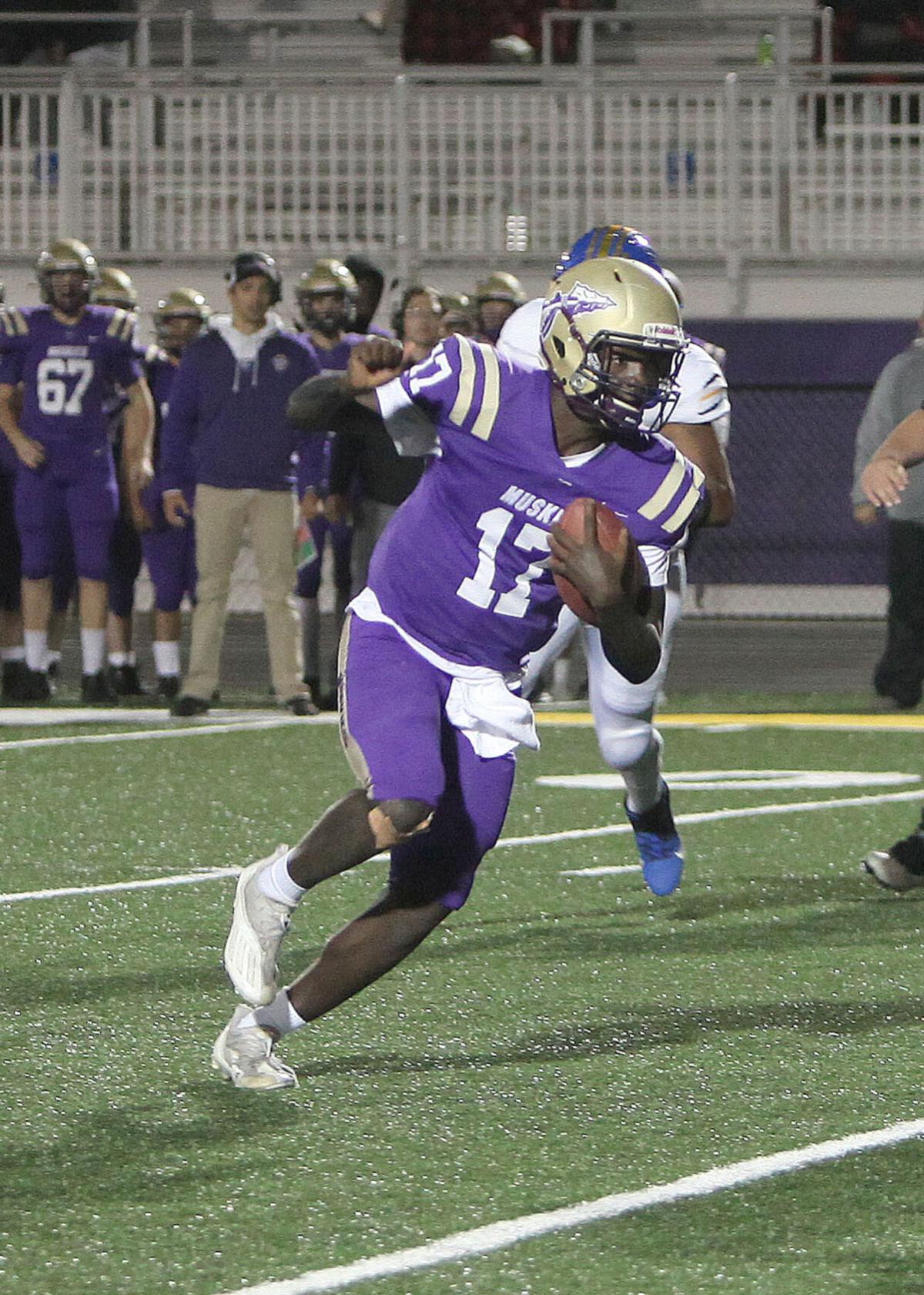 Muscatine's Darnell Thompson runs the ball against Davenport North during the first quarter of the teams' Week 8 matchup in Class 5A football at Muscatine High School on Friday. North won the game, 34-13. 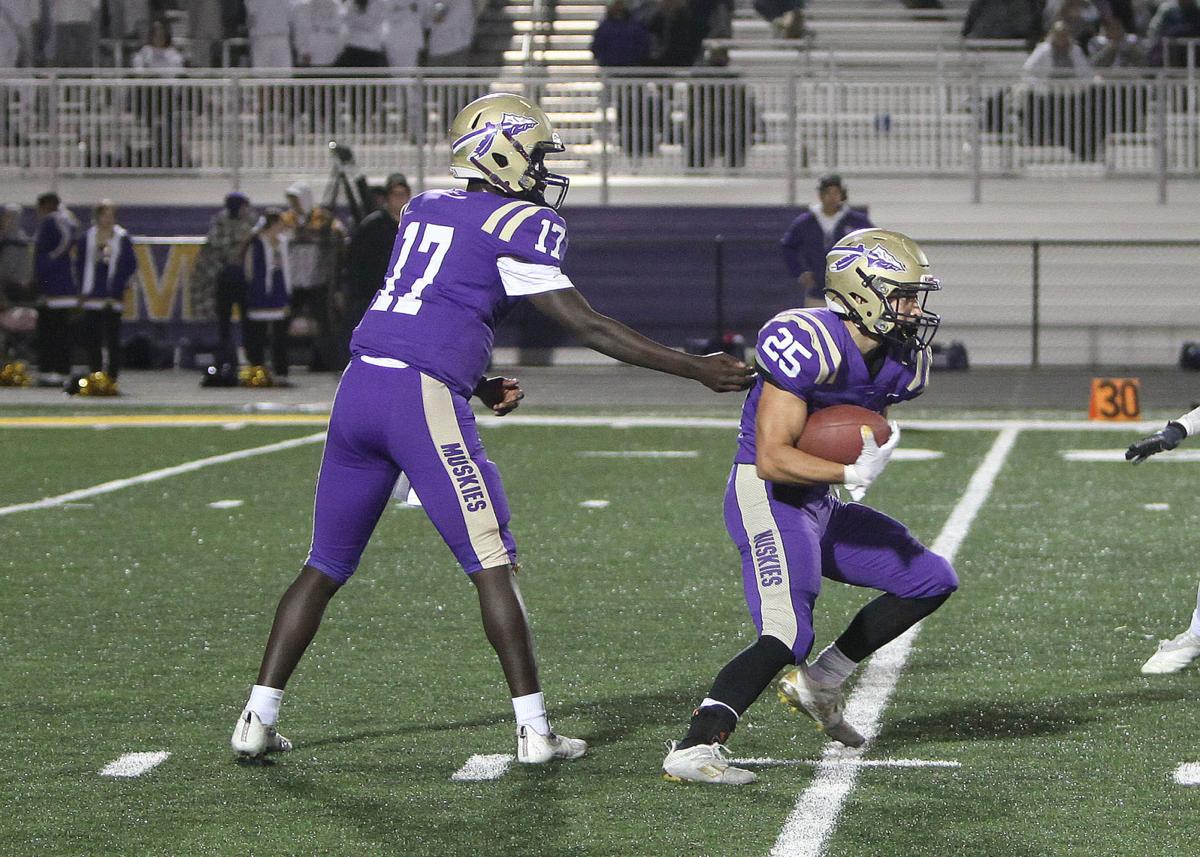 Muscatine quarterback Darnell Thompson hands off to Mason Crabtree (25) against Davenport North during the first quarter of the teams' Week 8 matchup in Class 5A football at Muscatine High School on Friday. North won the game, 34-13.

With the top 16-ranked teams according to RPI in Class 5A advancing to the playoffs with one regular season game left, North entered Friday night's contest at Muscatine High School in 21st, but kept hope alive with a convincing 34-13 win over the Muskies.

"We've put together two good weeks (going back to last week's 34-19 win over Davenport Central)," North head coach Adam Hite said. "We still have some stuff to clean up on our end ... But we played a complete game tonight."

The first three Muscatine fumbles came on three consecutive drives spanning from late in the first quarter to early in the second.

Muscatine was able to avoid further disaster by getting a 94-yard interception return by Darnell Thompson for a touchdown early in the second after the third fumble gave the Wildcats the ball at the Muscatine 26.

"We got a couple turnovers in our favor, but when you turn the ball over like that, it's tough to beat anybody," Muscatine head coach DJ Hawkins said. "(North) went down and scored early to give them some momentum. Then penalties and turnovers killed us."

The first Muskie turnover led directly to a Giovanni Rivera score with 6 minutes, 25 seconds left in the opening quarter.

"We had two turnovers of our own," said Hite. "We had injuries where we had to put guys in some different spots, but that's football ... It was great to see that we had a lot of sophomores step up and contribute in the fourth quarter ...  We're excited, we get to move on to Bettendorf next week and it's probably a win or die scenario. That's how we've been operating the past couple weeks.

"I told our guys we have 12 hours to celebrate and then we're on to Bettendorf, they're the beast of the Quad Cities, they have a rich tradition."

Rivera would add a second score a little more than five minutes after his first to give the Wildcats a 14-0 lead. The senior running back ended with a game-high 134 yards rushing on 23 attempts.

For its part in the equation, Bettendorf beat Cedar Falls 28-0 in hopes of reaching the playoffs for the 24th straight season.

Wildcat quarterback Nolan Mosier would also add a pair of scores on the ground, with each of his coming from just a yard out. Mosier, a junior, went 11 of 20 passing for 142 yards, including a 14-yard touchdown strike to senior Dalton Motley to make it 28-6 in favor of North with over 10 minutes left in the third.

Three different players lined up behind center for the Muskies, who were without starter Landon Battey as well as primary ball-carrier Ty Cozad, as both exited last week's loss to Dubuque Senior and weren't able to go against the Wildcats.

Thompson started as Muscatine quarterback and rushed for 82 yards on 17 attempts as the Muskies looked sharp on a couple early drives but were halted by fumbles.

Nolan Recker also saw time behind center, he ended with 112 yards rushing on 16 totes and also recorded the only two pass completions the for the losing side. Both went to Paul Henry for a total of 15 yards. Those came before sophomore Sawyer Zeck finished the game at QB.

Mason Crabtree carried 15 times out of the Muscatine backfield, taking over for Cozad. He also added a late touchdown from six yards out to close out the game's scoring.

"We know it's not all about wins and losses," Hawkins said. "It's about bigger things, but when you get this many losses in a row (and) we have so many guys playing both ways and selling out, giving everything they have, it's tough emotionally and physically.

"Every week, it's about 'How are we going to get a win?' and the kids are buying in, but we just have to come up with plays, keep ourselves in it and find ways to make it work."

Muskies' depth a source of optimism ahead of new season

The Muscatine High School boys swim team knew coming into the 2021-22 season that it lacked some experience.

Muscatine's Darnell Thompson runs the ball against Davenport North during the first quarter of the teams' Week 8 matchup in Class 5A football at Muscatine High School on Friday. North won the game, 34-13.

Muscatine quarterback Darnell Thompson hands off to Mason Crabtree (25) against Davenport North during the first quarter of the teams' Week 8 matchup in Class 5A football at Muscatine High School on Friday. North won the game, 34-13.