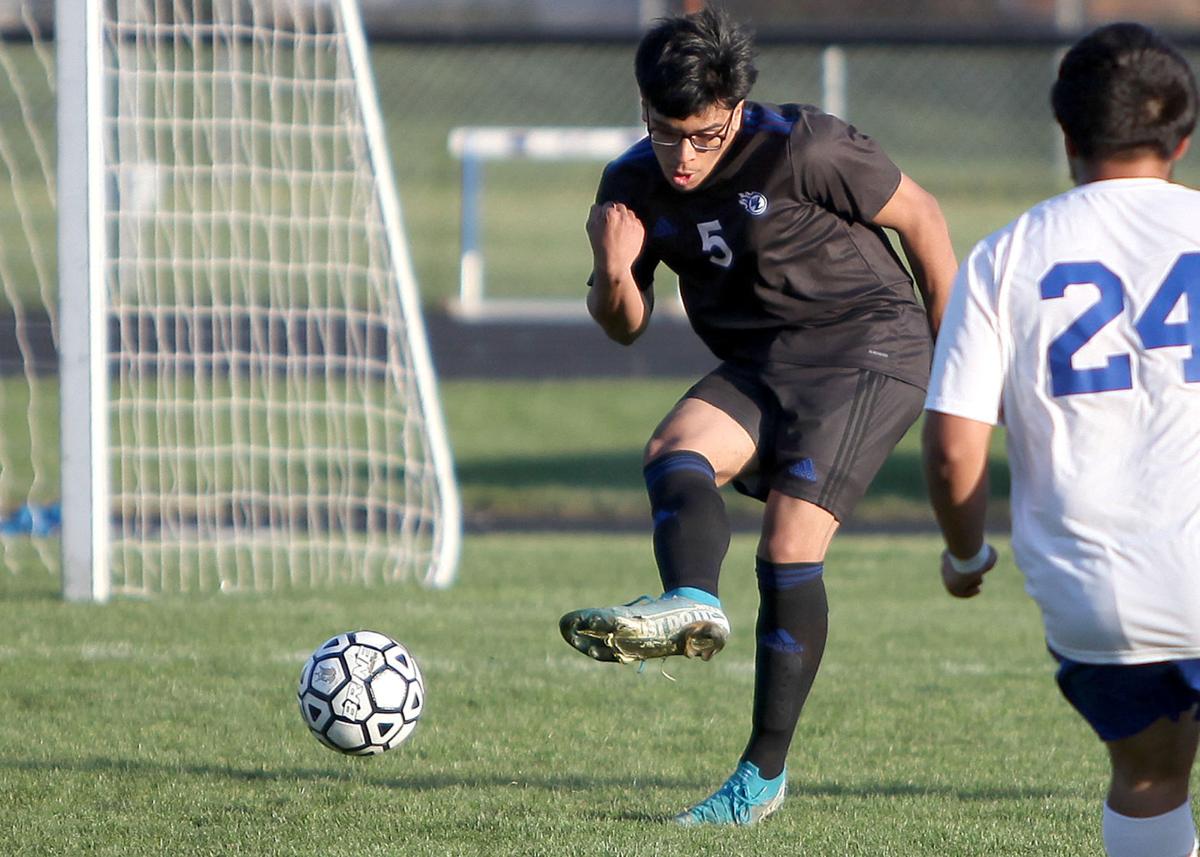 West Liberty's Bryan Martinez-Zavala sends the ball upfield during the first half of Thursday's game against Columbus at West Liberty. 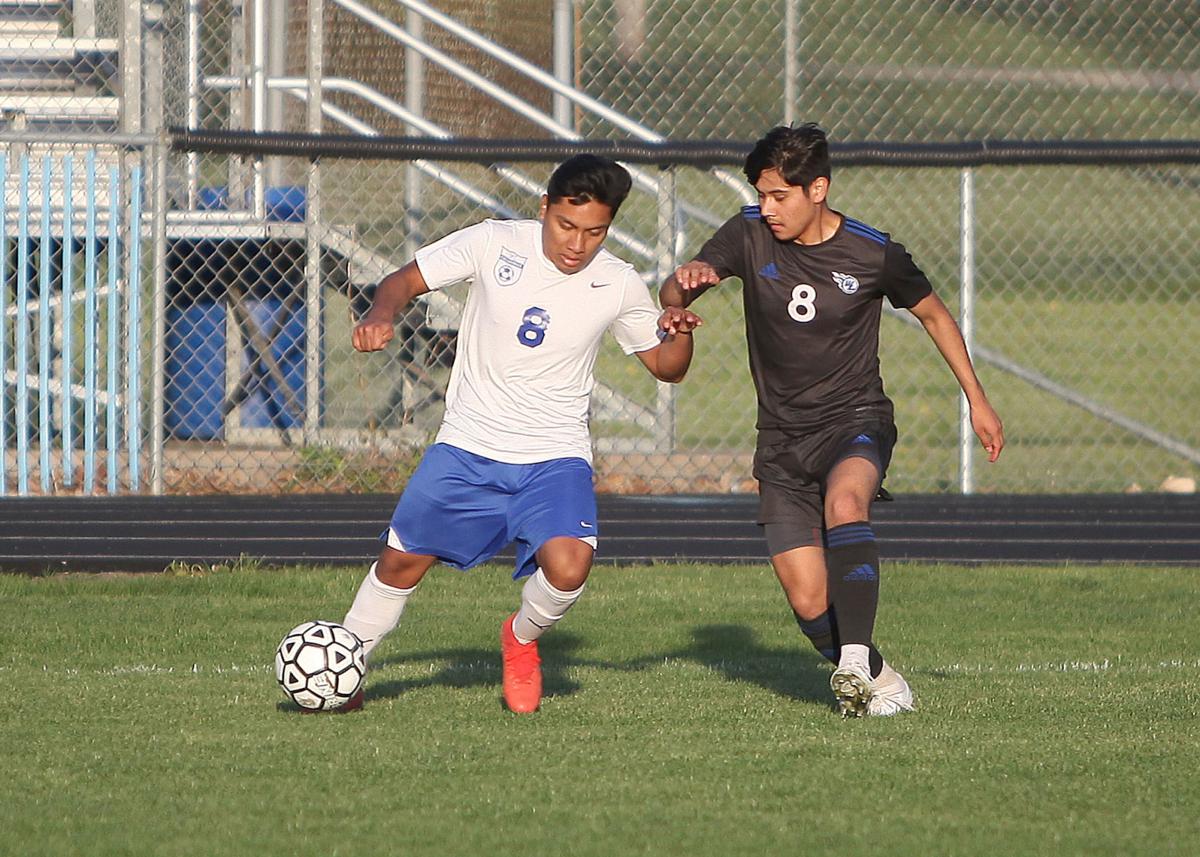 Columbus' Gary Molina works the ball past West Liberty's Joshua Mateo during the first half of Thursday's game at West Liberty. 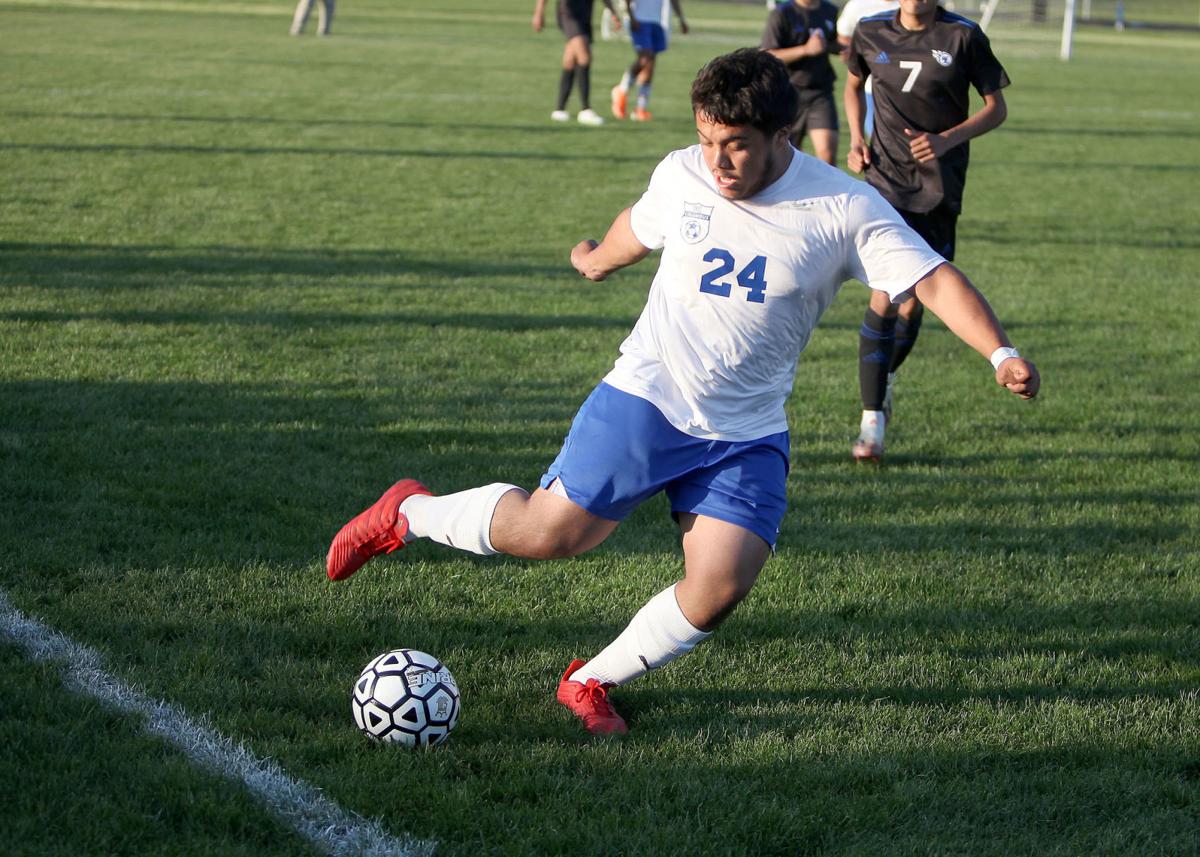 Columbus' Jose Valencia keeps the ball in play and sends it downfield during the first half of Thursday's game against West Liberty.

WEST LIBERTY — Jahsiah Galvan and Juan Mateo combined to score seven goals as the West Liberty Comets came away with a dominant home win against the Columbus Wildcats in a game that pitted two Class 1A ranked teams against one another.

The fourth-ranked Comets completely controlled the tempo throughout, and ultimately scored a 10-0 win at West Liberty’s Memorial Field on Thursday night. Unable to come up with a score, the No. 13 Wildcats were only able to put three shots on goal, all of which were saved with relative ease by Comet keeper Ruben Meraz.

With the double-digit lead in hand, the game was called in the 72nd minute.

West Liberty (7-2) has now won four straight. The victory over Columbus was the second consecutive 10-0 win for the Comets.

Though it was the junior Galvan with four goals and sophomore Juan Mateo with three who did most of the work early — and late — for West Liberty, it was Joshua Mateo who really broke things open for the Comets in the second half, scoring two goals in the span of as many minutes. That run started in the 62nd minute and ended with West Liberty leading 7-0.

"(Controlling the tempo) is our game, that's how we like to play," Galvan said. "We like to possess the ball. ... I have a great team around me and they create a lot of opportunities for me and I like to give them opportunities as well."

Galvan also finished the game with a pair of assists.

Before senior Joshua Mateo’s scoring spree, Adrian Frausto converted on a penalty kick for the Comets in the 54th minute.

"Even the players that were coming off the bench were contributing," West Liberty head coach Walton Ponce said. "That's something we always preach, that we're only as good as our 16th, 17th guy. We were able to move the ball in the attacking third and put it away."

Galvan got the scoring early when he put home a ball that rattled around in front of the goal before Galvan drove it into the net to give the Comets an early 1-0 lead in the fourth minute.

The junior Molina left the game shortly after the Galvan goal after a West Liberty attempt to clear the ball from the Columbus zone struck Molina in the head. He would return 10 minutes later.

The Columbus forward came in having scored 17 goals on the season, which put him right below Galvan on the Class 1A scoring list. But anytime he saw the slightest bit of daylight against the Comets, multiple defenders were on all sides of him within seconds.

"They have a pretty good player in (Molina)," said Ponce. "But overall, we possessed the ball pretty much the entirety of the game and that put some frustration on their end and allowed us to control the game.

"Defensively, despite a couple miscues, we did a very good job as a group containing him."

Galvan is now up to 23 goals on the season.

"We're hoping to make a run this year," said Galvan. "It's awesome to have so many scorers. It gives us an opportunity to make plays at any given time."

Juan Mateo scored twice for West Liberty in the opening 40 minutes. Galvan assisted on the first after he got the ball in a little bit of space and dribbled down the middle of the field before Columbus defenders closed in on him, only to have Galvan feed Mateo for the score.

Mateo’s second came shortly after a Comet inbound on the far side of the field in the 29th minute and was the final score before halftime as West Liberty carried a 3-0 lead into the break.

"It's always a rivalry game against Columbus" Ponce said. "Regardless of records or previous results, they usually come in and give their best. Luckily, our boys turned it on, especially in the second half to complete it."

Defeating a state-ranked rival multiple times in one season can be quite a task, but with a 4-2 victory over Bettendorf Tuesday evening, the M…

Daufeldt secures spot back at sate in long jump, surprises in other events

Macy Daufeldt has been waiting a long time to defend her Class 2A long jump title.

Sometime around third grade, Rylie Moss was given an assignment to write a letter to someone she looked up to.

Even with the 2020 spring golf season canceled due to the COVID-19 pandemic, the Louisa-Muscatine girls golf team didn't quite know what to expect.

McGill's pair of goals guide Muskies to win over Regals

MHS student-athletes playing at next level recognized at signing day

On Friday, Muscatine High School honored the members of its senior class who will be extending their athletic careers beyond high school.

The Class 3A No. 14 Muscatine Muskie girls soccer team scored two victories on Saturday at Muscatine Soccer Complex during a home tournament.

In a battle of top-5 ranked 1A teams, West Liberty pitched a shutout Tuesday, beating Mid-Prairie.

West Liberty's Bryan Martinez-Zavala sends the ball upfield during the first half of Thursday's game against Columbus at West Liberty.

Columbus' Gary Molina works the ball past West Liberty's Joshua Mateo during the first half of Thursday's game at West Liberty.

Columbus' Jose Valencia keeps the ball in play and sends it downfield during the first half of Thursday's game against West Liberty.