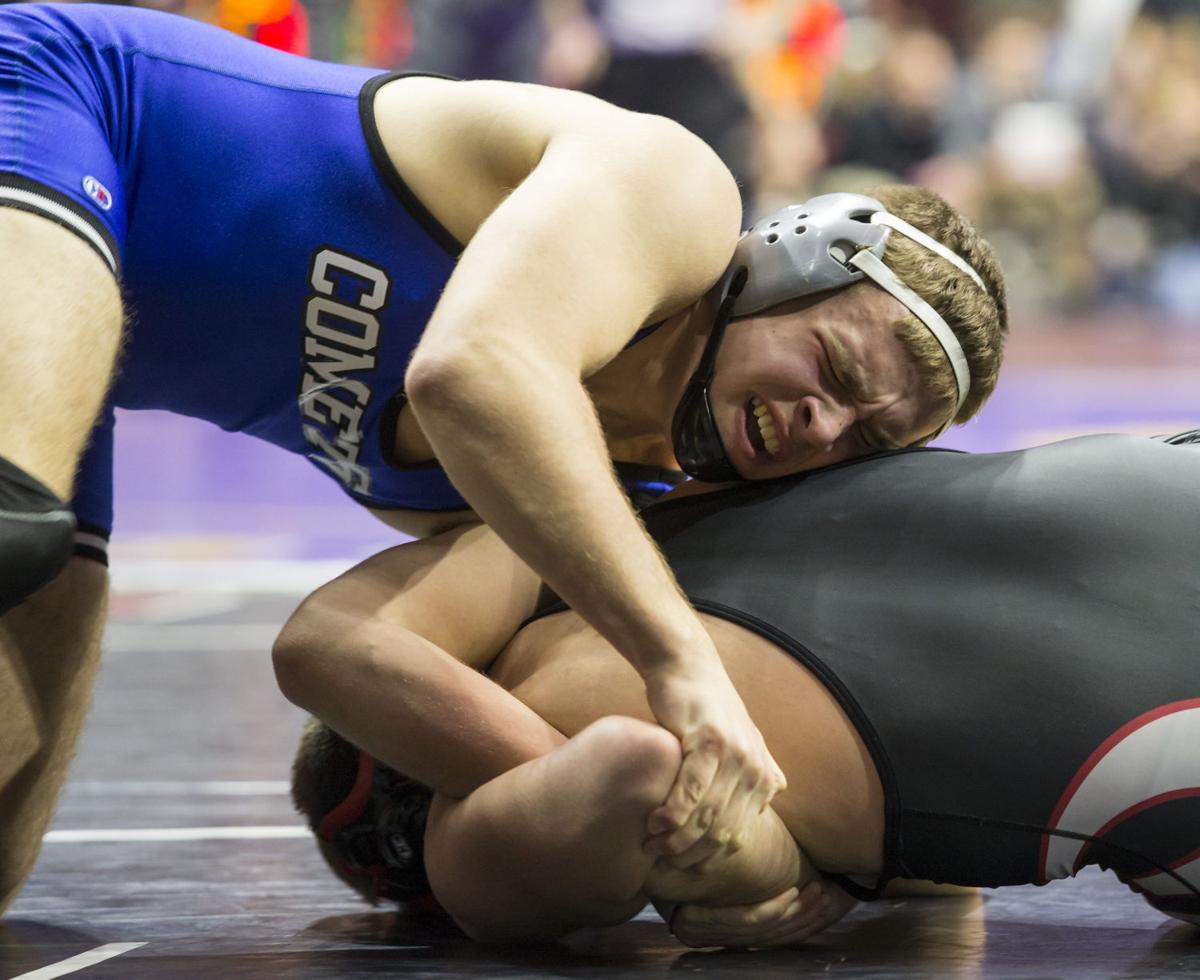 West Liberty's Bryce Esmoil works on freeing the arm of Gilbert's Chris McGuire at the 2A Iowa state wrestling tournament in Des Moines on Thursday. 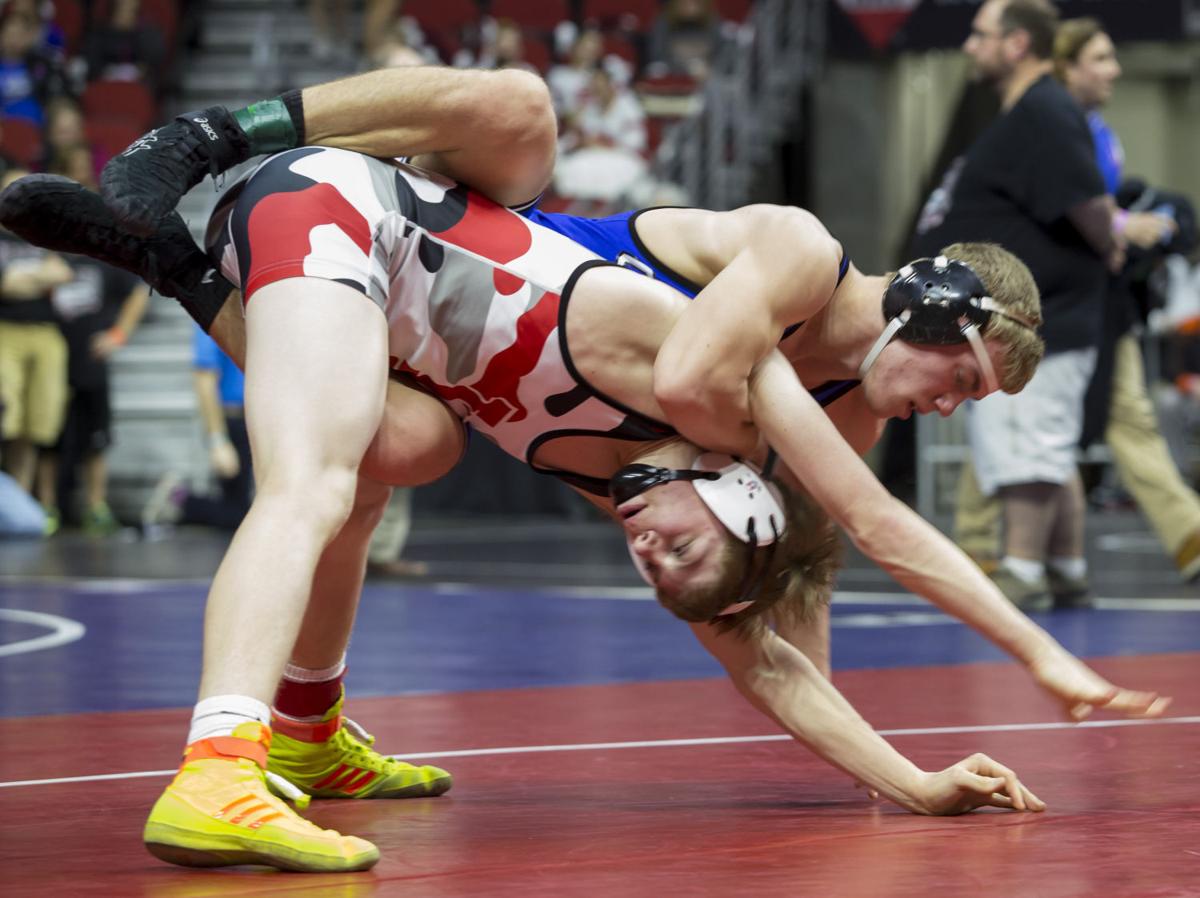 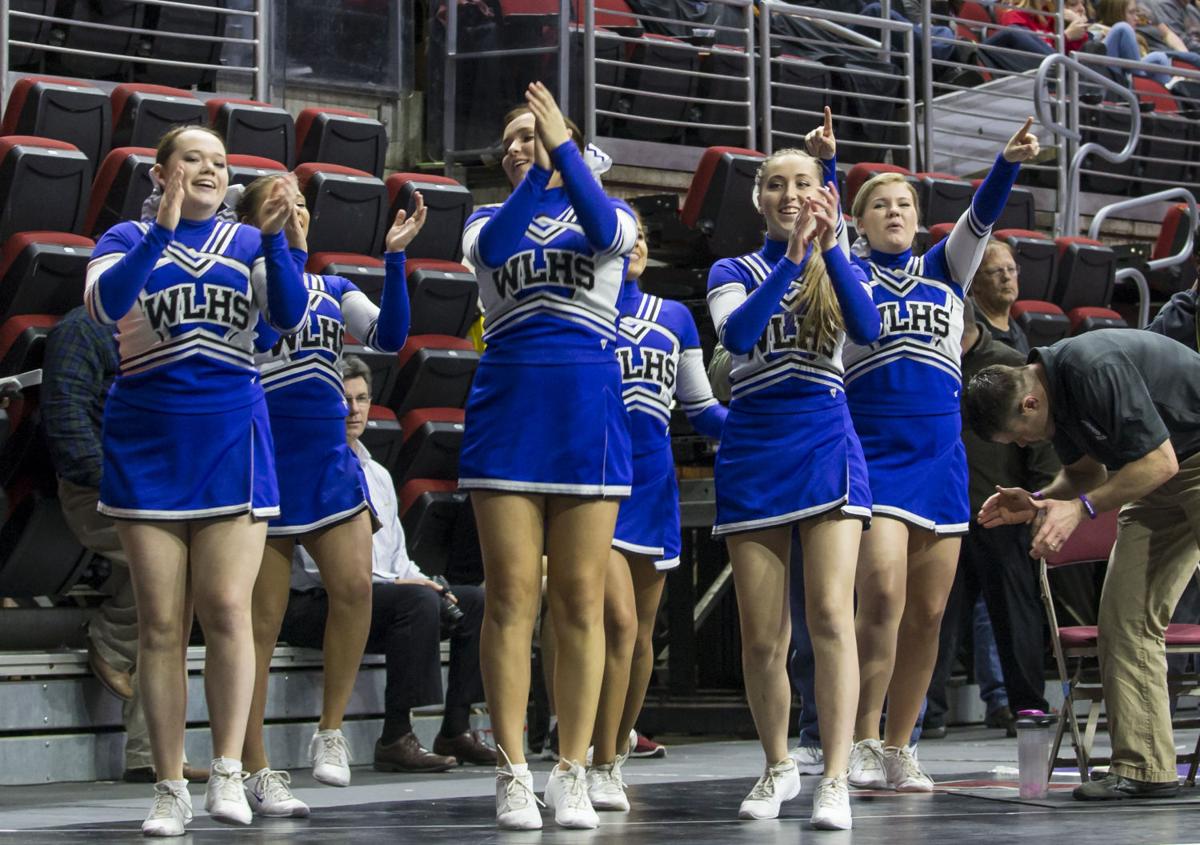 West Liberty cheerleaders celebrate the win of Bryce Esmoil at the 2A Iowa state wrestling tournament Thursday in Des Moines.

DES MOINES — In an opening round filled with close decisions, West Liberty sophomore Bryce Esmoil decided to leave nothing to chance at the Iowa Class 2A state wrestling tournament.

Leaving behind the memory of an opening-round loss a season ago, the Comets’ second-ranked 195-pounder needed only 1 minute, 8 seconds Thursday to move to Friday’s quarterfinals with a 46-0 record after his pin of Gilbert’s Chris McGuire.

“I was a nervous freshman last year. I learn from my mistakes,’’ Esmoil said. “Any match I lose, I learn from, and I learn from every match I win, too. I learned a lot watching here a year ago.’’

Esmoil experienced a totally different feeling Thursday as he walked onto the mat at the Wells Fargo Arena.

“I wasn’t nervous at all this time. I felt confident, ready. I was ready to come out and wrestle from the start,’’ Esmoil said. “The quicker you can get on and off the mat in this type of tournament, the better.’’

Esmoil is one of four area wrestlers that moved on Thursday, with three advancing to Friday's quarterfinals.

West Liberty sophomore Joe Kelly had to work extra time but the two-time state qualifier joined Esmoil in the 2A quarterfinals.

He beat Pocahontas Area senior Connor Schoening 6-4 in overtime at 152 after Schoening got a late reversal to tie the match at four and send it to the extra period, where Kelly quickly got a takedown for the win.

"He wrestled pretty good. Out here, a win's good," West Liberty wrestling coach Jeff Wiele said of Kelly, adding: "That's a big part of it, just getting into it and getting the first match out of [the way]."

"I thought he showed good hand and foot movement," Columbus coach Bill Plein said. "He moved well, but I think his mental preparation, he kind of over-prepared and ran out of gas a little bit."

Morrison gets top-ranked Chase Shiltz of Creston in the quarterfinal, the same wrestler who handed the Columbus junior his only loss this season.

"It's the match he wanted. Like I told him, you have to work on [your] preparation and not worry about anything else," Plein said. "... He's one of the best kids in the state, we're going to have to have our 'A' game."

Josh Keller, Columbus' third-ranked 113-pounder, suffered his second loss of the season in a 113 opener with fifth-ranked Noah Fye. The New Hampton sophomore, who Keller beat in a 106 semifinal last season, pinned the Wildcats senior in 1:14 after catching him and locking up a cradle.

In a consolation first-round match, Keller bounced back to grab a 2-0 victory over ADM's Nolan Harsh and move on.

—The Journal's Andrew Wyder contributed to this story

The largest classification in Iowa high school football is undergoing a makeover for the 2020 season.

DAVENPORT — For the second time this season, Muscatine pushed Davenport North to the limit.

West Liberty's Bryce Esmoil works on freeing the arm of Gilbert's Chris McGuire at the 2A Iowa state wrestling tournament in Des Moines on Thursday.

West Liberty cheerleaders celebrate the win of Bryce Esmoil at the 2A Iowa state wrestling tournament Thursday in Des Moines.