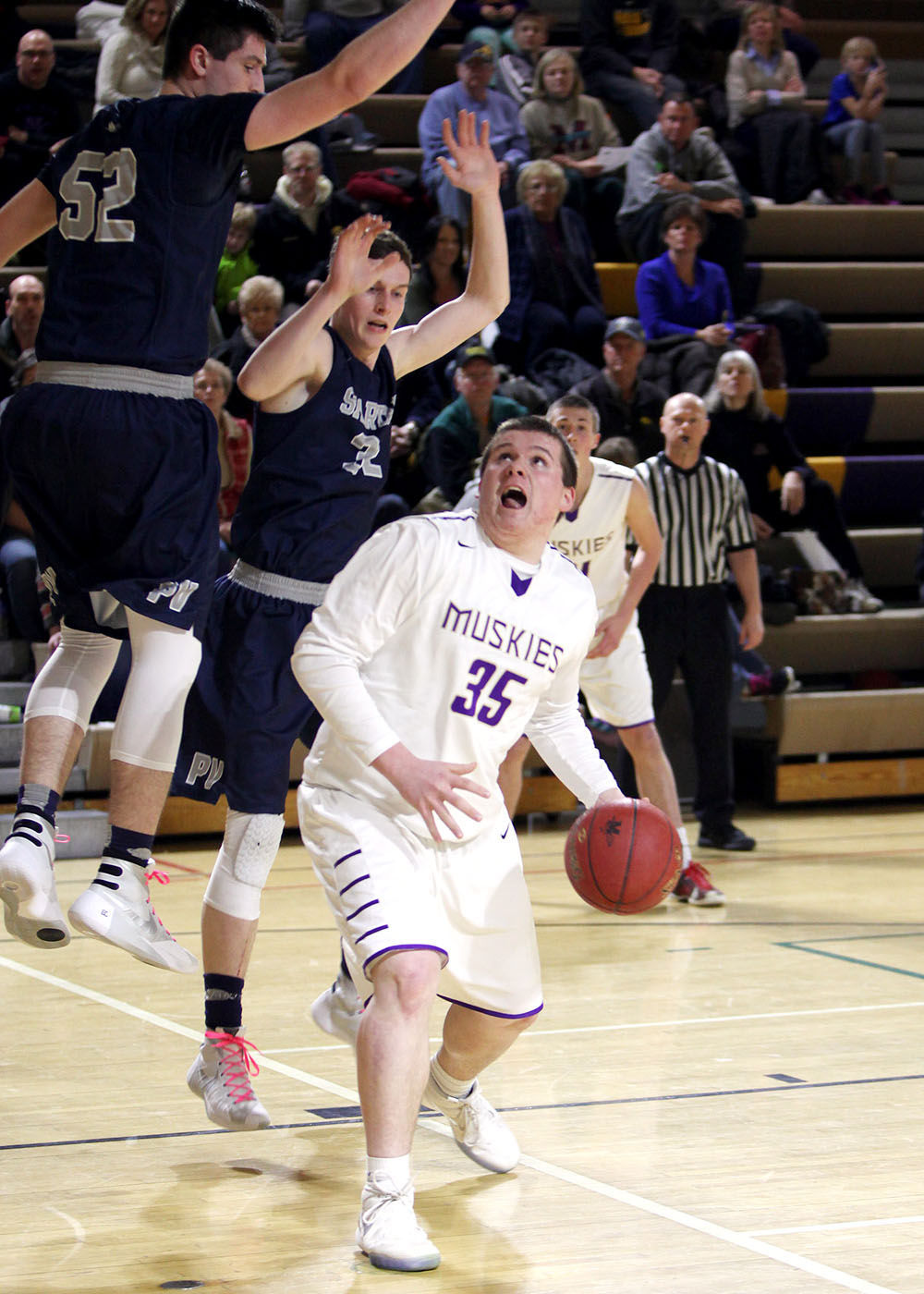 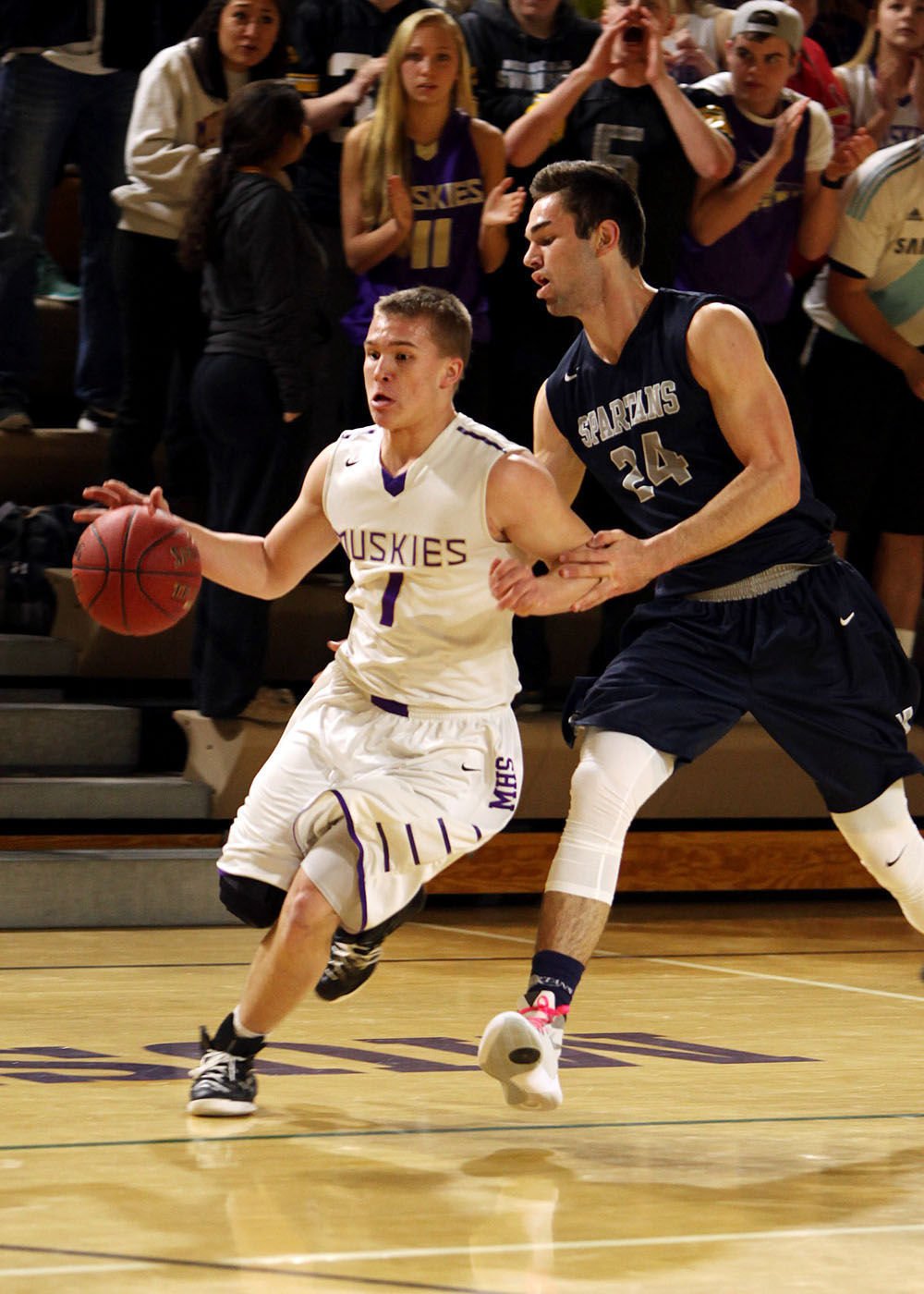 Muscatine's Brandon Kovach works the ball past Pleasant Valley's Will Carius (right) during the first quarter of a boys basketball game at Muscatine High School on Tuesday. 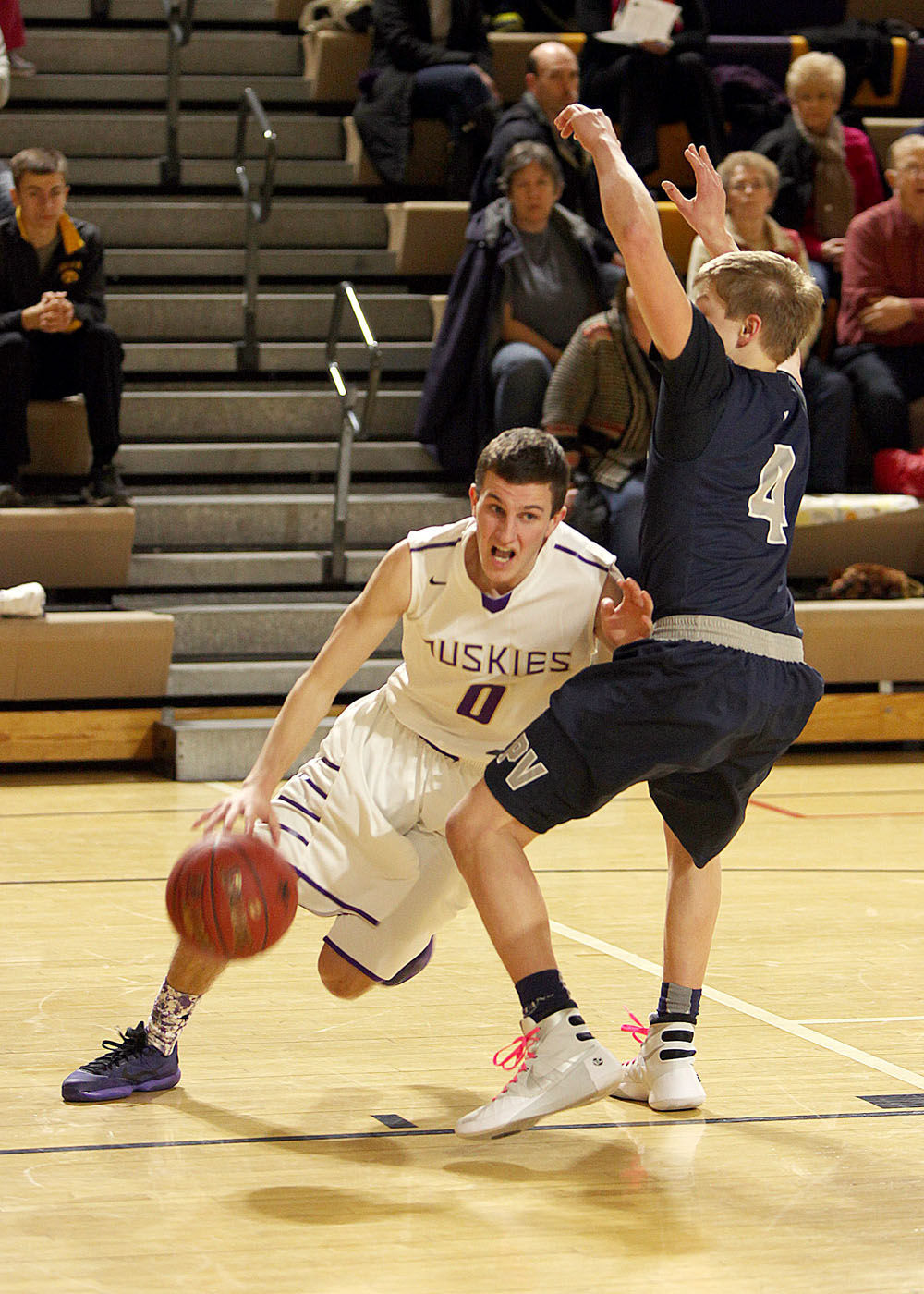 Muscatine's Matt Shellabarger runs the baseline past Pleasant Valley's Alex Kitzmann during the first quarter of a boys basketball game at Muscatine High School on Tuesday. 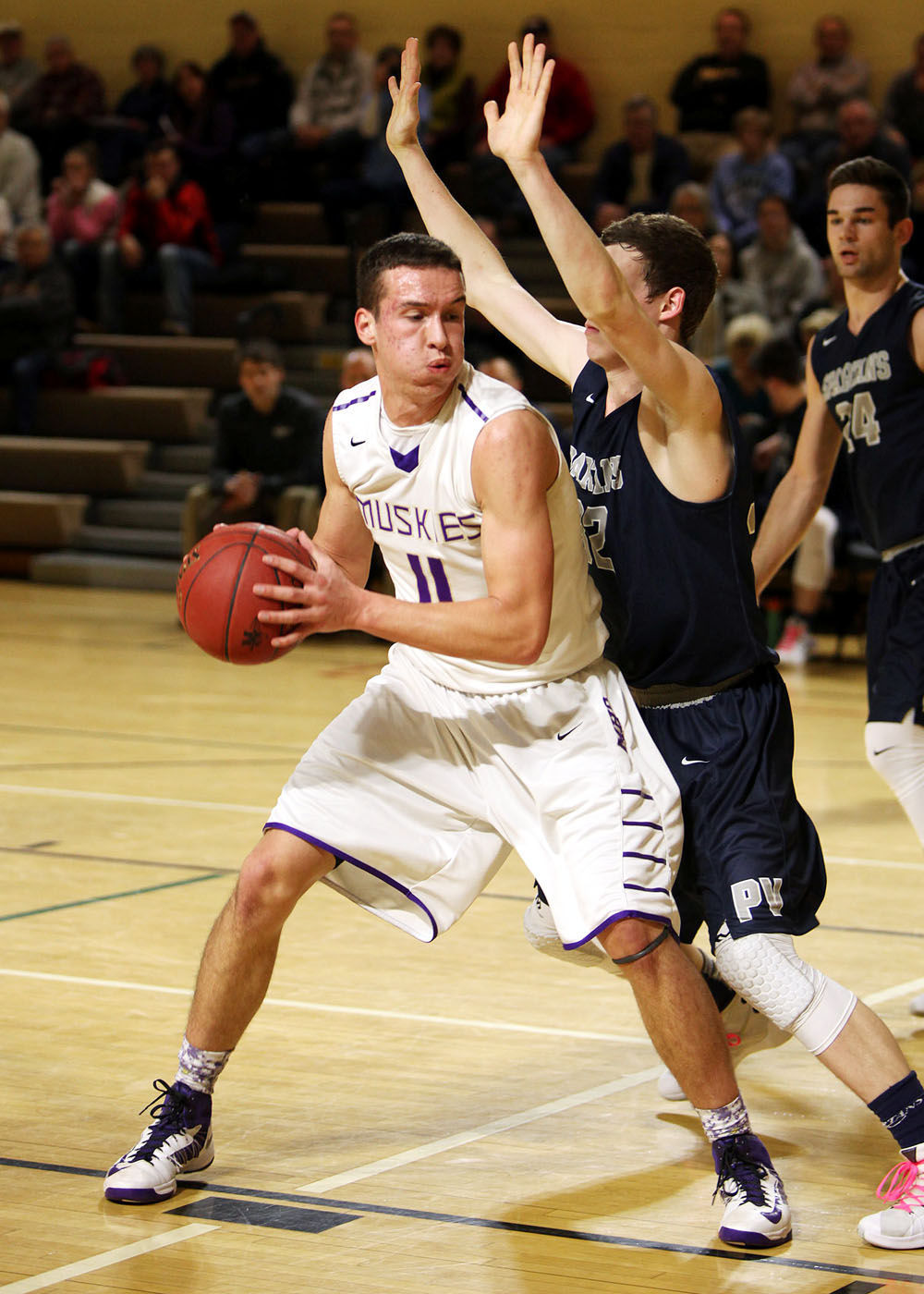 Muscatine's Duncan Snider looks for the shot during the second quarter of a boys basketball game with Pleasant Valley at the Muscatine High School Fieldhouse on Tuesday.

MUSCATINE — Joe Wieskamp might not have felt all that great Tuesday night but whatever bug had him down, it wasn’t enough to slow him down against top-ranked Pleasant Valley.

Wieskamp scored 27 points, including the go-ahead 3-pointer with 22 seconds left in overtime, to lift the Muscatine boys basketball team to a 59-58 victory over the Class 4A No. 1 Spartans at the MHS Fieldhouse.

Pleasant Valley senior Will Carius scored 28 of his game-high 35 points after halftime to help will PV to rally from a deficit as big as 19 points in the first half, but the Muscatine standout sophomore turned his clutch shot over the outstretched hand of John Czarnecki into a game winner by blocking the final PV attempt, a Czarnecki shot in the paint to the left of the basket, as the buzzer sounded and secured a wild victory for Muscatine and the Spartans' first loss of the season.

“He was hurting. I pulled him out a little in the second quarter and he was struggling. I didn’t know if he would be able to go back in the game,” Muscatine boys basketball coach Brandon Welsch said of Wieskamp. “Just a ton of heart to play through that. To keep his composure, I thought he shared the ball when he needed to share the ball and I thought he took it when he needed to take it as well. I’m glad he ended up with it the last play. You can’t hit a bigger shot than that against the No. 1 team late.”

The Muskies (13-5, 9-4 Mississippi Athletic Conference) played a strong first half, holding the Spartans to 22 percent shooting as they built a 29-14 lead. PV (17-1, 12-1) cut into the lead in the third quarter, though, and had the Muscatine lead down to three with 6 minutes, 11 seconds left in regulation after an intentional foul and a Carius 3-pointer contributed to a five-point Spartans possession.

Carius scored 12 points in the fourth quarter, including two free throws with 5.9 seconds left to tie the game at 49 after Muscatine’s Derrick Woepking was called for the team’s second intentional foul on a night where there were a total of just 26 fouls called.

“We tried to take a foul on the floor. We were trying to give one up,” said Welsch, alluding to the fact his team had just five team fouls at the time. “Our guy was a little more aggressive than we would have wanted them to be, but I still didn’t think that was an intentional from my viewpoint.”

Muscatine never wavered, though, despite the two intentional fouls and Welsch being whistled for a technical with 1:27 left in overtime.

“We just kept our heads. We knew coming out of the second half [the Spartans] were going to bring it right away, so we just had to keep our composure and play to our strengths,” said Muscatine senior Matt Shellabarger, who added 14 points.

Even as the Spartans were rallying, though, the Muskies never let PV take a lead in regulation. Wieskamp hit 8 of 9 free throws in the final quarter as he attacked the basket and rebounded against a team that played seven players, four of whom were 6-foot-5 or bigger.

“It was tough going up against those big guys. They’re not only tall, but they’re strong,” said Wieskamp, who grabbed 15 rebounds a day after not being able to practice because of his illness. “You’ve got to match their physicality and go up there and just get every board.”

PV jumped ahead quickly in the extra session, scoring the first four points of overtime. With 1:07 left in the game, the Spartans had built a five-point lead, 58-53.

The game teetering on the edge, Jake Mussehl, who started in place of Wieskamp, drilled a 3-pointer to cut the deficit to two points with 56 seconds left.

“Joe Wieskamp, we had a play with him to screen and roll and [the defenders] both went off him,” Mussehl said. “He [got] a nice pass to me and I just shot it.”

Muscatine’s pressure, trapping defense then came up with what it was looking for with 37.7 seconds left when Duncan Snider came over to trap PV’s DiAnte Fields and forced a turnover, which set up Wieskamp.

With the clock running down, Wieskamp hesitated, stepped back and nailed the shot from distance. PV wasn’t able to call a timeout, and got the ball to the post but Wieskamp's block capped a memorable win the Muskies hope can carry them to a strong finish.

“It feels great to take down the No. 1 team. But it’s just one night,” Wieskamp said. “We’ve still got to finish out. We’ve got to enjoy it tonight and get back to work tomorrow.”

Is Sean Payton an early frontrunner for Coach of the Year?

Muscatine's Brandon Kovach works the ball past Pleasant Valley's Will Carius (right) during the first quarter of a boys basketball game at Muscatine High School on Tuesday.

Muscatine's Matt Shellabarger runs the baseline past Pleasant Valley's Alex Kitzmann during the first quarter of a boys basketball game at Muscatine High School on Tuesday.

Muscatine's Duncan Snider looks for the shot during the second quarter of a boys basketball game with Pleasant Valley at the Muscatine High School Fieldhouse on Tuesday.