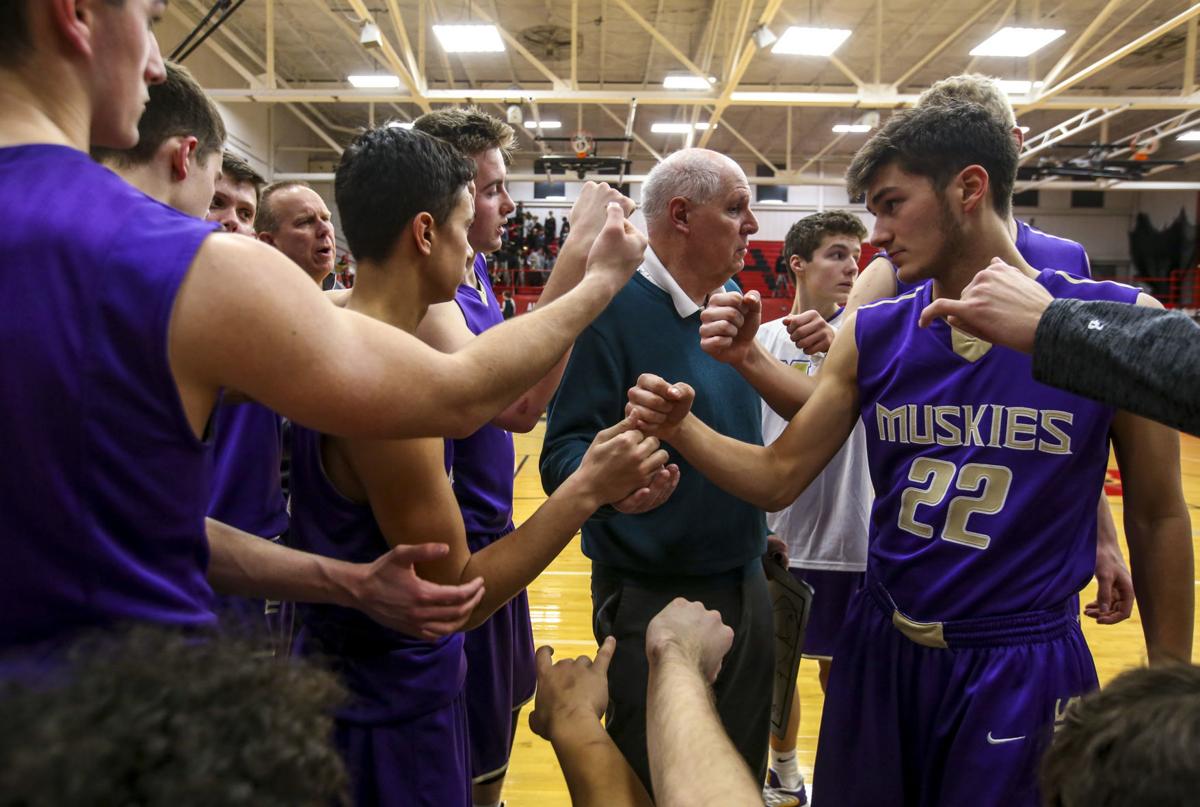 Muscatine head coach John Windham talks with his players before the second half at Assumption High School in Davenport, Tuesday, Feb. 12, 2019. 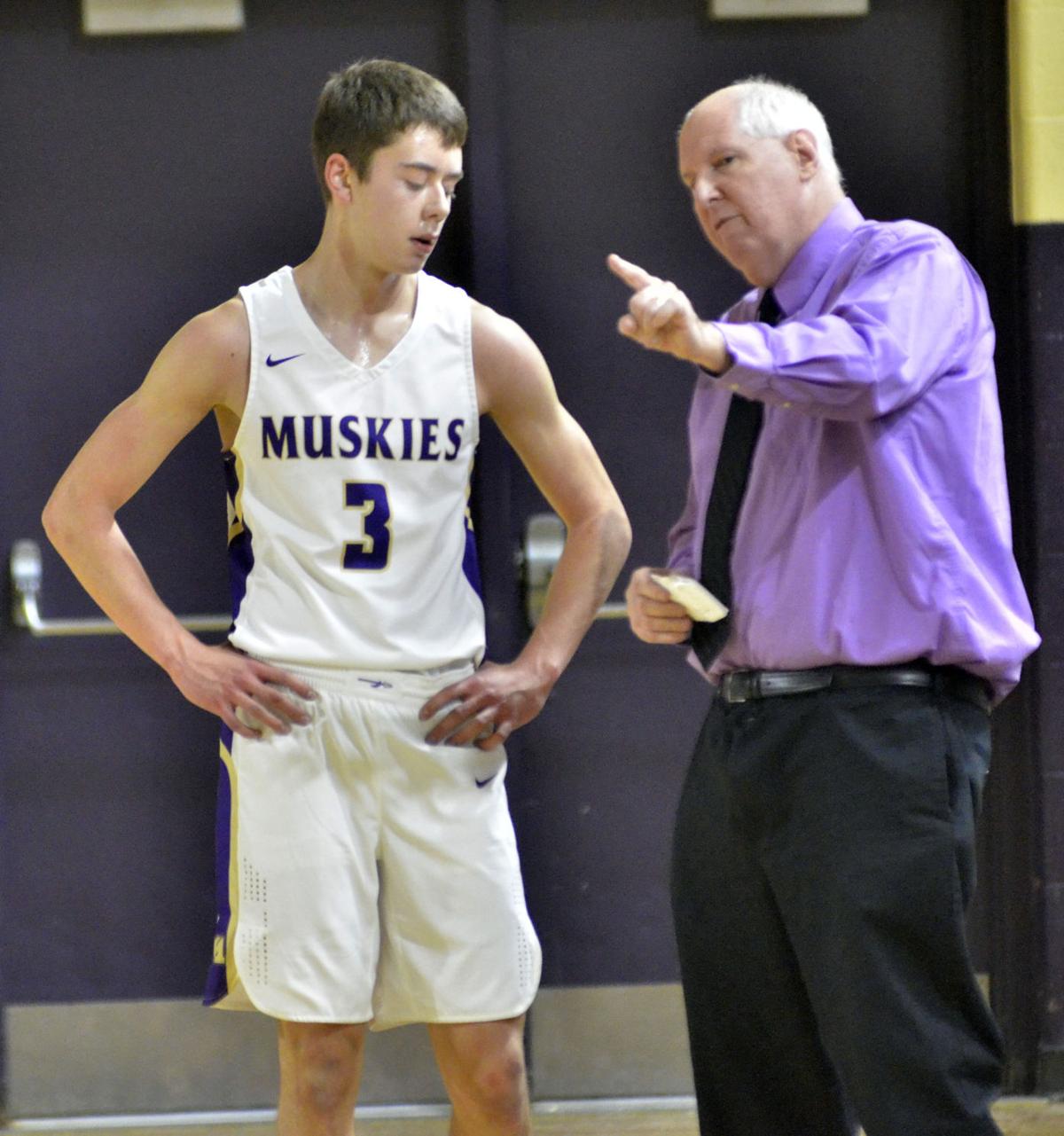 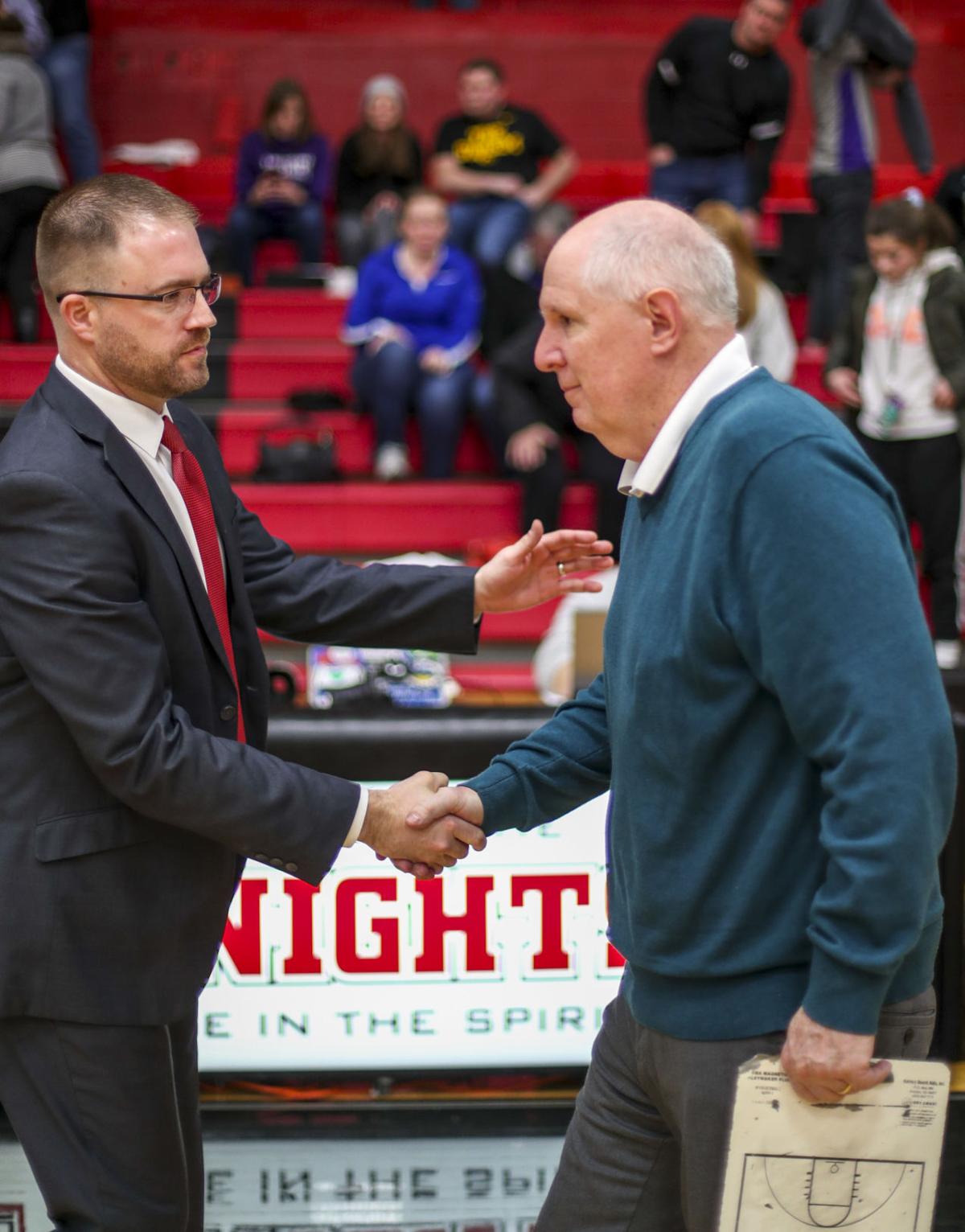 When John Windham took over the Muscatine boys basketball program, he saw it as his job to get things back in order.

Now, feeling like the program is once again lined up for success, Windham decided to step down as Muskies' head coach and concentrate on the health of himself and loved ones.

"At the end of the (basketball season), I knew I had knee replacement surgery coming up," he said. "I'm having that done in two weeks and knew that was going to take all summer to get back into full shape. That was one of the things that played on my mind that I shared with the basketball staff, (school staff), and some varsity players.

"The other thing is, my youngest daughter has been battling cancer, and she has her surgery next week, so I felt like I needed to be closer to (her)."

That will take Windham to the Kansas City area, where he plans to continue a teaching career.

In Windham's first season, the Muskies sought to rebuild after losing most of the roster after the Joe Wieskamp-led Muskies reached the Class 4A state tournament the prior season.

"Three years ago, I sat down with (then Muscatine activities director) Mike Morgan, and talked about a plan to rebuild the program," Windham said. "I'd always enjoyed challenges. I'm very pleased and proud of the kids and program while I was there.

"I realize that first year was a struggle, but ... everyone stayed on board and we got things going in the right direction ... I feel good about where we ended up, considering where we started."

The on-court reps gained that season turned into some success. Muscatine climbed a rung higher in the Mississippi Athletic Conference in each successive season under Windham.

"He always cared a great deal for his players as students, young men and basketball players," Muscatine activities director Tom Ulses said. "Over the last three years, he helped his varsity players develop not only as basketball players but as young men who were ready to go out into the world to make a positive impact.

"Coach Windham also helped foster a greater work ethic in our players to do more of the work necessary to be competitive in the MAC ... We wish (him) all of the best as his move back to Kansas City allows him to spend more time with his family."

The Muskies went 4-18 in 2019-20, but proved to be a pretty tough out in the postseason. Muscatine played with eventual state qualifier Davenport North, though the Wildcats were ultimately victorious, 56-42.

Windham's Muskies got their tournament win the following season, dominating Clinton 85-66 at Muscatine High School before losing to North Scott in the second round.

Under Windham, Muscatine relied heavily on the likes of Noah Yahn and Josh Dieckman.

Yahn was named second team all-MAC as a senior in 2020-21 after twice getting recognized as an honorable mention.

Dieckman was second team all-MAC as a junior and senior, along with Braden Hufford and Reed Ulses, who were each honorable mentions this past winter.

Hufford will be one of Muscatine's top returning players, as he averaged eight points as well as over two steals and assists apeice.

"With Hufford, Sam Emmert and Dante Lee, those three kids had some valuable varsity experience (this past season)," Windham said. "Those three will have success next year."

Muscatine went 10-11 in 2020-21, finishing in seventh place in the MAC after 10th and ninth-place finishes in Windham's first two seasons.

"This last year, considering everything with the pandemic, having the senior class that we had with some juniors, they took it upon themselves to get some gym space in town and got together and worked out together. They were focused," Windham said. "Those guys all did a great job of being teammates."

The boys basketball program also remained busy during the offseason with him as coach, with trips that included a tournament in Kansas City the summer prior to the 2020-21 season that players credited as a catalyst toward establishing a fresh, positive environment around the program.

"That trip was very successful," Windham said. "We played five games, won four of five, even without Noah, who couldn't play because of an injury. That was an eye-opener. After that, the kids really started to believe in themselves."

Windham also helmed the girls golf program this past season as well as taught business at MHS.

"I had a chance to grow the business department, that was something the administration wanted. Classes and student participation increased," Windham said. "I only had girls golf for one year, but I thought I could see growth.

"It kind of started off like the Wizard of Oz, because the day I had my interview was the day the tornado hit Bondurant and Marshalltown, and I thought 'Here we go, starting off with that as a memory of my interview,'" Windham said. "But now it's like Mary Poppins, you know, I came in and did some things that needed to be done, and now it's time for me to open my umbrella and move on."

Why is there still so much doubt surrounding the Atlanta Hawks?

What does Joel Emiid's offseason look like following his knee injury?

What does Joel Emiid's offseason look like following his knee injury?

What are some ways the game of golf can grow?

What are some ways the game of golf can grow?

Syrian boxer competes 'for all refugees' at Olympics

Syrian boxer competes 'for all refugees' at Olympics

The Muscatine softball team beat Durant and Benton Community on Saturday to improve to 11-2 on the season.

Muscatine head coach John Windham talks with his players before the second half at Assumption High School in Davenport, Tuesday, Feb. 12, 2019.