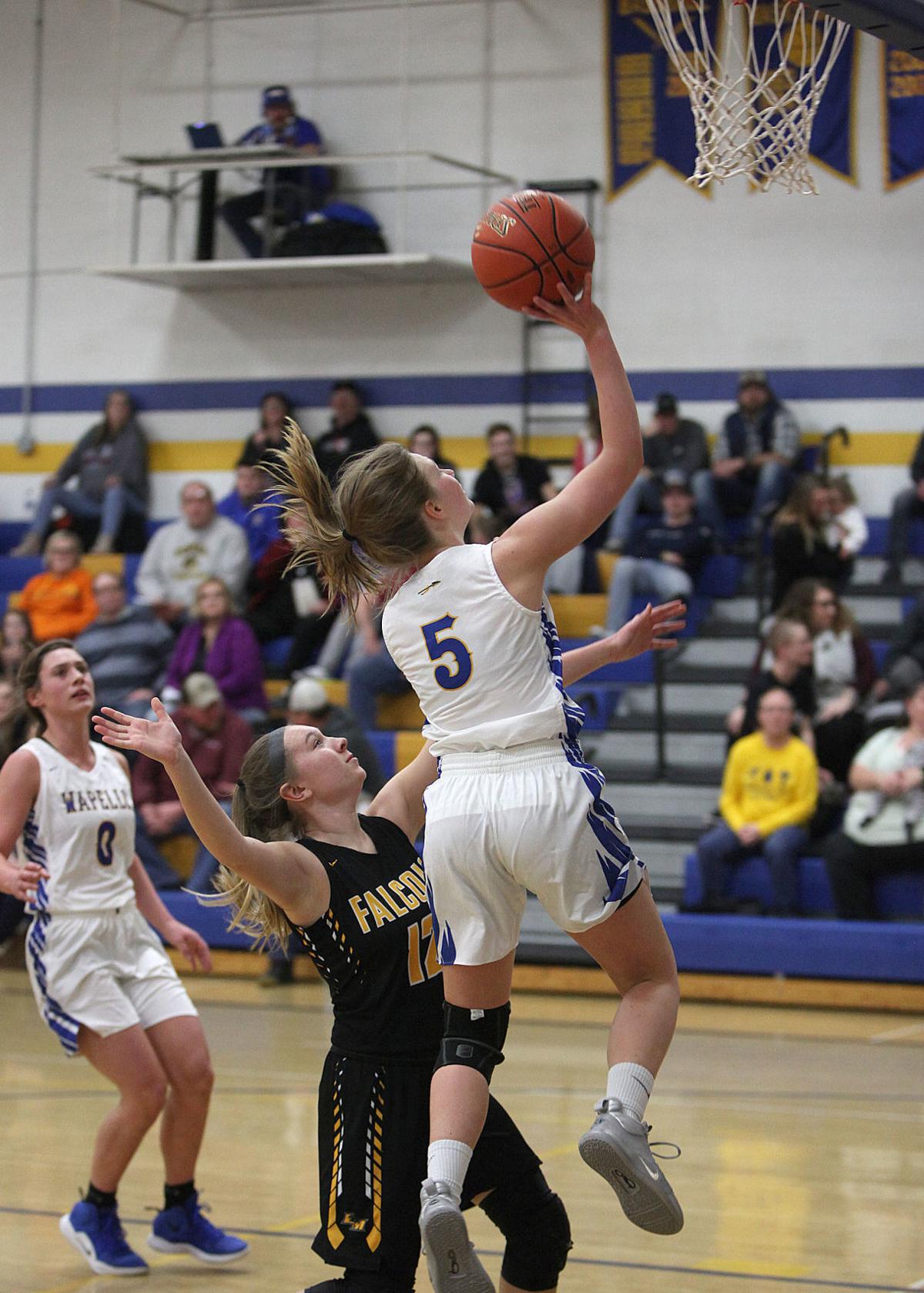 Wapello's Holly Massner drives the lane and scores during the fourth quarter of the Arrows' home win over Louisa-Muscatine earlier this season. 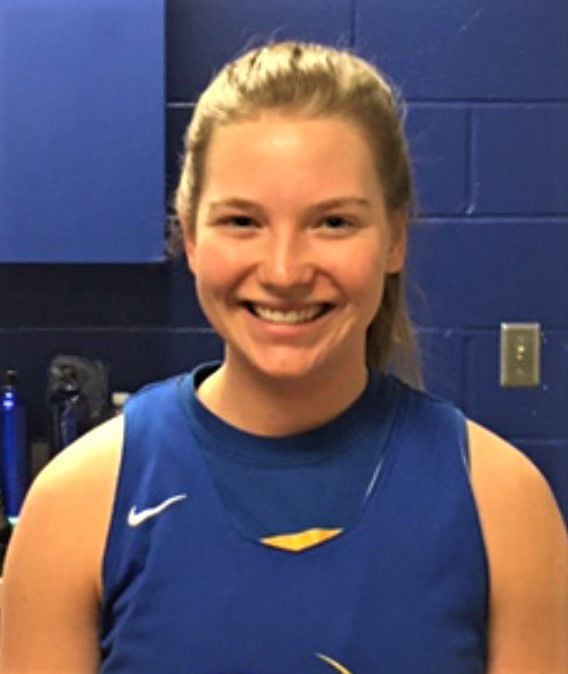 WAPELLO, Iowa — Neither Wapello senior Holly Massner nor Arrows head coach Brandon Brown knew the formula for team success before the season started. But both trusted the team would find a way.

The Arrows own a stellar 14-5 overall record and are 12-3 within Southeast Iowa Super Conference play, good for second place behind Mediapolis (20-1, 17-0 SEISC).

Entering the season, Massner didn’t know what exactly her role on the team would be. But the senior’s competitiveness and team-first attitude organically grew into a versatile, jack-of-all-trades role that’s symbolic of how the undersized team has scrapped their way through the season.

"I think part of it was a struggle," Massner said. "At the beginning of the season, it didn't seem like I had a big role, but as the season went along, the coaches kept telling me I do have an important role. ... I've learned to accept my role and I'm good with it."

“(Our identity as a team) isn't something we planned on," Brown said. "If you asked the girls how much we've worked on defense the last three years, they'll tell you now a whole lot ... but our defense kind of came out of nowhere and (Holly) is a big part of that. She's at the top of our press and zone ... (and) she has unbelievably fast hands and she gets off the floor very quick.

"For her size, she plays bigger. She fits on our team because she's balanced. That's something we have to have (since) our tallest girl is 5-foot-8."

Massner ranks among the top two Arrows in virtually every statistical category. By no coincidence, however, the two areas in which she does lead the team involve getting teammates involved (assists, of which she has 72 in 19 games) and taking the ball away from the opponent (steals, with 83). She ranks third in the SEISC in both categories.

The rest of the Arrow group is led by junior Sammy Ewart and sophomores Serah Shafer and Lindsy Massner, Holly's sister.

“We saw (Holly) had skills as a sophomore,” Brown said, “but we couldn’t get her to utilize those skills, it took a lot of coaxing to get her to understand she could shoot, she could handle the basketball. As a junior, she really started to take on those roles, but she still had a lot of girls around her that could do it, where she could sit back and say ‘You go ahead and do it and I’ll do what I need to do,’ but this year she’s really taken that role and said ‘You know what? I’m gonna do it.’

“Holly pretty much covers about every category in basketball and plays great defense.”

What’s been Wapello’s revelation this season, though, is how naturally roles change within the team on a game-to-game basis. The team’s depth just has a way of picking up the slack wherever needed.

For example, as opposing teams have keyed more and more on Dickey, Massner has scored more. Earlier this month, it was Massner who single-handedly outscored Louisa-Muscatine in the Arrows’ dominant 54-23 win. Massner scored 28, along with six rebounds, three assists and three steals.

But the Arrows' success is driven by their defense, which is allowing a conference low 34.8 points per game.

Of the Arrows’ five losses, three came consecutively in an unforgiving stretch out of the holiday break that pitted Wapello against Burlington-Notre Dame, Mediapolis and Keokuk, all of which were ranked at the time.

But the Arrows have bounced back to go 7-1 since. Rather than send the season into a tailspin, it had a galvanizing effect that speaks to the team’s character.

"It made us come together," said Massner. "We wanted to have a good, winning season, so we were like 'We need to figure out what we need to do moving forward.'"

In an unforeseen plot twist, Wapello has an upcoming home-and-home set against conference foe Pekin (12-6, 11-4 SEISC), who the Arrows lost to in the season opener, 51-35. The first of the two games is the regular-season finale in Wapello, a make-up for the game originally scheduled to be played on Jan. 10. The second game is in Pekin to open Class 1A tournament play.

For Brown, there may be a temptation to hide a few things on Thursday night before postseason play. For the generally soft-spoken Massner, it would be easy to avoid putting specific expectations on the remainder of the season as the team readies for their double-dip against the Panthers. However, for both the Arrows’ head coach and one of his senior leaders, whatever the stakes, their competitiveness will always win out.

“We're in a really weird scenario,” said Brown. “But I don't know how not to compete."

“We want to lay it on Pekin,” Massner said. “We want some revenge for the first game of the season."

DES MOINES — Ever since Will Esmoil walked off the mat with a one-point loss in last year’s championship match, the West Liberty senior has be…

Esmoil goes out a champion

DES MOINES — Will Esmoil has plenty of things to sort out in the next several months. What college to attend? What sport to play? What to study?

DES MOINES — Kael Brisker and Coy Baker felt the agony of defeat in the first round of the Class 1A state wrestling tournament last season.

WATERLOO, Iowa — The Louisa-Muscatine girls bowling team is in a class of its own.

WEST BRANCH, Iowa — For much of the season, the Wapello Arrows found ways to make up for their shortcomings.

With each shot he takes, Trenton Massner feels more at home on the basketball court at Northwestern State.

DES MOINES — Togeh Deseh came to the United States at age 2. Nearly 16 years after arriving here as a Liberian refugee, the Muscatine junior i…

DAVENPORT, Iowa — Just like many other occasions this season, the Muscatine boys basketball team hung around for a half against an upper-tier …

Comets hang on for trip to regional final

WEST LIBERTY, Iowa — The West Liberty’s girls basketball team may have gotten a little more competition than anticipated during Wednesday nigh…

Muscatine had seen — and beaten — Pleasant Valley's defense twice in the regular season.

Wapello's Holly Massner drives the lane and scores during the fourth quarter of the Arrows' home win over Louisa-Muscatine earlier this season.