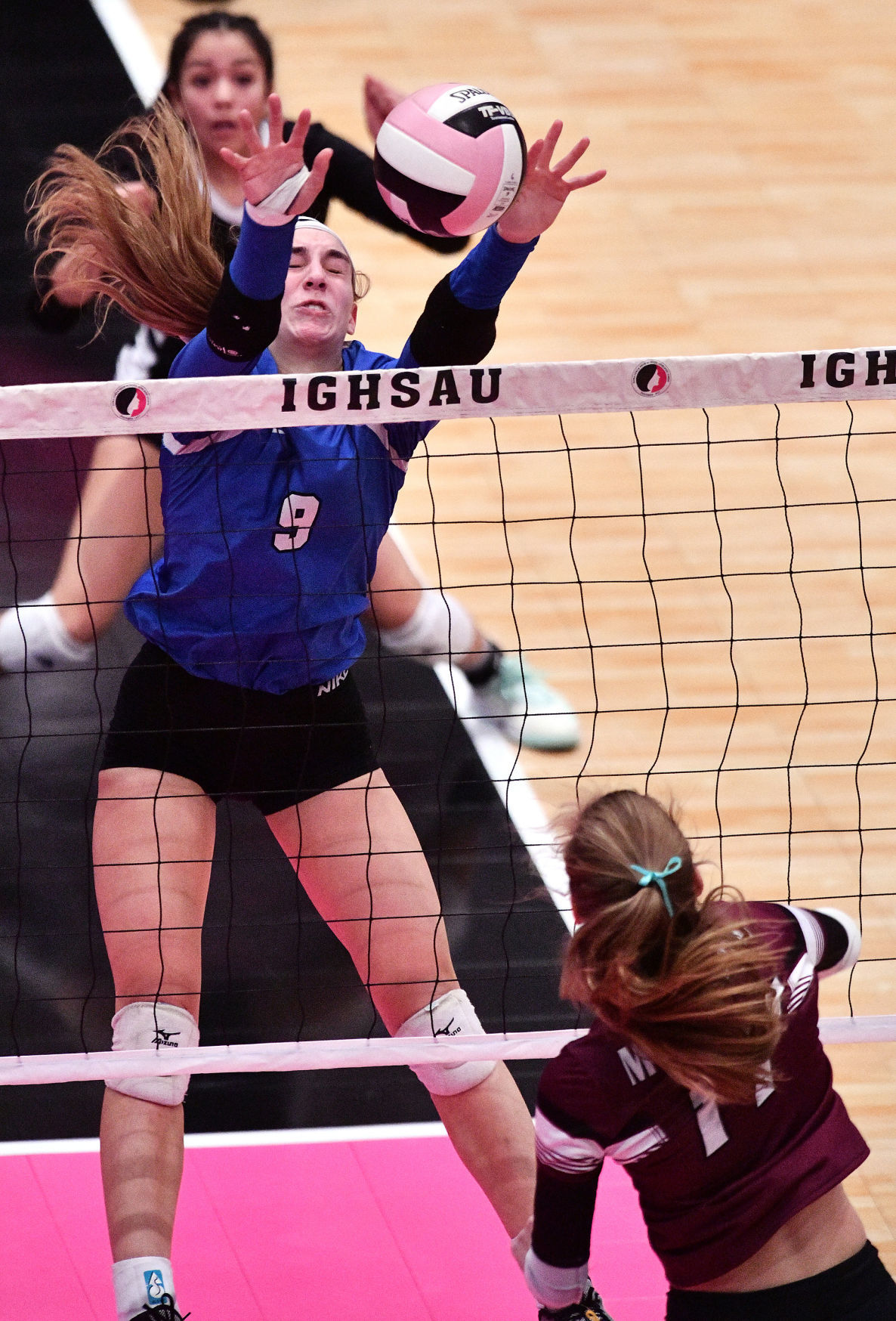 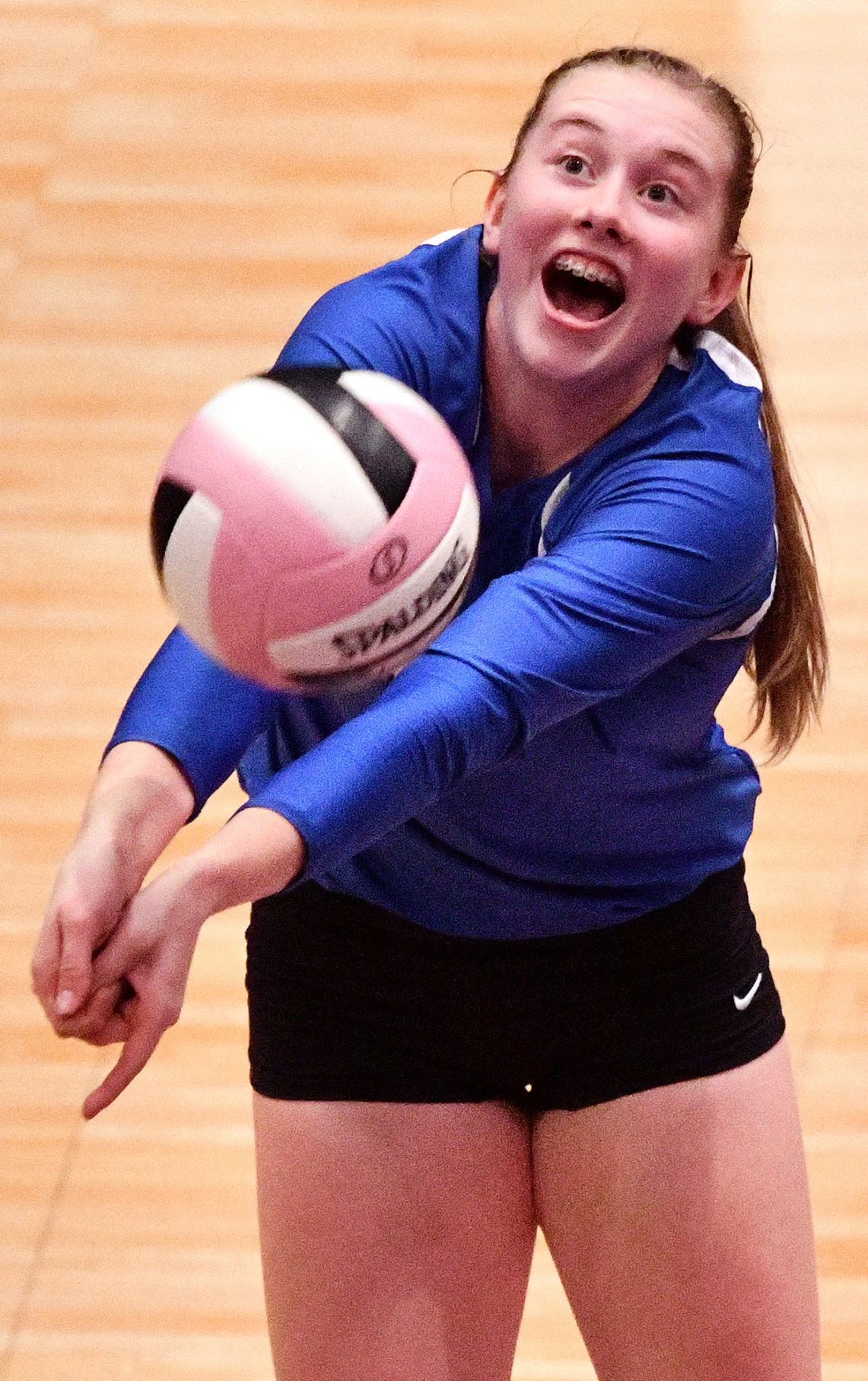 West Liberty's Martha Pace bumps the ball during Wednesday's Class 3A state quarterfinal match against Mount Vernon. Pace had 14 kills and nine digs for the Comets in a five-set defeat.

CEDAR RAPIDS — It took a little time for the West Liberty volleyball team to get up to speed, but once they did, they turned it quite a performance in Cedar Rapids at the Class 3A state quarterfinals.

It was not, however, enough.

After three sets, West Liberty held a 2-1 lead, but they couldn't seal it in either the fourth or fifth set. The match's closest set — the fourth — saw the score tied 13 different times.

It wasn’t pretty for West Liberty (31-8) early on. Whether it was the state tournament stage, the Mount Vernon serves that kept the Comets on their heels or even watching top-seed Davenport Assumption get upset immediately before taking the court that had West Liberty out of rhythm, the team did not look like the same one that ran through the postseason up until Wednesday.

“The first game, we shanked (a lot) of passes,” said West Liberty head coach Ruben Galvan. “I think they were a little nervous, but when you prepare yourself to play on the big stage, you have to perform.”

Mount Vernon (34-10) raced out to a 5-0 lead out of the gate. Two of those came on ace serves from Summer Brand, who had four aces in the first set and finished with a match-high nine. Brand also led all players with 60 assists in the contest.

During that early stoppage, West Liberty head coach Ruben Galvan took a big-picture approach, concentrating more on getting his team to settle down for the long-haul rather than focusing on a first set comeback.

“I told them we might not win the first game,” Galvan said. “But just switching the momentum a little bit … we did that better toward the end.”

“The first set obviously didn’t go too good,” said West Liberty’s Martha Pace, who finished with 14 kills and three aces. “I think it was a little bit of nerves that got to us, but after we calmed down, we regrouped. … The energy from the crowd really helped us get through that.”

Indeed, that approach struck a chord with the team as they began to settle down.

In the second set, the Comets built on the aggression they found to close out the first.

Down 16-14, Mount Vernon took a timeout in an effort to derail West Liberty’s momentum. But it did not work, at least in the short term, with one of Karsyn Ruess’ four aces made it 18-14 in favor of the Comets.

Not to be denied, the Mustangs charged back to cut West Liberty’s lead to 21-19, forcing the Comets to burn a timeout. However, the Comets rebounded to close out the set on a Macy Daufeldt kill, one of her team-high 25.

West Liberty then put up their highest single-set kill total of the match in the third set with 14 as a team, which they rode to a set win to take a 2-1 advantage into the fourth.

The extremely tight Set 4 ended in favor of the Mustangs after Lauren Schrock put down the set-ending kill. Schrock led Mount Vernon with 29 kills in total.

Daufeldt found some space for a tap to land in the fifth set to bring the Comets within a point at 9-8, but a Schrock kill, a West Liberty net violation and a Mustang ace increased the Comets' deficit to 12-8, and they lost the race to 15.

“In the fifth set, we all tried to come back," Daufeldt said. "We just couldn’t find it."

West Liberty's Martha Pace bumps the ball during Wednesday's Class 3A state quarterfinal match against Mount Vernon. Pace had 14 kills and nine digs for the Comets in a five-set defeat.