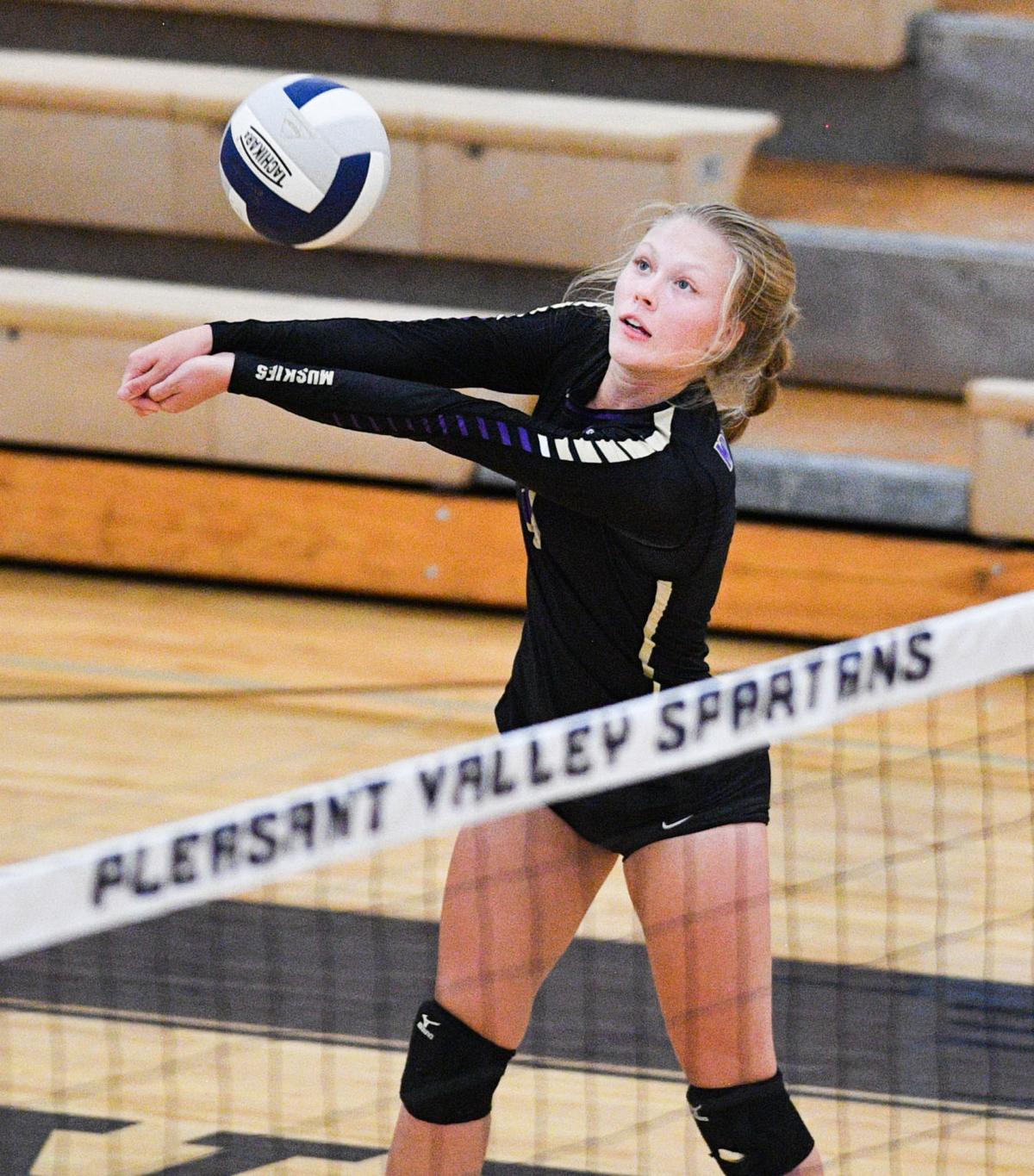 Olivia Harmon (4) has emerged as a team leader in her senior season with the Muscatine volleyball team. 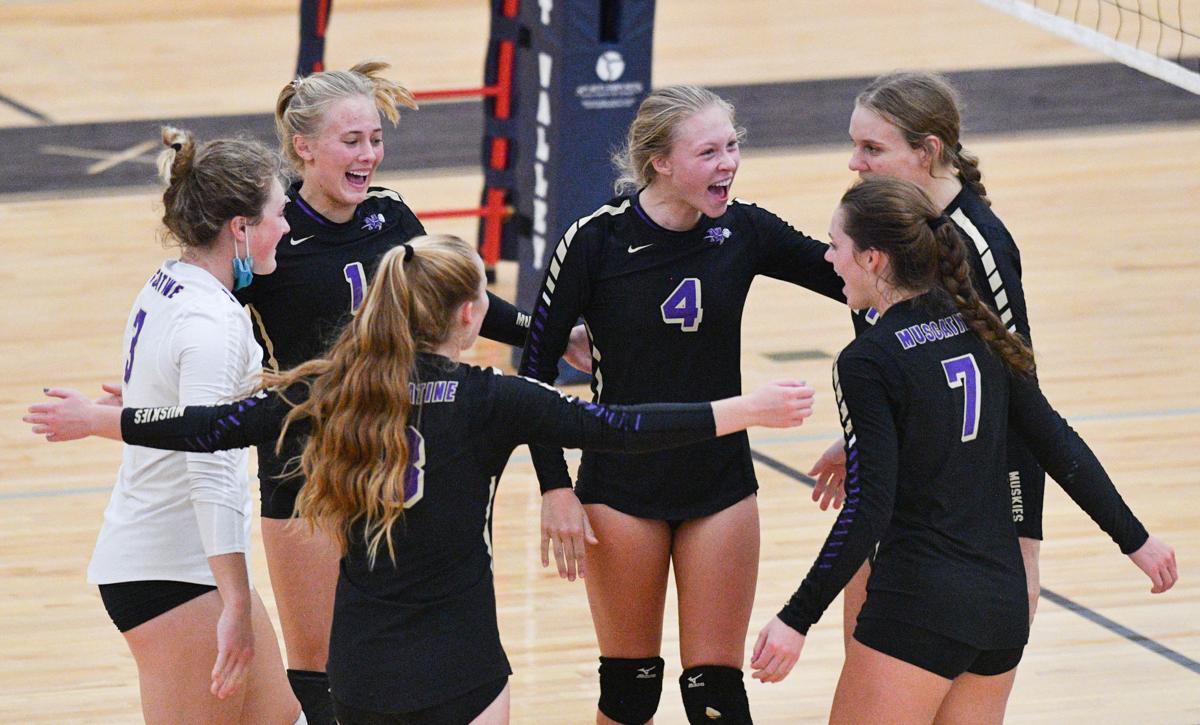 Muscatine's Olivia Harmon (4) celebrates with teammates after scoring a point against Pleasant Valley in a Sept. 8 match.

Harmon didn’t come into the 2020 season taking anything for granted.

In fact, the senior saw an opportunity as the Muskies implemented a new system under first-year head coach Kara Russell following a six-win season in 2019 in which Harmon played in just 28 of a possible 70 sets.

Harmon did a little of everything as a junior, but never found much of a niche, going for 33 digs, 25 kills on .237 efficiency, two assists, three blocks and two aces.

Some of that was just a matter of Harmon waiting her turn as she was roadblocked on the roster by a group of been-there, done-that upperclassmen.

"I didn't get a lot of playing time last year," said Harmon. "There's been a lot of mental preparation, it took (mental toughness) to keep in mind the encouragement from my coaches and my team, just keeping that in the back of my head and always working hard to prove myself and my spot on the team."

This year, Harmon is one of just four Muskies who have played in all 69 sets Muscatine has played, the others being senior setter Kaylynn Salyars, senior hitter Madi Petersen and junior hitter Meadow Freers.

As for finding a niche?

And the increased volume has not come at the expense of efficiency. Harmon’s .174 kill efficiency mark is second-best among players on the squad with more than 50 attempts. Salyars, whose sneak-attacks from the setter position often lead to Muskie points, leads that category at .200 on 140 attempts.

"I'm proud of the team and my teammates for adjusting to the new coaching, new lineups and the whole situation," Harmon said. "We didn't know what to expect coming into the season, but I think we all work together really well. We have good chemistry. That's helped us out a lot.

"I'm a little surprised by myself (to be leading the team in kills)."

While past production didn’t guarantee anything, Harmon’s teammates and coaches had little doubt through it all that the senior would come through when they needed her to.

"I think Olivia is a huge piece (for us)," Russell said. "She's a hitter that we can count on to get us the ball back when we need it."

For Harmon, it was just a matter of getting an opportunity and stacking successes on top of one another. And the senior has only gained self-assurance since earning all-state softball honors over the summer as Muscatine advanced to the 5A state semifinals for the first time in 19 years.

"I think our confidence definitely carried over, because we saw the success that we got from working in the offseason and practicing hard,'' Harmon said. "We definitely came into this volleyball season thinking it would carry over."

At the next level, Harmon will play softball at Iowa Central Community College in Fort Dodge.

"After two years there, my plan is to transfer to (Northern Iowa)," said Harmon. "I don't know about softball for UNI yet.''

Harmon flew under the radar a bit as the Muskies started the season. She recorded just two kills in each of Muscatine’s first two three-set tournament matches. Then, as conference play opened, she made her presence known with seven kills against Central DeWitt before leading the team with 10 against Davenport West as the Muskies opened up the campaign 2-0 in Mississippi Athletic Conference play.

Muscatine more than doubled its win total this season, going 13-12 overall and 5-4 in the MAC.

It finished in a three-way tie for fourth with Bettendorf and Clinton in a tough conference and managed to dip a toe into the Class 5A state rankings a few weeks ago, coming in at No. 14 before bowing out of this week’s version, the final of the season.

Russell said she'll be looking for Harmon to continue to provide the same sort of leadership in the postseason.

"Her personality and her way of leading the team is something we need," Russell said. "I feel like everyone has a different way of leading, but she brings a positive mindset."

Although still just a sophomore, Nolan DeLong has been ahead of the game for quite some time.

Ella Caffery is a problem solver.

Quarterback sneaks, quarterback carries and the return of an offensive lineman are all part of today’s Hawkeye 10@10.

Daviyon Nixon develops a fan club, Tyler Linderbaum looks into his future and Brandon Smith’s blocks are all part of today’s Hawkeye 10@10.

Olivia Harmon (4) has emerged as a team leader in her senior season with the Muscatine volleyball team.

Muscatine's Olivia Harmon (4) celebrates with teammates after scoring a point against Pleasant Valley in a Sept. 8 match.