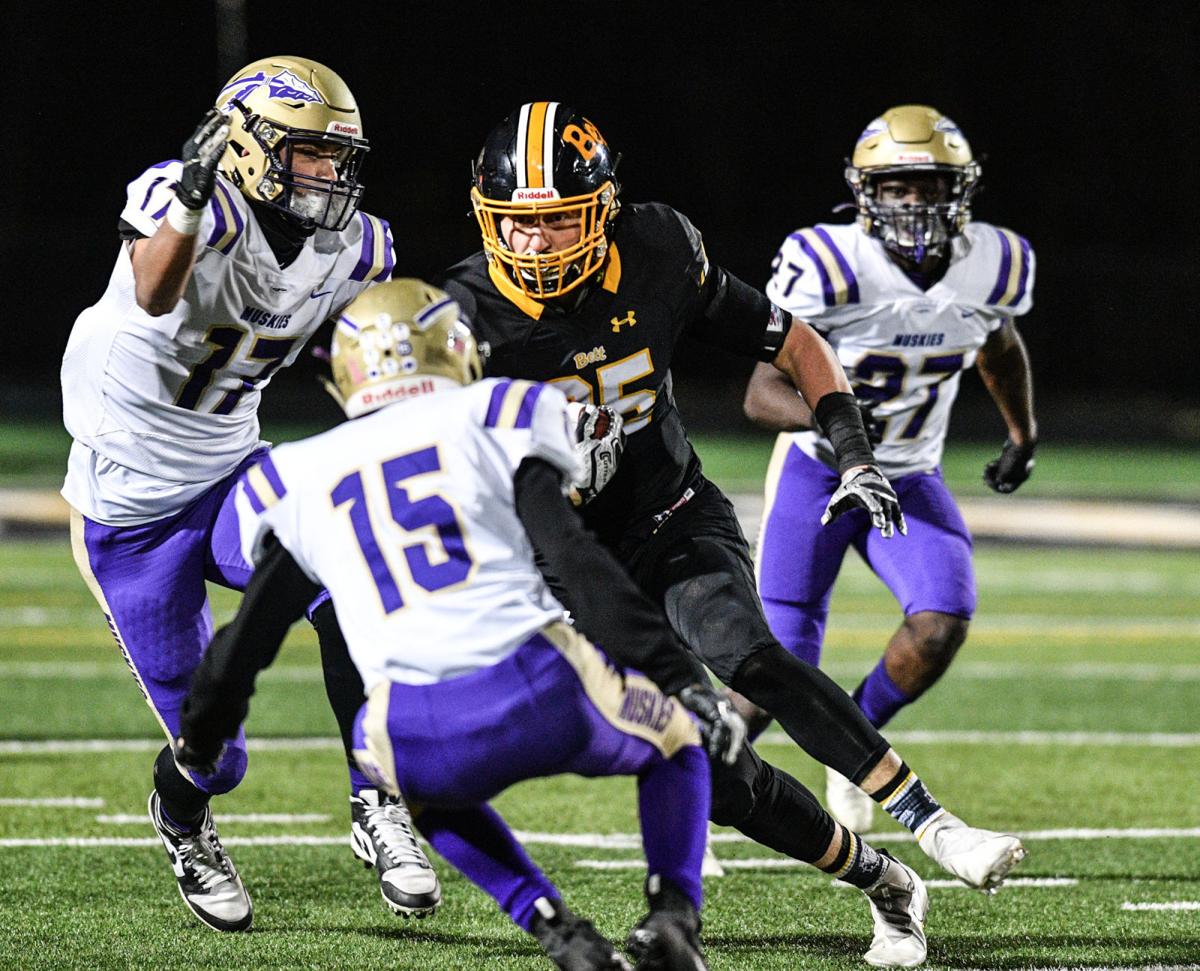 Bettendorf's Oliver Bakeris eludes Muscatine's David Dalbey (15) during the second round of the Class 4A playoffs Friday in Bettendorf. 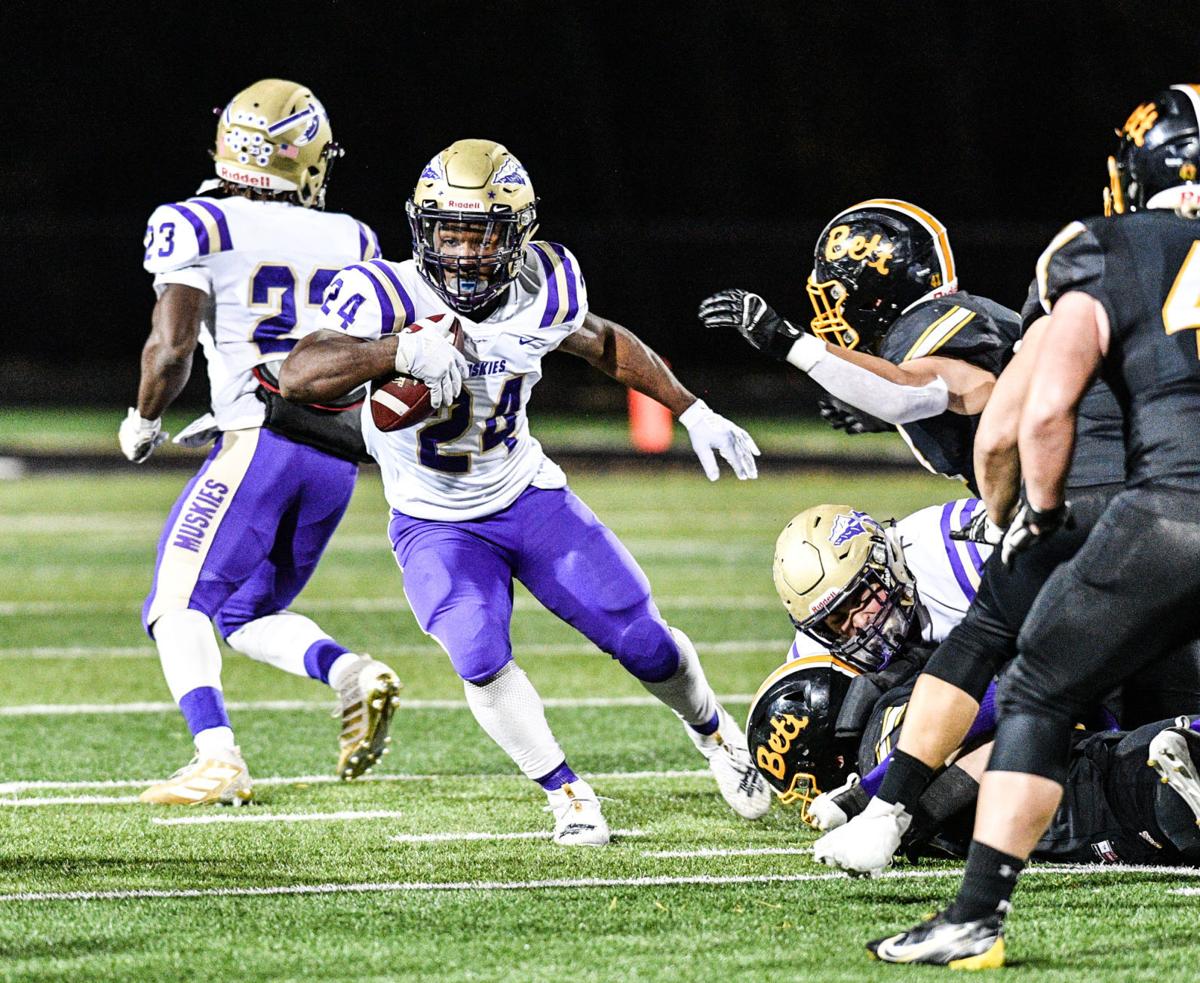 Muscatine's Timothy Nimley (24) runs against Bettendorf during the second round of the Class 4A playoffs Friday in Bettendorf.

BETTENDORF — Friday night’s Class 4A second round playoff game between Muscatine and Bettendorf ended up eerily similar to the first time the teams played in the regular season earlier this month. That was a bad omen for the Muskies.

Like the first game, Muscatine forced an early Bulldog turnover. But unlike the first time, that turnover did not render points on the scoreboard for MHS.

The Bulldogs again owned the third quarter, and like that first matchup, scored 14 points coming out of halftime after taking a 7-0 lead into the locker room. Bettendorf added a late touchdown to really put things out of reach, and would go on to defeat Muscatine 28-0 at Bettendorf’s TouVelle Stadium.

“So many times I said ‘This feels like the first game,’” said Muscatine head coach D.J Hawkins. “(Bettendorf) is a heck of a team, that’s one of the best defenses we’ve played all year. They get after you. And they have weapons on offense.

A recurring theme throughout the night was that when Muscatine would start to gain momentum, it would prove short-lived and be followed by a Muskie miscue.

Conversely, when it seemed as if MHS had avoided disaster when Bettendorf missed an opportunity, the Bulldogs would find a way to follow it up with something that would make up for the miss and more.

The Muskie offense struggled to consistently move the ball, totaling just 35 total yards at the half. And given that MHS is as run-heavy as a team can be, even the second-half runs that went for good chunks of yards were something Bettendorf could live with as the clock kept moving.

Senior quarterback Eli Gaye finished with 60 yards on the ground to lead the Muskie offense. Senior running back Tim Nimely had 15 carries but was held to under 40 yards rushing.

Gaye’s first run of the night went for 13 yards, but MHS only got four more carries that went for over 10 yards the rest of the night.

Bettendorf senior running back Ryan Cole, who had three touchdowns in the first game, fumbled on Bettendorf’s first play from scrimmage and the Muskies recovered.

That came after a high snap on a punt forced MHS senior punter Zander Morgan to his knee, marking him down at the MHS 28.

But Muscatine’s first penalty of the night helped stall the ensuing drive, and a three-and-out set the Bulldogs up for a two-play, 66-yard drive that was capped off by a 55-yard scoring pass from senior Zach Garton to senior tight end Austin Barta to put Bettendorf up 7-0.

Cole was redeemed after that early fumble, however, as he owned the second half. The Bulldog senior had 38 yards rushing on four carries at halftime, but he ended up topping 100 yards on the ground and adding a touchdown.

For the Bulldogs, Garton also had one of his best throwing games of the season. He came in with 491 passing yards on 86 attempts, but threw for over 200 yards against the Muskies, going 9-of-21.

Muscatine would force another turnover in with under five minutes left in the third when senior Jorge Ocampo picked off a Garton pass in the end zone. But the Muskies couldn't do much with either takeaway.

Garton threw for three scores, two to junior Tynan Numkena that went for 24 and 39 yards. The first to Numkena came with less than 10 seconds remaining in the third, and the second coming with 4:45 remaining in the game.

“We made too many mistakes tonight,” said Hawkins. “It didn’t go how we wanted it to.”

Bettendorf (5-2) advanced to play next Friday. As for the Muskies (3-5), it marks the end of several highly accomplished careers at MHS, including Gaye and Nimely, both of whom saw their names selected to all-state teams while with the Muskies.

Nimely finishes his career as the school's all-time leading rusher with a total of 2,759 over his four-year varsity career.

“I’ve been here for four year, been with a lot of great leaders, a lot of ups and downs,” Nimely said. “Some may say we failed, but we left better people, and that’s all that matters. It’s a great group of guys here."

Although still just a sophomore, Nolan DeLong has been ahead of the game for quite some time.

Ella Caffery is a problem solver.

Daviyon Nixon develops a fan club, Tyler Linderbaum looks into his future and Brandon Smith’s blocks are all part of today’s Hawkeye 10@10.

Maradona captivated fans over a two-decade career with a bewitching style of play that was all his own.

Bettendorf's Oliver Bakeris eludes Muscatine's David Dalbey (15) during the second round of the Class 4A playoffs Friday in Bettendorf.

Muscatine's Timothy Nimley (24) runs against Bettendorf during the second round of the Class 4A playoffs Friday in Bettendorf.