Muskies can't hang on in opener, fall to Sabers
0 comments
Share this
1 of 5 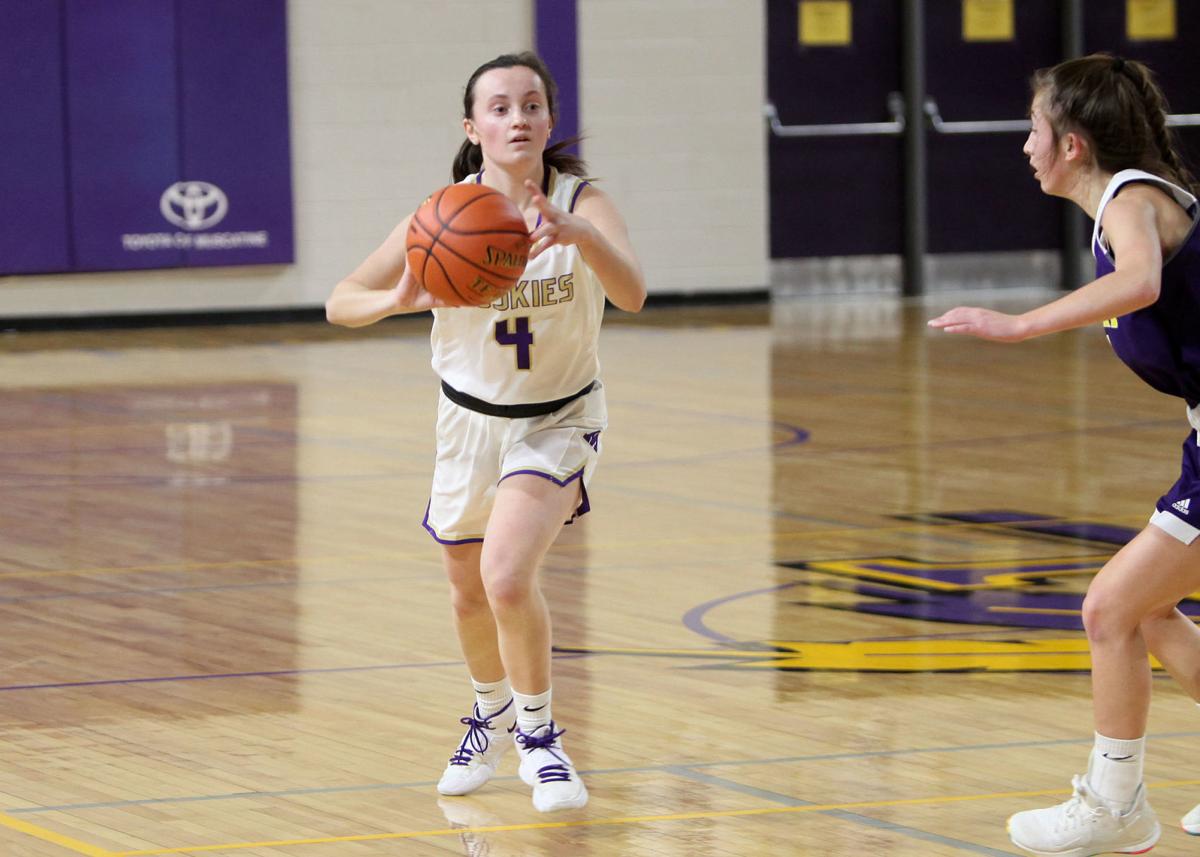 Muscatine's Zoey Long makes a quick pass during the second quarter of Friday's game against Central DeWitt at Muscatine. 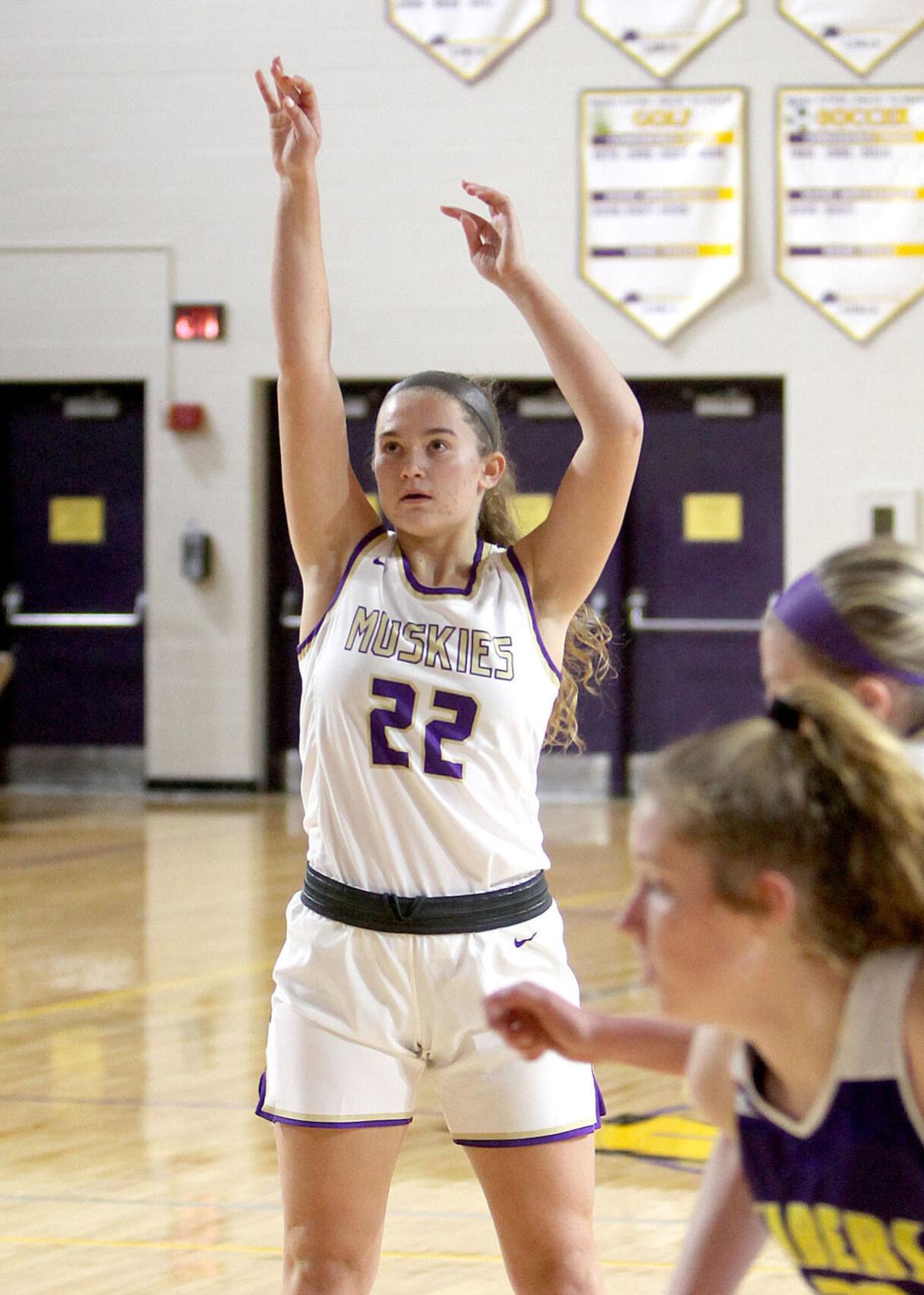 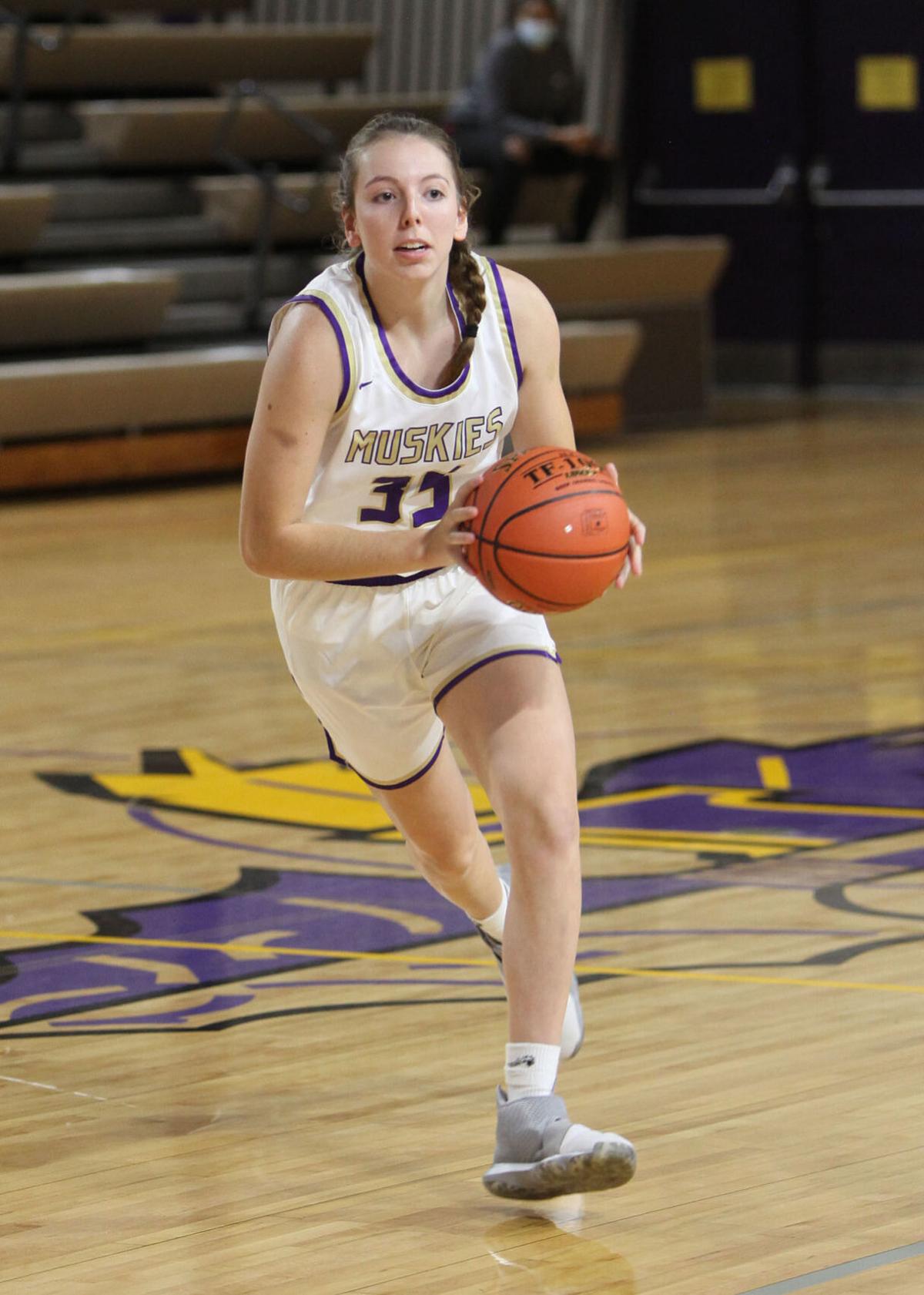 Muscatine's Avarie Eagle works the ball around the perimeter during the first quarter of Friday's game against Central DeWitt. 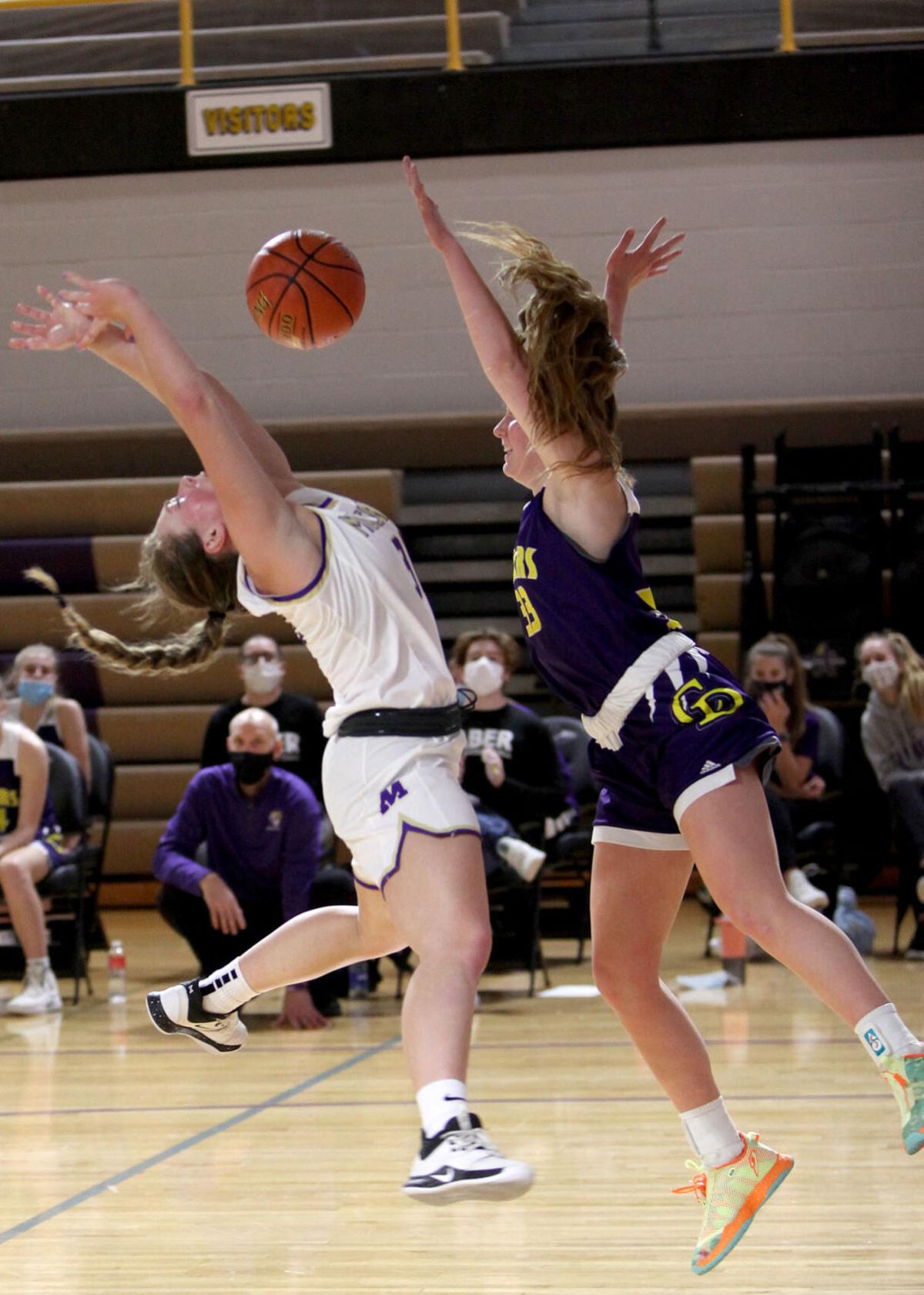 Muscatine's Rylie Moss collides with Central DeWitt's Taylor Veach while driving to the basket during the first half of Friday's game in Muscatine. 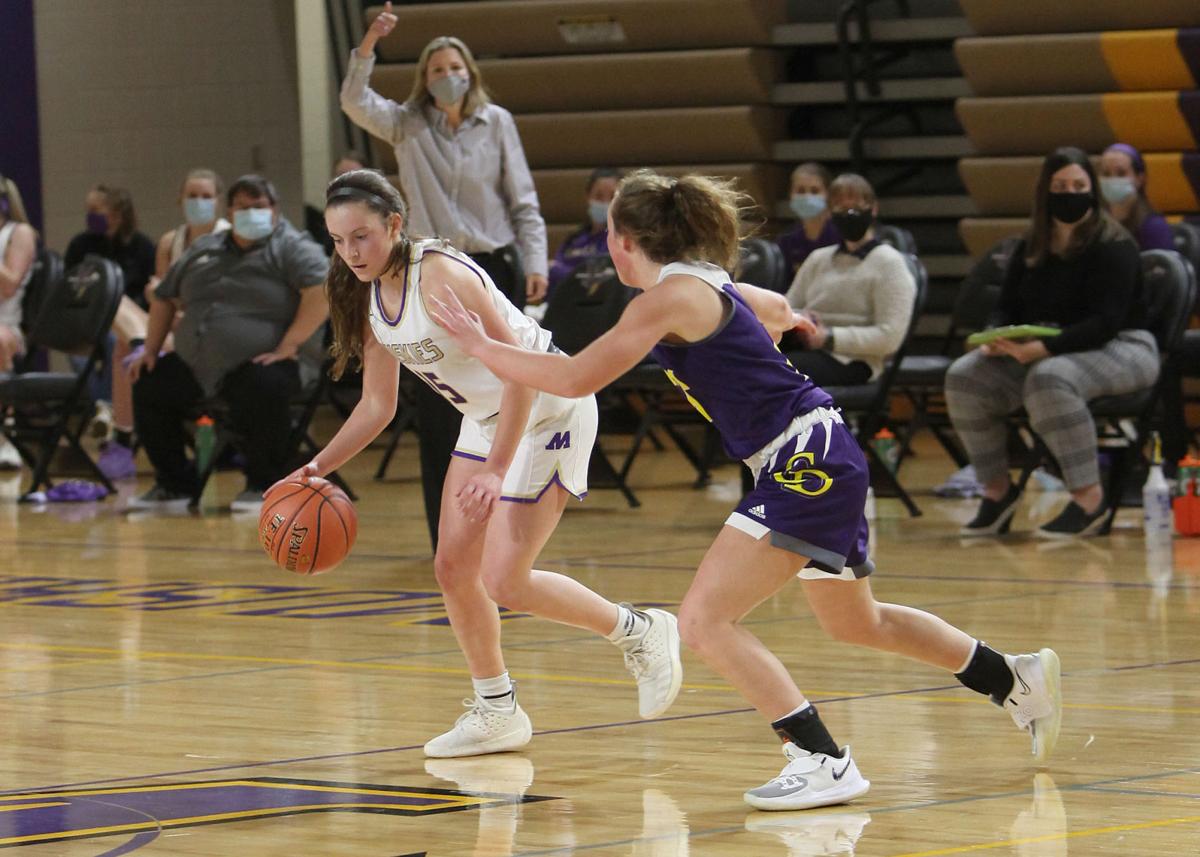 Muscatine's Grace Bode works the ball across the court during the second quarter of Friday's game against Central DeWitt in Muscatine.

Muscatine head coach Susan Orvis didn’t know exactly what she was going to get out of her team when it stepped on the court for the first game against Central DeWitt after the Muskies got off to a delayed start.

Orvis’ squad started out at a torrid pace, but Central DeWitt was able to bounce right back and escape with a 38-35 win over the Muskies at MHS on Friday night.

"I was pleased with our start, we talked about coming out aggressive and attacking," Orvis said. "Coming off the layoff ... it was great to give ourselves a bit of a margin. We knew it probably wasn't sustainable. I liked seeing us take charge."

The Sabers certainly offered the Muskies a challenge. Central DeWitt came in ranked No. 5 in Class 4A, while Muscatine currently occupies the 12th-place spot in the 5A rankings.

Central DeWitt only had three players record points, and junior Natalie Butler had just two, but the damage done by fellow juniors Taylor Veach and Allison Meadows was enough to put the Sabers over the top by the end of the game.

Muskie junior Grace Bode hit two free throws for her only points of the game with 2:29 remaining the fourth. That gave MHS a 33-31 lead.

Meadows, who ended with a game-high 25, put the Sabers back up on top shortly after the Bode free throws.

With 58.8 seconds to play, Muscatine (0-1, 0-1 MAC) inbounded the ball under its own hoop down one. The possession ended with senior Rylie Moss driving the lane and stumbling while drawing contact. No foul was called, resulting in a Muskie turnover, which led to two free throws from Meadows to put Central DeWitt (5-0, 2-0 MAC) up three at 36-33.

Moss would then make her way to the charity stripe, but only one of two dropped.

Veach missed her ensuing free throw, and Long raced down the floor for Muscatine and drew contact under the basket. This time a call would be made, sending Long to the line for two potentially game-tying free throws. Veach ended with 11 points.

Again, Muscatine converted only one. After Meadows canned two more free throws for the Sabers with 2.2 ticks left on the clock, a Moss heave from three-quarters court sailed wide.

Muscatine’s hot start was largely the product of the shooting of Zoey Long, who went 3-of-3 from 3-point range while also hitting a couple free throws to finish the opening frame with 11 points. The Muskies led 16-4 at that point.

But that wasn’t anything new for the Sabers.

“Every game this year, we’ve started slow,” Specht said. "We're trying to figure out what's causing that. But, that being said, they've learned and grown from that. Their resilience is showing and hopefully that will only help us down the road.

"(Our start) is surprising, honestly. This is a darn good conference."

Long ended with 15, scoring just the single free throw after the halftime break. She shot 3-of-7 from three-point range and 4-of-10 overall.

Muscatine made some nice entry passes into the low post for senior Madi Petersen, who finished as she went 5-of-7 from the floor and had 11.

The return of Muskie senior Alicia Garcia will have to wait for another game. The UNI commit missed all of last season following knee surgery. Garcia didn’t dress for this one. Though she’s practiced, the staff just felt more comfortable waiting.

"We put ourselves in a position to not only be competitive, but to be in the ballgame, we were thrilled with that and pleased with the effort," said Orvis. "There are just a lot of things we can look forward to correcting and tweaking and hopefully getting better to get over the hump."

Wapello demolishes Cal-Wheatland to advance in 1A tournament

WAPELLO — It was a first quarter Trenton Murray could have only dreamed of.

DES MOINES — For the first time in a decade, the Muscatine wrestling program can boast it has multiple state place winners in the same season.

WATERLOO — The Louisa-Muscatine girls bowling team is the state champion for the fifth season in a row.

Muskies clutch down stretch to advance past Senior

DES MOINES — Tim Nimely and Togeh Deseh, two of the most accomplished wrestlers to come through Muscatine’s program in recent memory, put a bo…

For many — if not all — of the members of the Louisa-Muscatine girls bowling team, more stress came from watching the Falcon boys team try to …

Muscatine's Zoey Long makes a quick pass during the second quarter of Friday's game against Central DeWitt at Muscatine.

Muscatine's Avarie Eagle works the ball around the perimeter during the first quarter of Friday's game against Central DeWitt.

Muscatine's Rylie Moss collides with Central DeWitt's Taylor Veach while driving to the basket during the first half of Friday's game in Muscatine.

Muscatine's Grace Bode works the ball across the court during the second quarter of Friday's game against Central DeWitt in Muscatine.