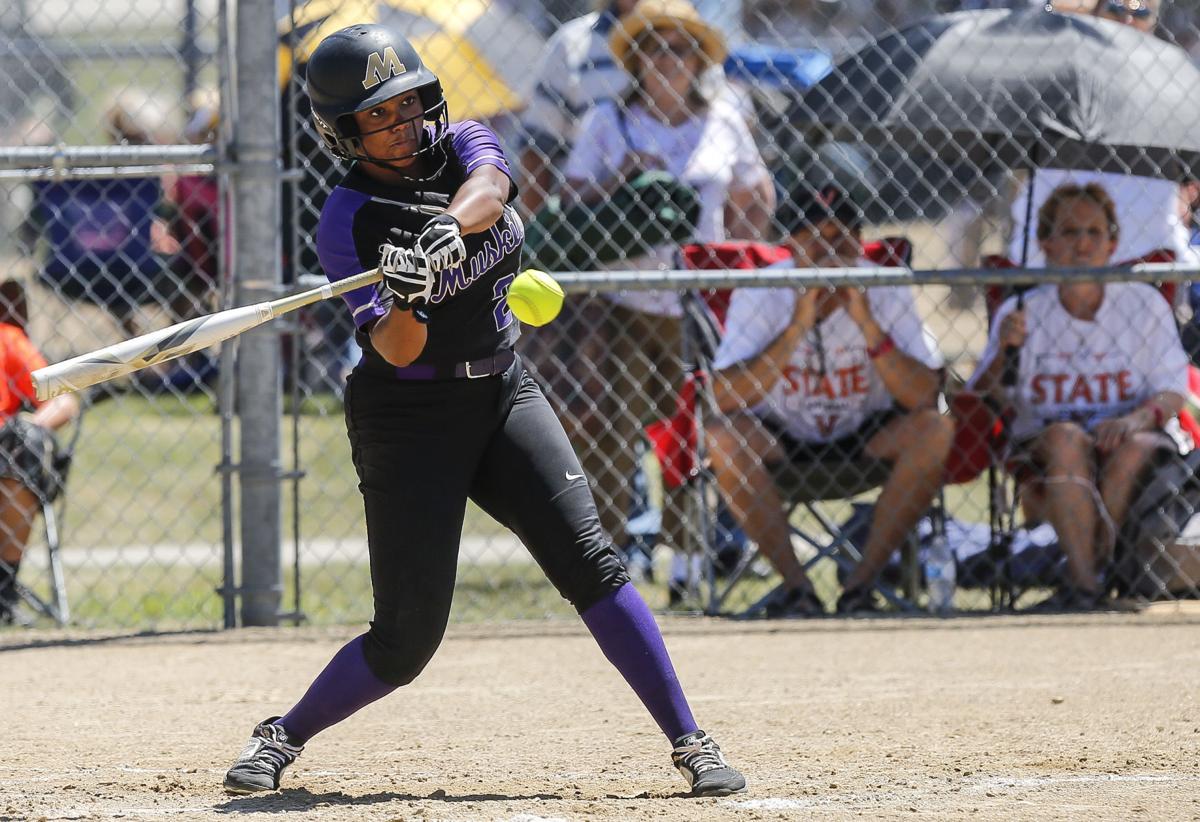 Muscatine's Malia Cook swings through a pitch against West Des Moines Valley Monday during the quarterfinal round of the state softball tournament at Harlan and Hazel Rogers Sports Complex in Fort Dodge. 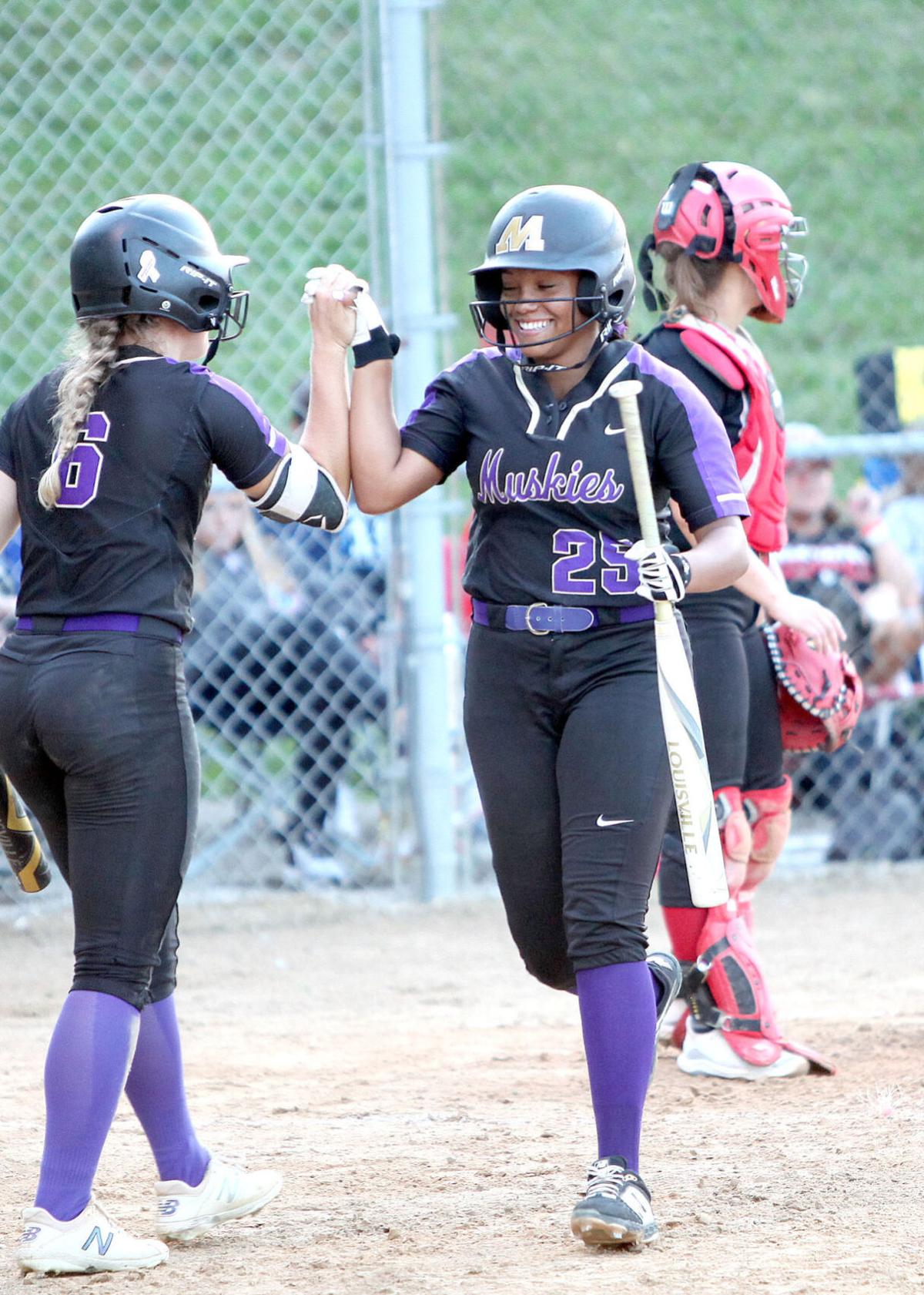 Muscatine's Malia Cook is congratulated by teammate Rylie Moss after hitting a three-run home run during the top of the fifth inning of Tuesday's regional final against Iowa City West.

The Muskies have been playing very confidently as of late heading into Wednesday's state semifinal showdown with Cedar Rapids Kennedy.

And that confidence is yielding results, considering the Muskies' recent 14-3 regional final thrashing of Iowa City High, a team which beat Kennedy 12-1 to hand the Cougars their only loss of the season.

But pinpointing a moment when the Muskies put things into another gear isn’t all that hard. Muscatine’s confidence level has been sky high since an eight-run seventh inning against Davenport North on the front side of a double-header helped lift Muscatine to a 12-11 win in 10 innings and preserved the opportunity for the Muskies to win the MAC outright, which they would go on to do.

Even more specifically, Malia Cook’s pinch-hit three-run home run during that game might stand as one of the biggest at-bats of the Muskie season. The junior’s shot was part of that eight-run rally and shrunk the North lead to one in the blink of an eye.

The Muskies have been riding the high ever since.

And Muscatine's success has been recognized on both the individual and team levels in the past 24 hours.

Eight Muskies were recognized on the all-conference teams with junior center fielder Rylie Moss and coach Steve Hopkins winning player and coach of the year respectively.

“This whole week has been a whirlwind,” Moss said. “Going to state for the first time was a big goal for us. Then winning our game (against West Des Moines Valley) and being named player of the year really just topped off this amazing stretch.

“I’m just so proud of our team. It’s already been an amazing season.”

For all their strengths, the depth of Muscatine’s lineup has been crucial. There are no easy outs in the Muskie order.

Kennedy, however, sports one of the state’s stingiest pitching pairs. Senior Kaylin Kinney holds a microscopic 0.37 ERA this season over 57 innings while junior Jayme Scheck is right there as well with a 0.67 ERA in 52 innings pitched. The duo is 18-0, this season including Monday's quarterfinal win over Pleasant Valley, which handed Muscatine one of its two losses on the season.

The Cougars’ (24-1) ability to split the game with two outstanding pitchers may create a difficult situation for the Muskies, who may only see each pitcher once or twice, making it very difficult to use prior at-bats as a gauge.

“Up and down the lineup, we put the ball in play and hit the ball hard,” Hopkins said. “We had a lot of runners left on base (against Valley). I thought there were opportunities where we could have really blown the game open. We didn’t capitalize on those, but when you get in big games like these, you have to minimize the mistakes and make the most of opportunities, so that’s what we’re going to go (against Kennedy).”

At stake: Winner advances to Thursday’s 5 p.m. championship game against winner of No. 1 Fort Dodge and No. 6 Ankeny Centennial.

Need to know: Kennedy has never reached a state final in softball. Muscatine is seeking its first trip to a championship game in 20 years (the last of its two state titles). The Cougars are paced by Kinney, a Nebraska recruit who has yielded just three earned runs in 57 innings this year. Also the team’s top hitter, Kinney is coming off a three-hit performance in Monday’s quarterfinal win over PV. Muscatine has won seven in a row, matching its longest streak of the season. The Muskies have struck out just 42 times all season, lowest in 5A.

Muscatine's Malia Cook swings through a pitch against West Des Moines Valley Monday during the quarterfinal round of the state softball tournament at Harlan and Hazel Rogers Sports Complex in Fort Dodge.

Muscatine's Malia Cook is congratulated by teammate Rylie Moss after hitting a three-run home run during the top of the fifth inning of Tuesday's regional final against Iowa City West.