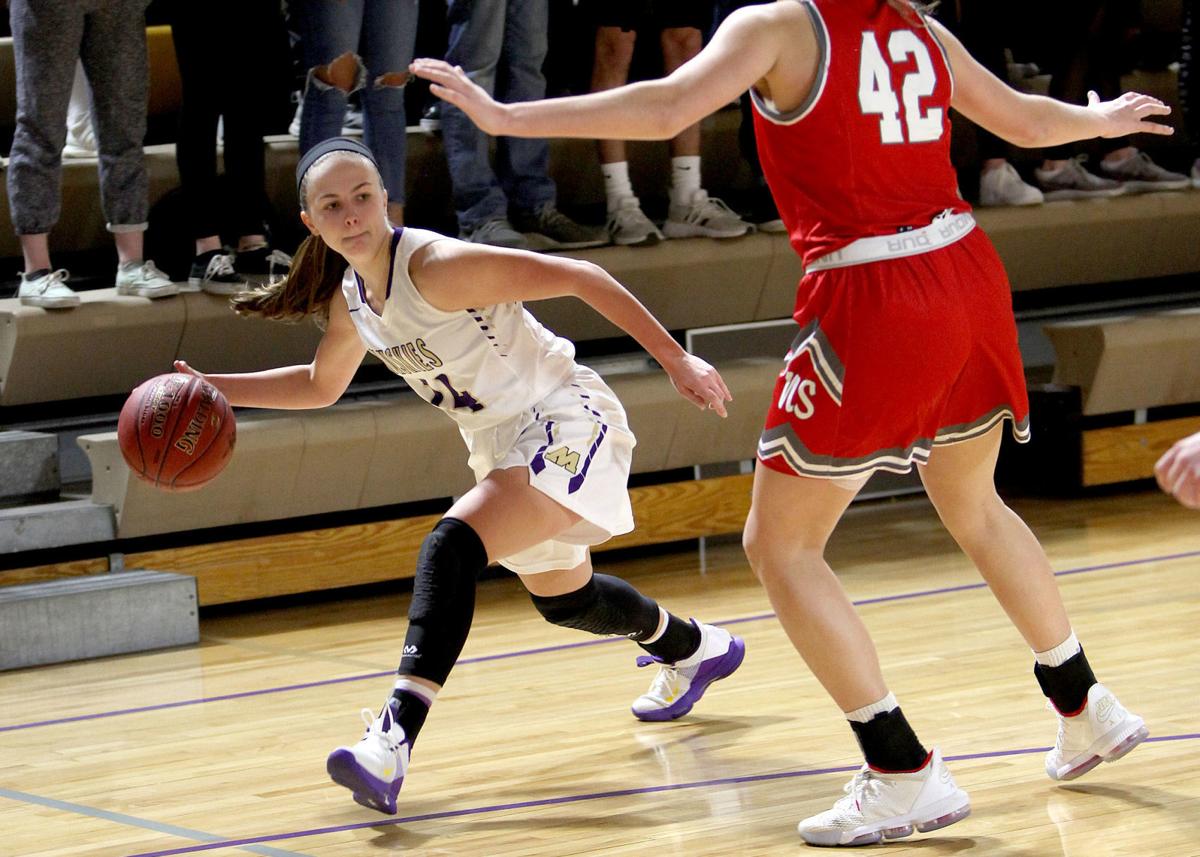 Emily Woepking of Muscatine makes a pass down the baseline past Grace Boffeli of North Scott during the first quarter of the Muskies loss. 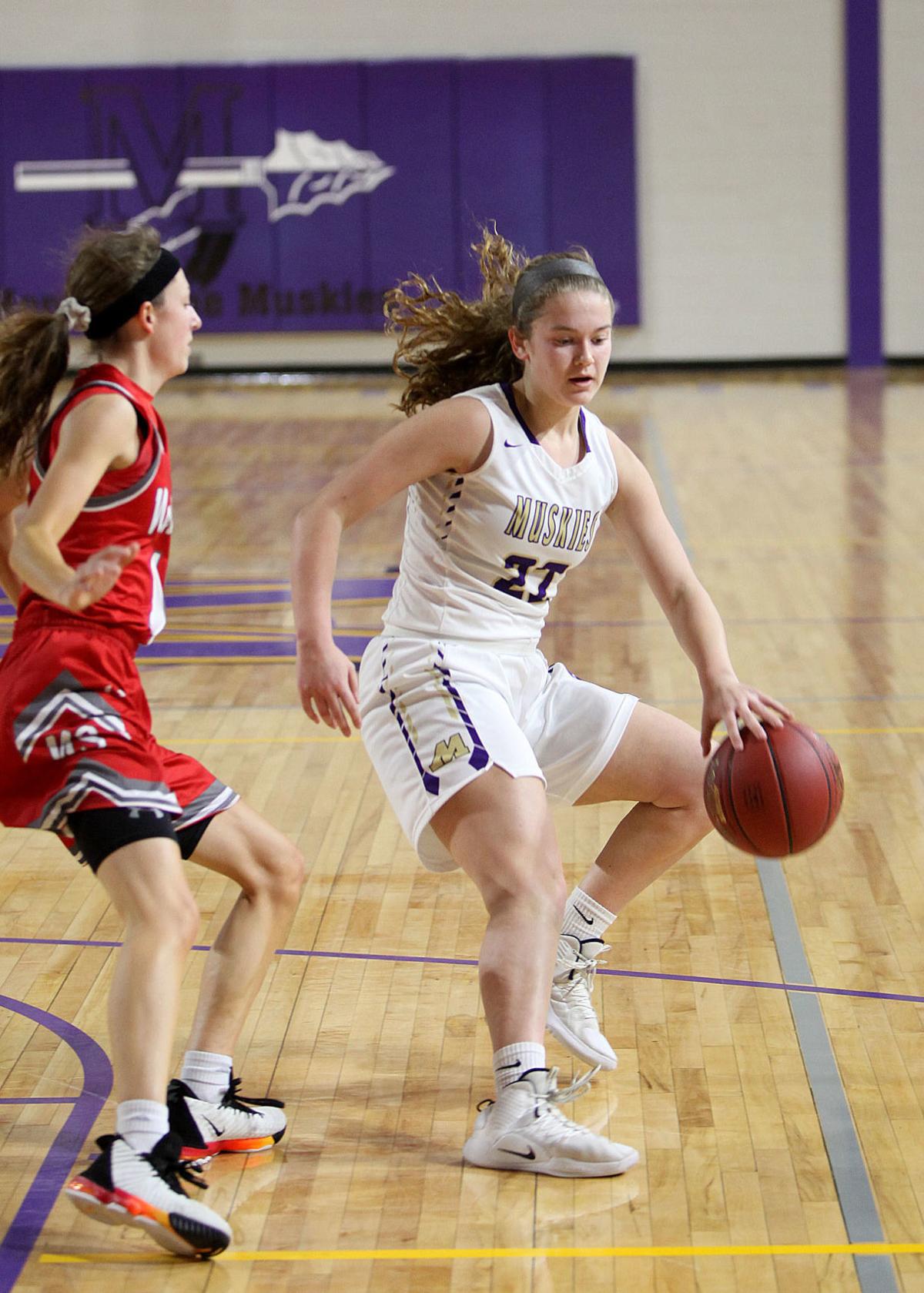 Emma Zillig of Muscatine works the ball toward the basket during the first half Tuesday against North Scott. 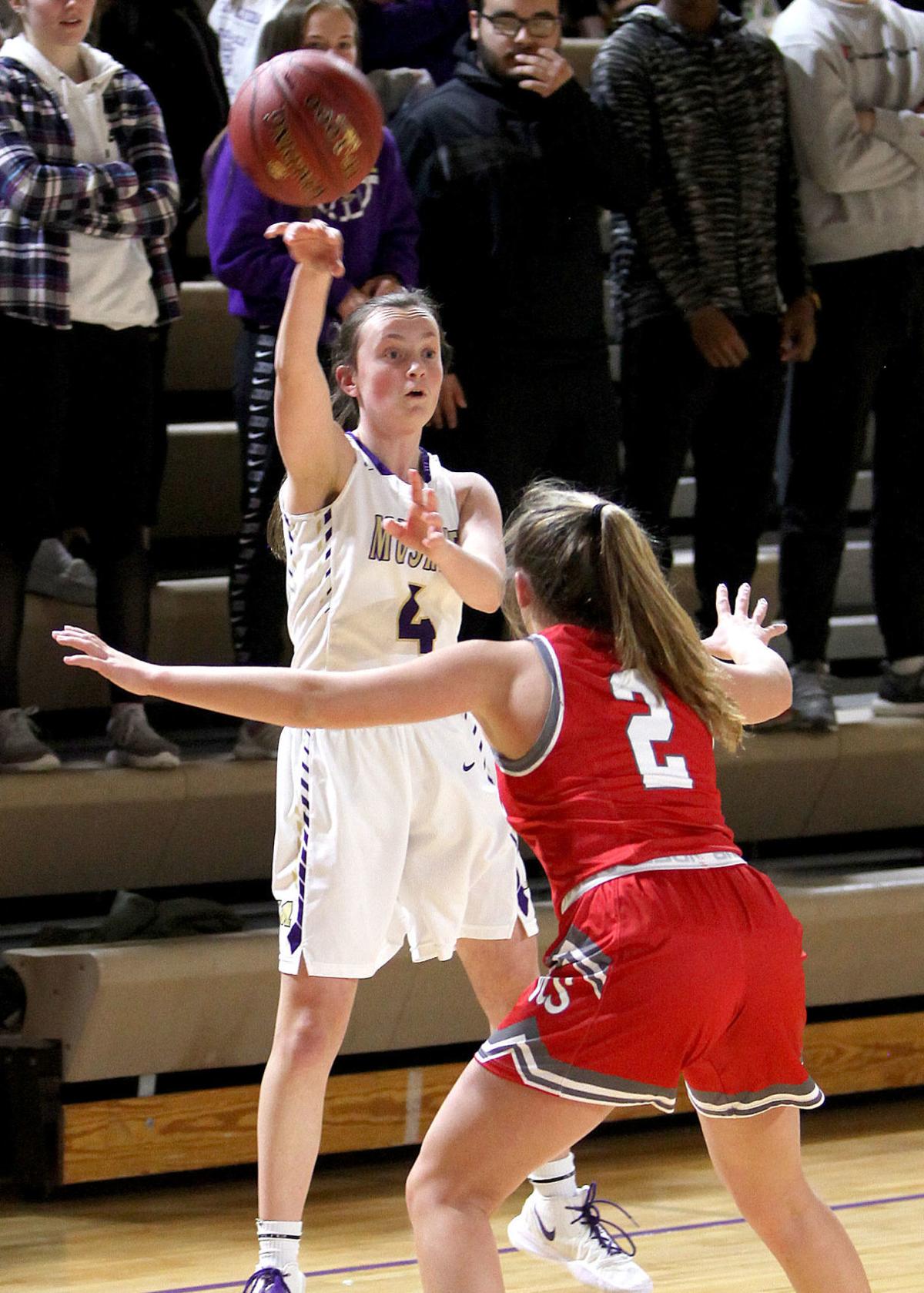 Zoey Long of Muscatine makes the pass over Presley Case of North Scott during the second quarter Tuesday. 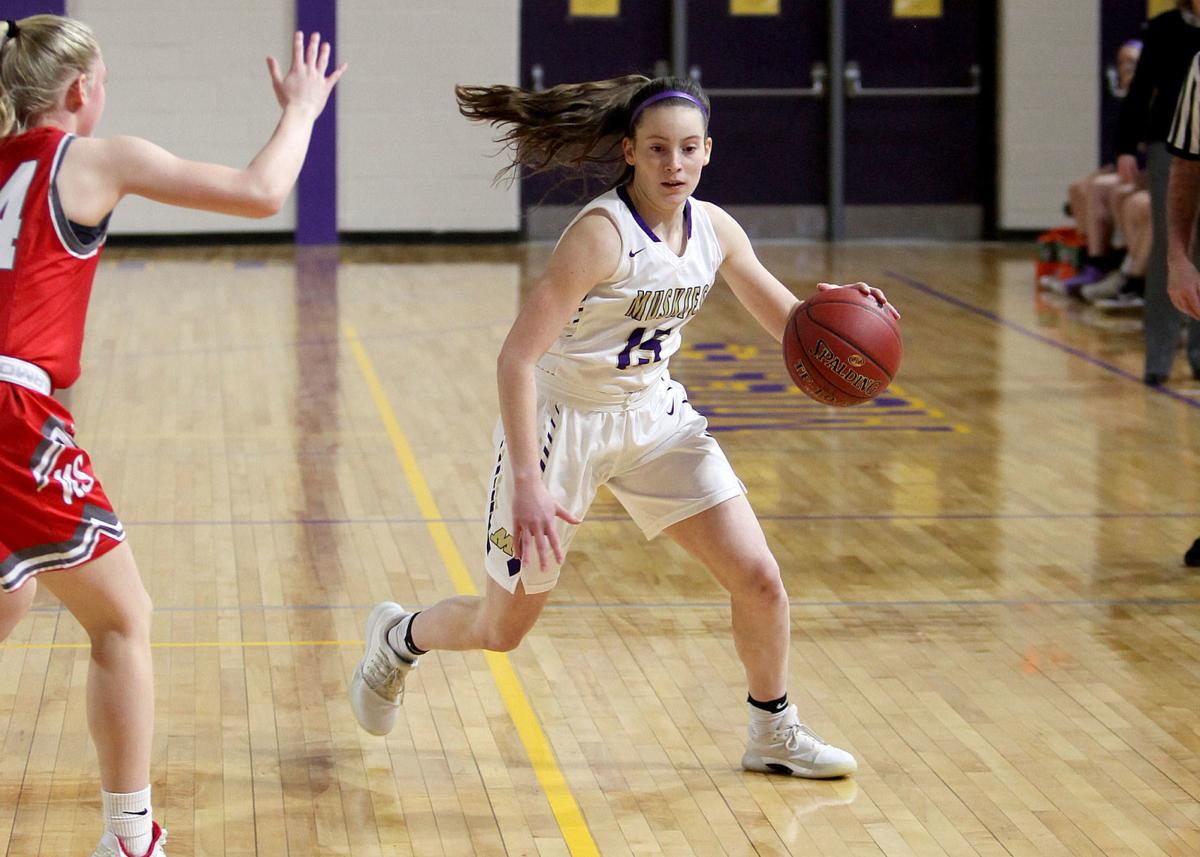 Grace Bode of Muscatine works the ball to the outside during the second quarter Tuesday. 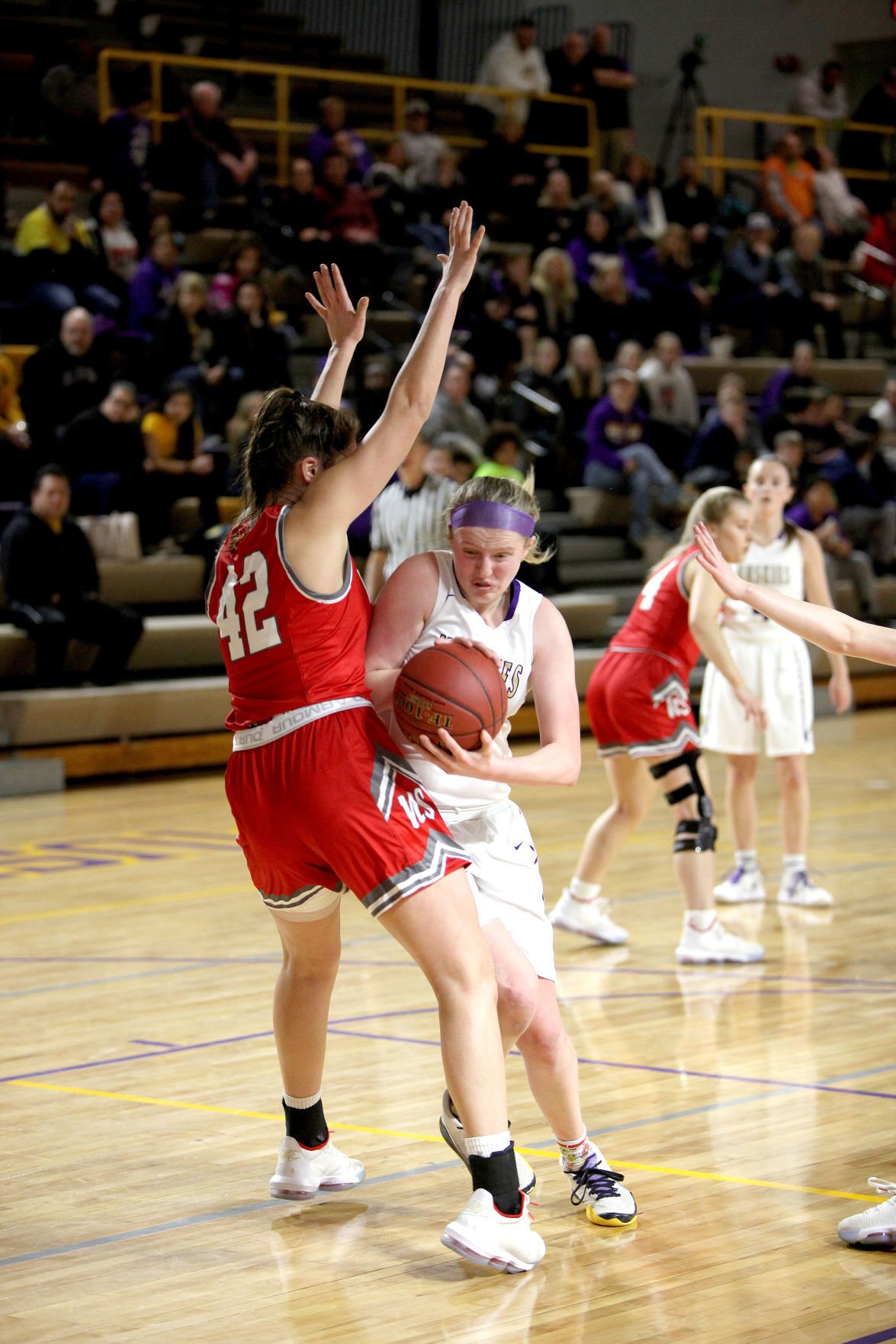 Madi Petersen of Muscatine drives the lane and gets fouled by Grace Boffeli of North Scott during the second quarter Tuesday.

Emily Woepking of Muscatine makes a pass down the baseline past Grace Boffeli of North Scott during the first quarter of the Muskies loss.

Emma Zillig of Muscatine works the ball toward the basket during the first half Tuesday against North Scott.

Zoey Long of Muscatine makes the pass over Presley Case of North Scott during the second quarter Tuesday.

Grace Bode of Muscatine works the ball to the outside during the second quarter Tuesday.

Madi Petersen of Muscatine drives the lane and gets fouled by Grace Boffeli of North Scott during the second quarter Tuesday.

Both the North Scott and Muscatine girls basketball teams came into Tuesday night’s game with the same objective — stop the opponents’ leading scorer.

To varying degrees, both were successful in meeting their goals. North Scott senior Grace Boffeli, who came in averaging 30.2 points per game, was held to a season-low 13.

Muscatine junior Zoey Long, who entered the contest as the Mississippi Athletic Conference’s second-best scorer on a per-game basis with 15 a game, scored 10.

In the end, though, it was TJ Case’s top-ranked and unbeaten Lancer squad that had more tricks up its sleeve in a 51-30 win over the Muskies.

At halftime, the game was still well within Muscatine’s reach as they trailed 18-12 at the intermission. But with a little over four and a half minutes to play in the third, North Scott’s coach took a timeout to implement a full-court press on the Muskies. It was a different game from that point on.

The defensive strategies were clear from the get-go. Muscatine (6-7, 3-5 MAC) came out aggressively double-teaming Boffeli, even tripling her at times. That put a lot of pressure on their perimeter defenders and the rotations they made around the key.

While the strategy worked on Boffeli, the Lancer shooters came alive after the halftime break which, along with the increased defensive pressure, put the game out of reach for the Muskies.

“We knew they were probably going to come up with some type of gadget to stop (Boffeli),” Case said. “I have a lot of confidence in our shooters, we didn’t overly well in the beginning, plus I want to play another post with Grace, so (Muscatine) forced us to go to four guards and I thought we were better with the four guards and we shot it better in the second half.

“It also helped us (when we went to) the press and were a little quicker. It took some points away from Grace, but she gets it, she’s a team player.”

Boffeli finished 5-of-7 from the field and 3-of-3 from the foul line. The Muskie defense effectively eliminated her in the half-court, but she was able to get most of her points in transition or off of inbound passes.

“I thought defensively, our kids did everything we asked them to do,” Muscatine head coach Susan Orvis said. “They did a really nice job with the game plan, it was something we don’t do very often, but they really came out and played aggressively (on defense). I couldn’t be more proud of their effort and attention to detail. It gave a chance to hang around.”

Still, with all the attention down low, North Scott (11-0, 8-0 MAC) managed to get clean outside looks consistently. They finished 8-of-24 from 3-point range.

Likewise, the Muskie offense had to try and create looks for other scorers, besides Long, as the Lancers started the game in a box-and-one defense to maximize pressure on the Muskie junior.

Muscatine was able to generate clean looks, especially in the first half, but wasn’t able to get them to fall. Their only score in the opening frame of the game came on a three from senior Emily Woepking, who ended as the Muskies’ second-best scorer for the night with eight.

“I thought we had — and took — great shots, we just missed them,” Orvis said. “That’s part of it, but we’ve got to encourage ourselves to take those when we need to.”

But it was shortly after that when the Lancers’ press forced multiple Muskie turnovers and spark their run to secure the win.

“Our kids learned what they can do when they put it all together,” said Orvis, “but we just have to continue to find ways to put points on the board. We didn’t have as many turnovers as the other night against Bettendorf, but they came at really key times.”

Get exclusive local and national political news in your inbox.