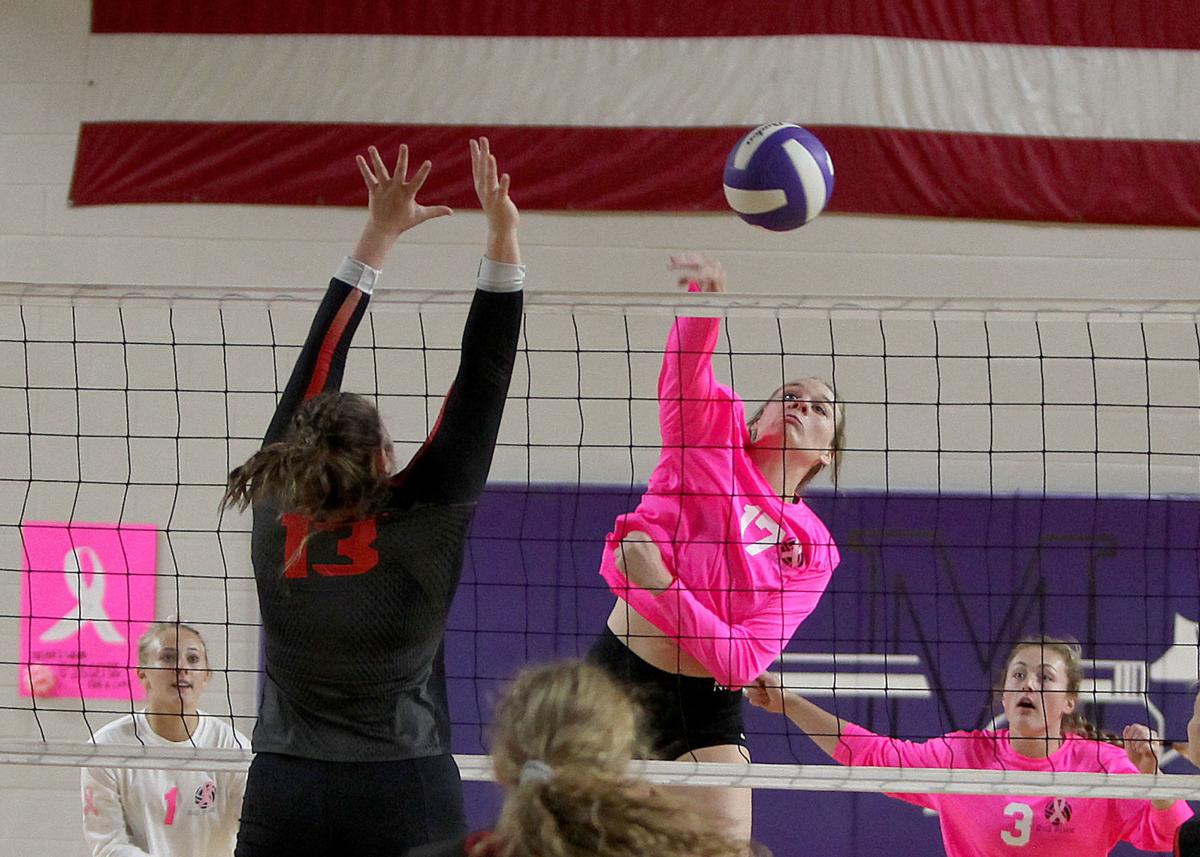 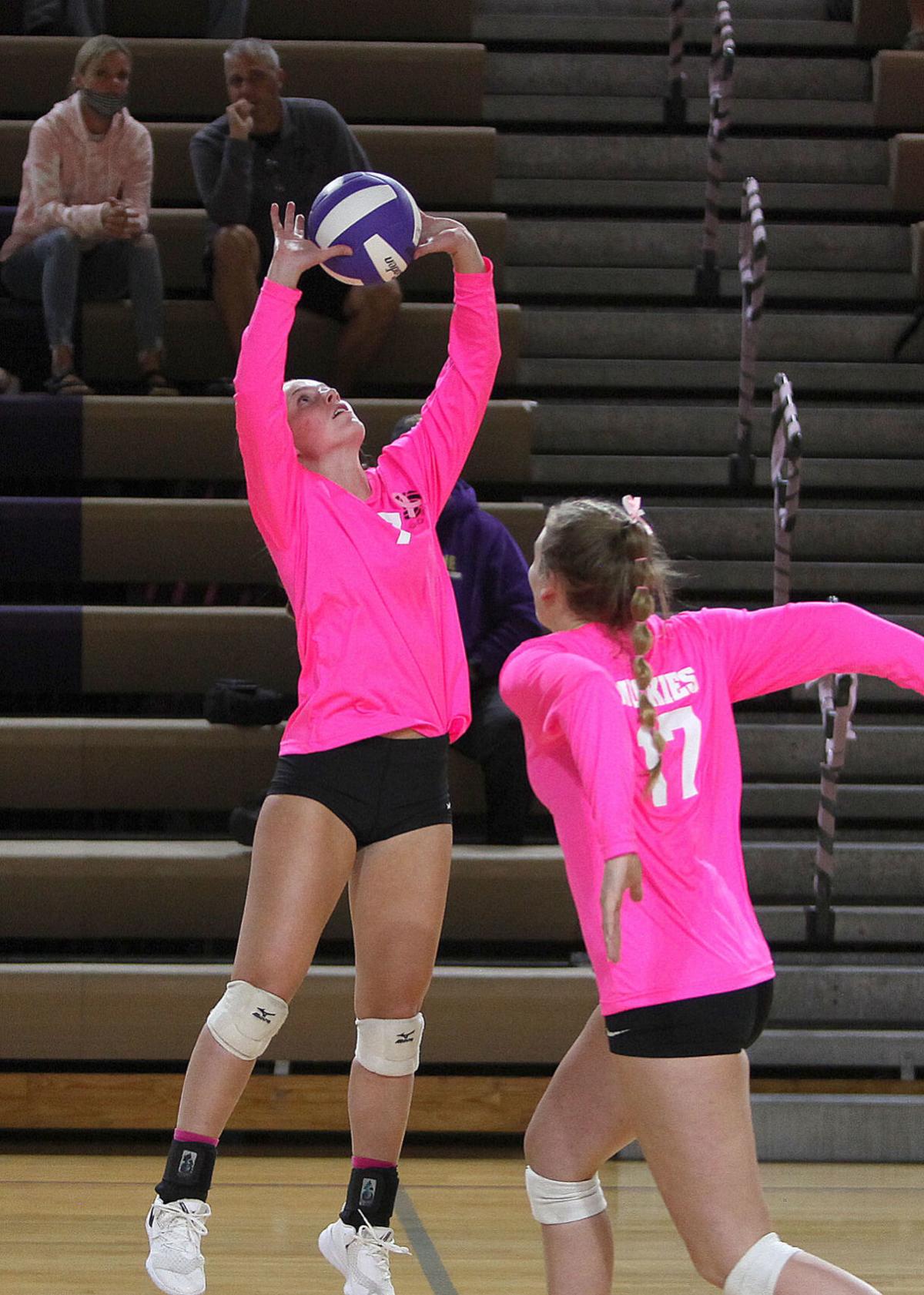 Muscatine's Kaylynn Salyars sets the ball to teammate Meadow Freers during the first set of Tuesday's matchup with Clinton. 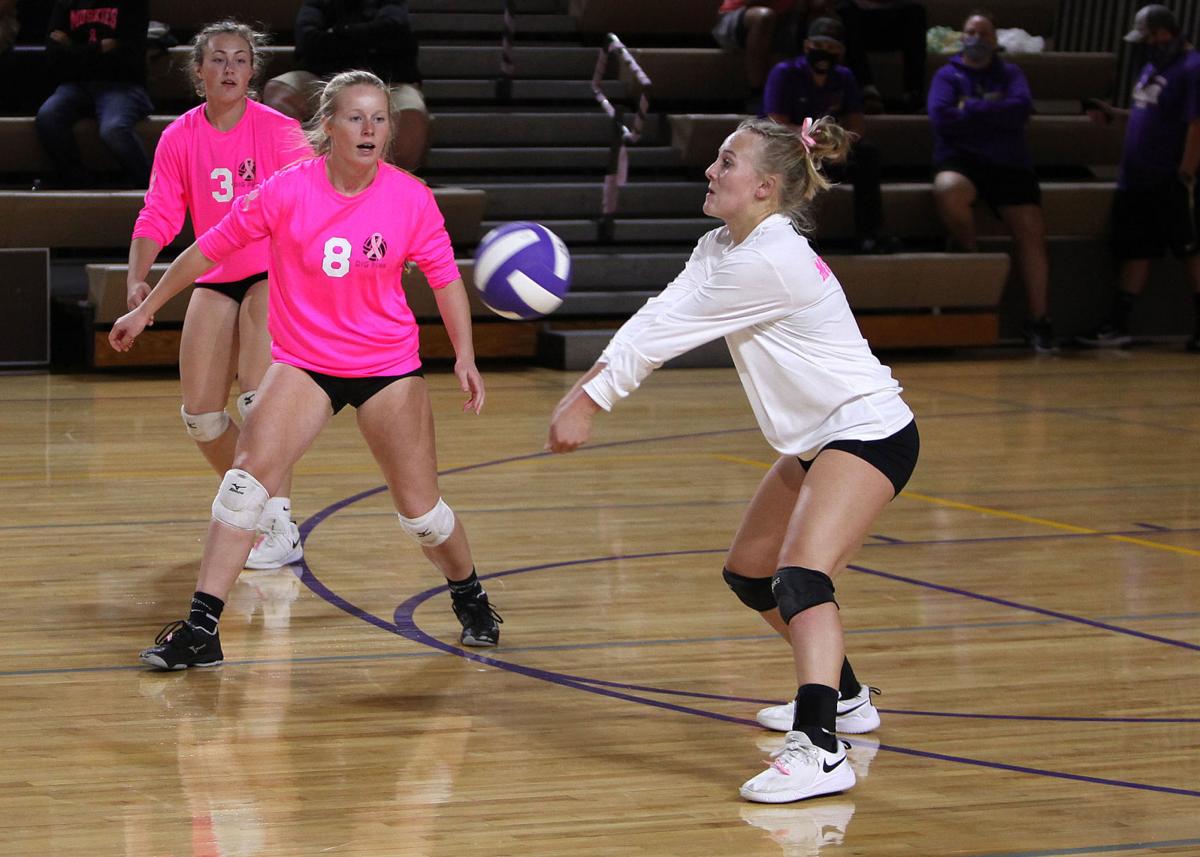 Muscatine's Aricka Ramser passes the ball during the first set of Tuesday's matchup with Clinton. 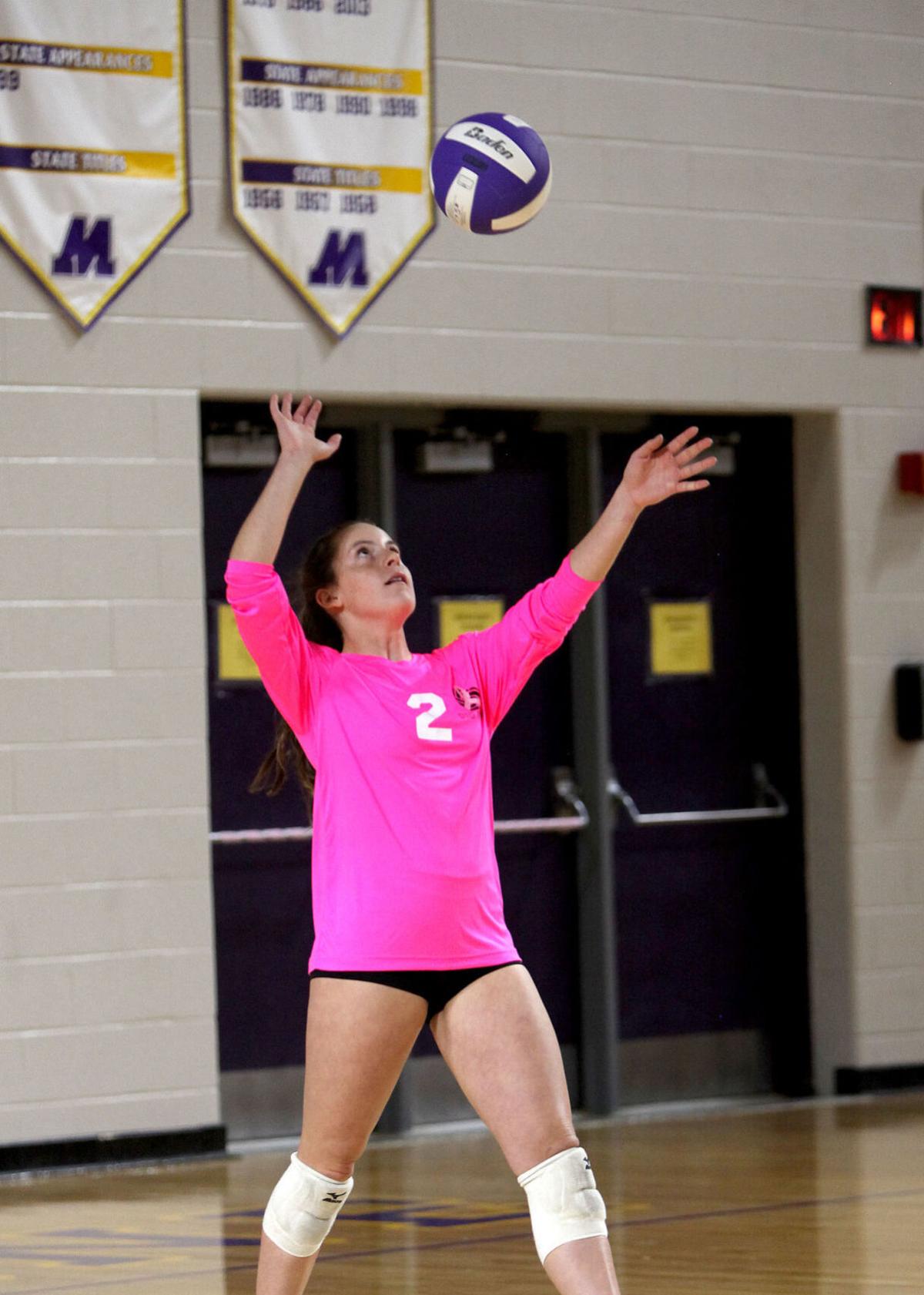 Muscatine's Grace Bode serves during the second set of Tuesday's matchup with Clinton. 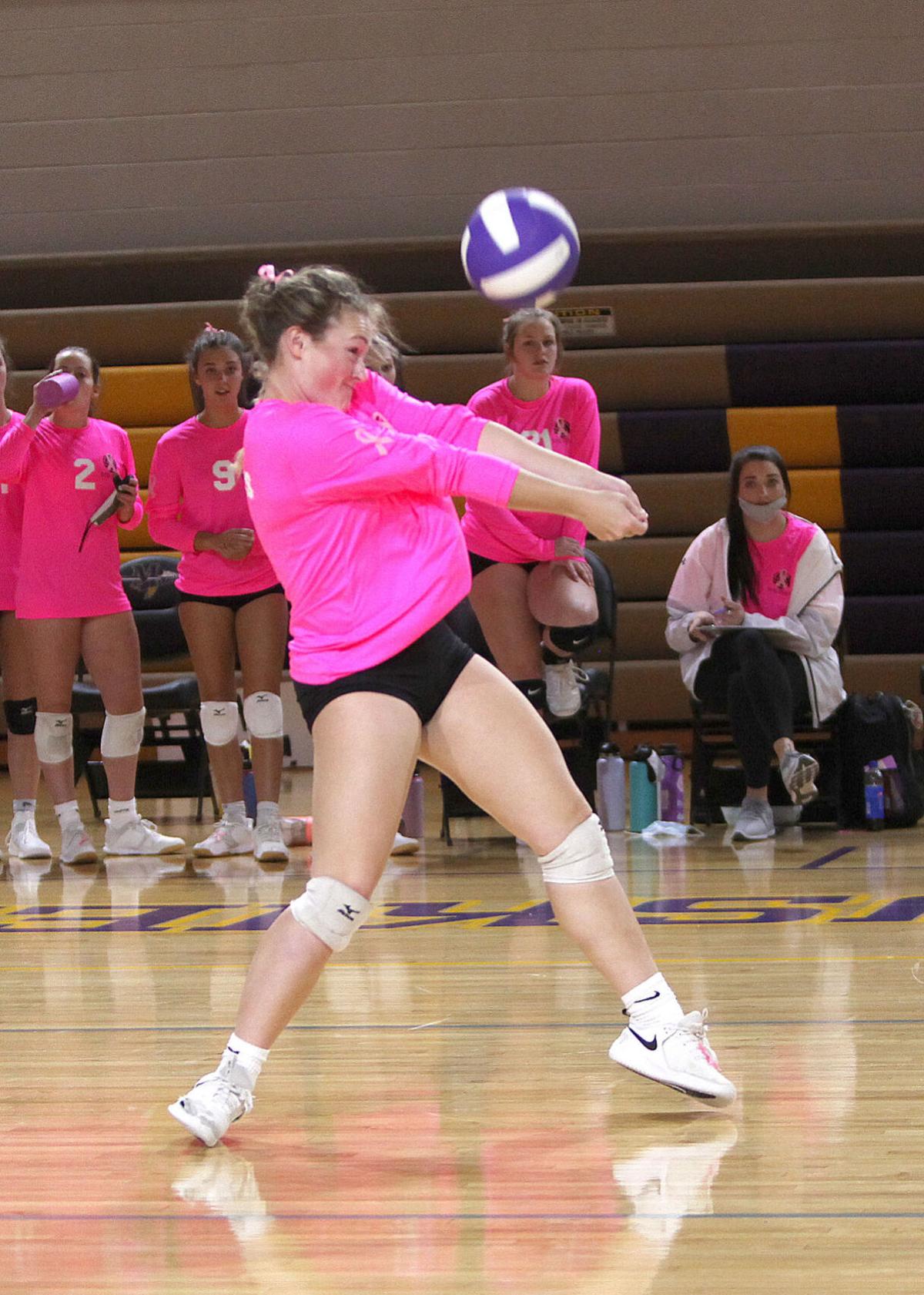 Muscatine's Rylie Moss keeps the ball alive during the second set of Tuesday's matchup with Clinton.

Although there isn’t much distance between Clinton and Muscatine in the Mississippi Athletic Conference volleyball standings, the River Queens seem to have the Muskies’ number when the teams match up head-to-head.

On Tuesday night in Muscatine, Clinton defeated the Muskies in straight sets for the second time since Saturday, the most recent going four sets and ending in a River Queen win. Clinton won Tuesday night by scores of 25-19, 17-25, 25-20, 25-21.

With the loss, Muscatine slipped to sixth in the MAC, but the Muskies have done enough over the course of the season that the team did slip into the 5A state rankings, appearing at No. 14 in the newest poll that came out last Thursday. Clinton was ranked 12th in Class 4A.

Over the weekend, the sides met at the Bettendorf tournament, and the River Queens took that one in two sets, 21-12, 21-16.

“We knew (Muscatine) didn’t play well on Saturday,” said Clinton head coach Micah Cewe. “We knew they were a lot better, we definitely respect what they’ve done up to this point in the season. They have some good hitters, and they are a scrappy defensive team. Every year we’ve been here, they play outstanding defense.

“It’s always good to go on the road in the MAC and get a win.”

The Muskies scored a big win in the second set Tuesday night, but it proved to be the only set victory the Muskies would manage in the six sets MHS had played against Clinton since Saturday.

Senior Olivia Harmon and junior Meadow Freers were big down the stretch of Set 2, scoring several points as the Muskies closed it out.

Freers ended with a team-high 10 kills, Harmon had eight and Madi Petersen chipped in six. Senior setter Kaylynn Salyars had 23 assists while also recording eight digs, a block and a pair of aces.

Salyars also had a couple of kills down the stretch as the Muskies moved some pieces around to make up for some injuries suffered over the course of the match.

“One of our outside (hitters) is hurt, so we took her out during the last couple points,” Russell said. "Having to (go through) switches like that and mixing it up made it (more difficult).”

Though the most recent meeting between the Muskies and River Queens was the more competitive, the Muskies had to work harder for points throughout the evening.

Clinton’s combination of junior Kailyn Graves and sophomore Makayla Howard proved too much.

Clinton head coach Micah Cewe credited the job his team’s back line did in keeping balls alive that a lesser defense might have yielded to the Muskies.

Volleyball typically is a game of momentum, but the match in Muscatine Tuesday felt a little more so than usual.

When Clinton opened the third set by racing out to a 10-1 lead, it looked like the River Queens might sail to a win after Muscatine took the second, but the Muskies made a remarkable comeback and were within a point at 16-15.

“It’s just about being consistent,” Muscatine head coach Kara Russell said. “That’s what hurt us, I still think the girls fought as hard as they could, and that’s all I can ask for.”

With the win, Clinton (17-11, 5-3 MAC) leaps out in front of the logjam behind the MAC’s top three. Class 5A No. 4 Pleasant Valley beat 3A No. 6 Assumption Tuesday night, meaning the Spartans have a leg up in regards to the MAC title, with North Scott (4A No. 4) sliding in at third and Clinton, Bettendorf (5A No. 11) and Muscatine grouped fourth through sixth, all with four or five conference wins.

“We knew whoever won this match would win that fourth-place battle,” said Cewe, “but we also knew tonight would be a fight, but I was really proud of our girls. Especially in the third set, when we put together three amazing defensive plays … our block has struggled at times this year, but our defense is what won it for us.”

To open the Class 5A playoffs, the Muskies will be at MHS to play Davenport West on Oct. 22.

“I think we were ready,” said Russell. “We usually do well with home games, but this one came down to the team that was going to finish, and that just wasn’t us tonight.”

Deep thoughts from Spencer Petras, Keith Duncan reviewing artwork and continued health questions on the Iowa offensive line are are all part o…

Iowa’s 300-pound quarterback, the Hawkeyes’ wildcat and Iowa running fakes were all questions discussed by Hawkeye coordinators on Thursday an…

Kaevon Merriweather’s patience, Keith Duncan trying to get back to par and James Franklin on Iowa’s defense are all part of today’s Hawkeye 10@10.

Hawkeye 10 @ 10: Piling on and and another milestone

Hawkeye 10@10: The problem with Penn State

Penn State’s problems, Jack Koerner creating a feeling of rejection and Spencer Petras on Iowa’s strength up front are all part of today’s Haw…

Muscatine's Kaylynn Salyars sets the ball to teammate Meadow Freers during the first set of Tuesday's matchup with Clinton.

Muscatine's Aricka Ramser passes the ball during the first set of Tuesday's matchup with Clinton.

Muscatine's Grace Bode serves during the second set of Tuesday's matchup with Clinton.

Muscatine's Rylie Moss keeps the ball alive during the second set of Tuesday's matchup with Clinton.