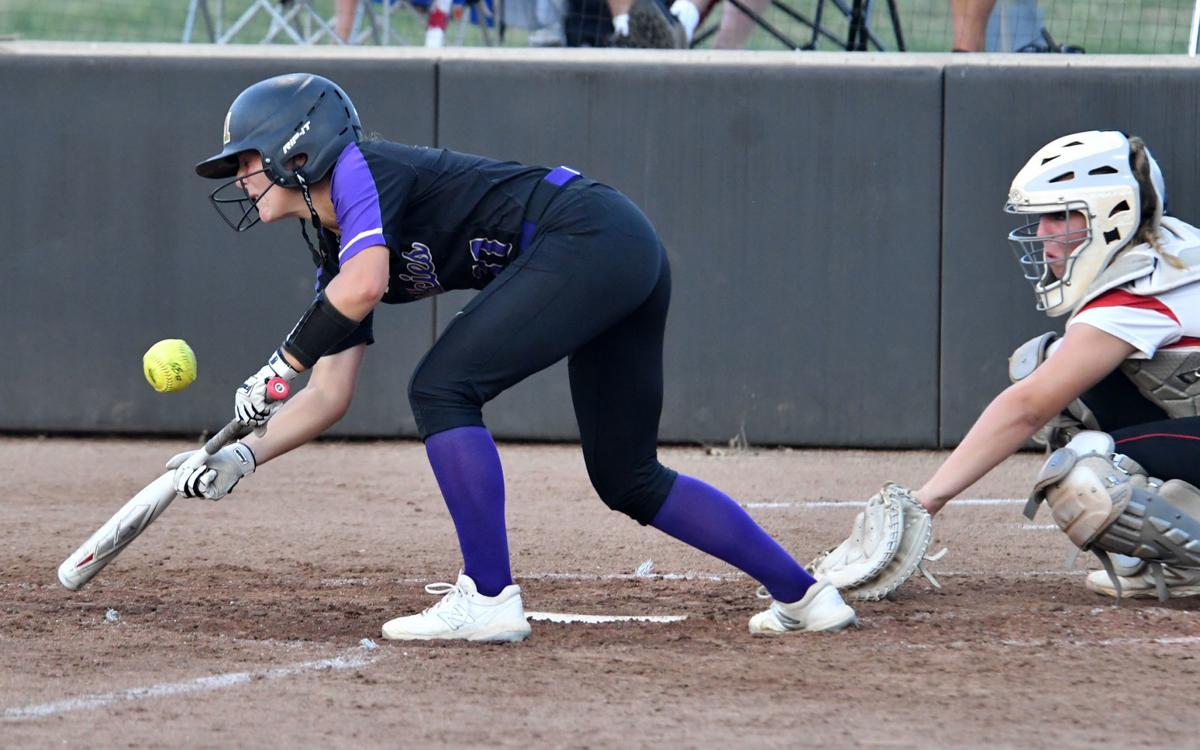 Muscatine's Aricka Ramser lays down a bunt during the fourth inning Monday night against Assumption. The Muskies managed a split in the battle between Mississippi Athletic Conference front-runners. 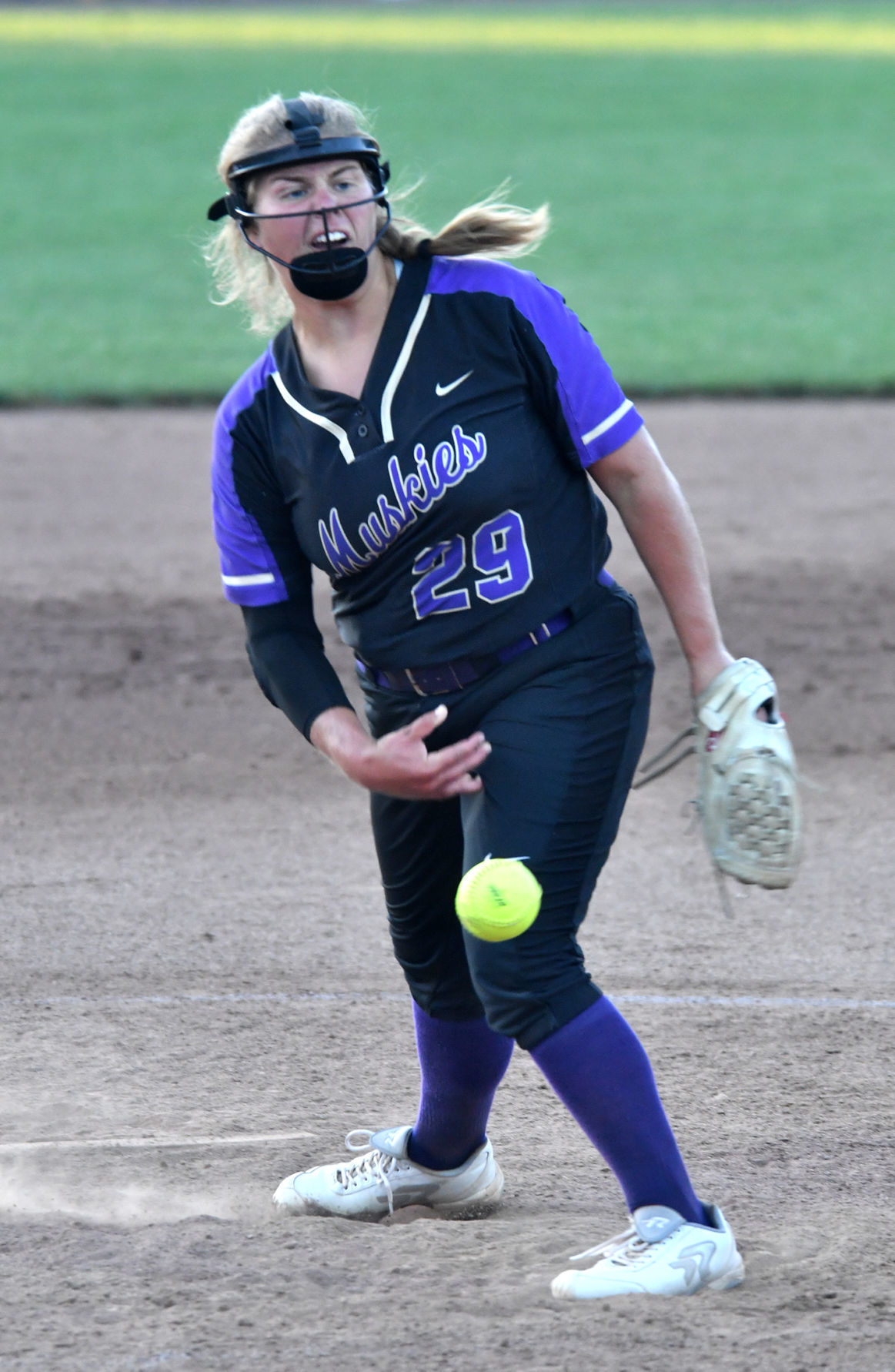 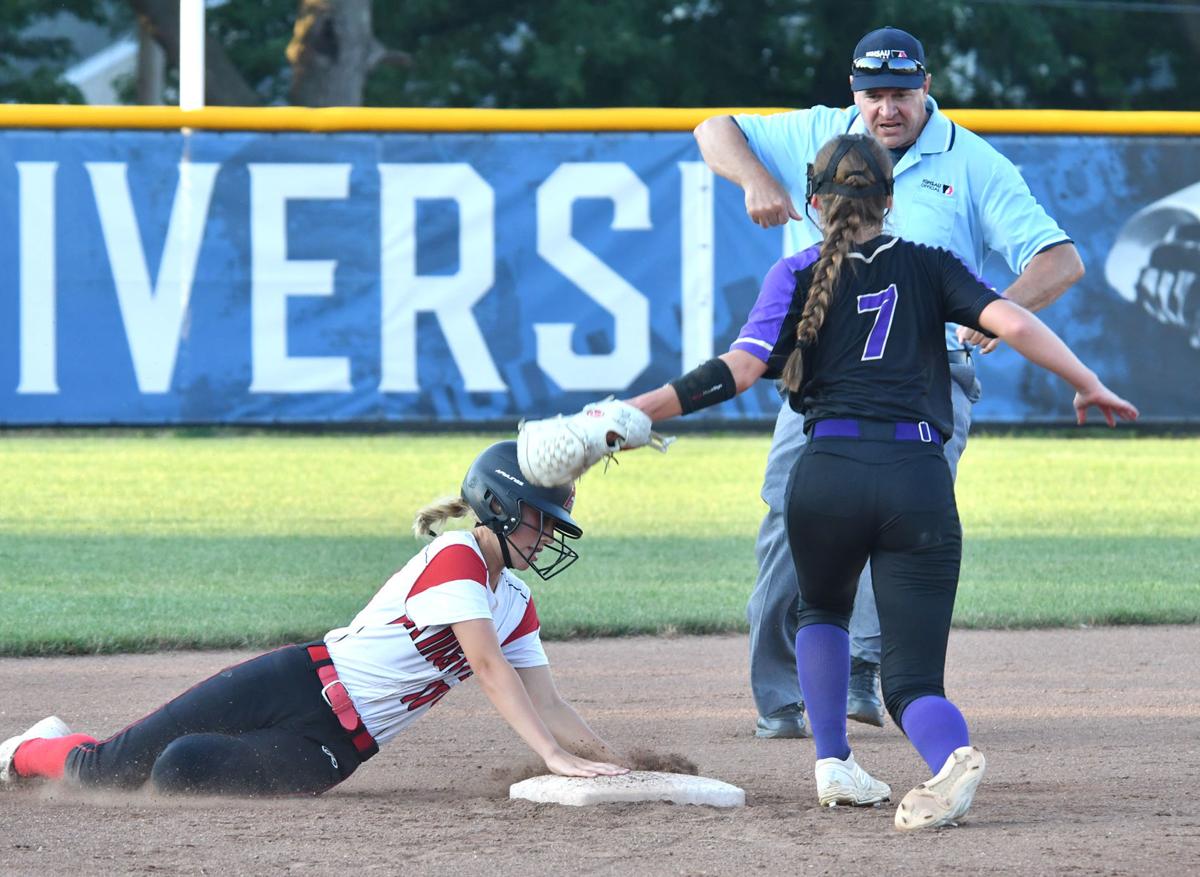 The good news for his Muscatine softball program was knocking off Class 3A top-ranked Davenport Assumption 9-3 in the opening game of a Mississippi Athletic Conference doubleheader. The sour note was squandering several chances in a 2-1 setback in the nightcap.

“That’s where the frustration is,” Hopkins said. “We had opportunities to take control of the second game and walk out of here with two wins more than likely.

“For us to continue to make strides, improve and get better, we’ve got to capitalize on opportunities and take them when they are there for us. If we want to have a chance at advancing through regionals, we have to be consistent. If we’re not, we’ll go home early.”

Still, 5A 12th-ranked Muscatine (12-2, 10-2) is tied for the MAC lead with Bettendorf and one game in front of Assumption in the loss column. Muscatine and Bettendorf square off Thursday night at Bettendorf High School. The Muskies close the conference season with a home doubleheader against Davenport North on Monday.

“(Thursday) definitely raises the stakes,” Muscatine outfielder Rylie Moss said. “One of our goals every year is to win the MAC. Knowing that it is right in our reach, we have go and take it. We have to walk in there, know we can compete and have the attitude we can do it.”

The Muskies thrived on their chances in the opener. They had only six hits but capitalized on 10 walks and two hit batsmen.

It was more than enough for Bree Seaman. The sophomore went the distance and scattered five hits against one of the top offenses in the state.

“Definitely pitching them on the outside was big,” Seaman said. “My changeup was really working tonight. That’s a huge pitch for me.

“This gives me a lot of confidence going into these next games because Assumption is really good.”

Muscatine struck first in the nightcap. Moss tripled on the first pitch of the game and later scored on a Rylee Blake ground out.

However, the Muskies couldn’t muster another run.

Moss, who had five hits in the doubleheader, led off with another triple in the fifth. Assumption freshman Leah Maro wiggled out of it. She struck out Olivia Harmon and Blake before getting Salyars to pop out.

“Arguably, the biggest inning of the year for us,” Assumption coach Ron Ferrill said. “We executed all the way around. When you have one of the best players in the state standing on third with no outs, you expect them to find a way.

“I didn’t feel like they failed. I just felt our girls executed very well in that situation.”

Muscatine had another opportunity in the seventh, but Moss’ hit to the right side hit a baserunner and cost the Muskies a chance at having two on and no outs.

“We’ve been leaning on the top of our order for the most part,” Hopkins said. “Late in the game against teams like this, you’ve got to score when you have those opportunities.”

Maura Chalupa pitched five scoreless innings for the Muskies, but the Knights tied the game on a one-out double in the sixth. In the seventh against Seaman, who came in to relieve Chalupa, Assumption tallied the winning run on a bases-loaded walk to Emily Yattoni.

Hopkins was pleased with his pitching staff. Seaman and Chalupa held the Knights to five runs in 14 innings.

“Both pitchers really threw well,” he said. “We made the change in the second game not for anything Maura was or wasn’t doing. It was to show them something different.

“To hold Assumption to three and two, you’ve got to be happy with that.”

Muscatine's Aricka Ramser lays down a bunt during the fourth inning Monday night against Assumption. The Muskies managed a split in the battle between Mississippi Athletic Conference front-runners.