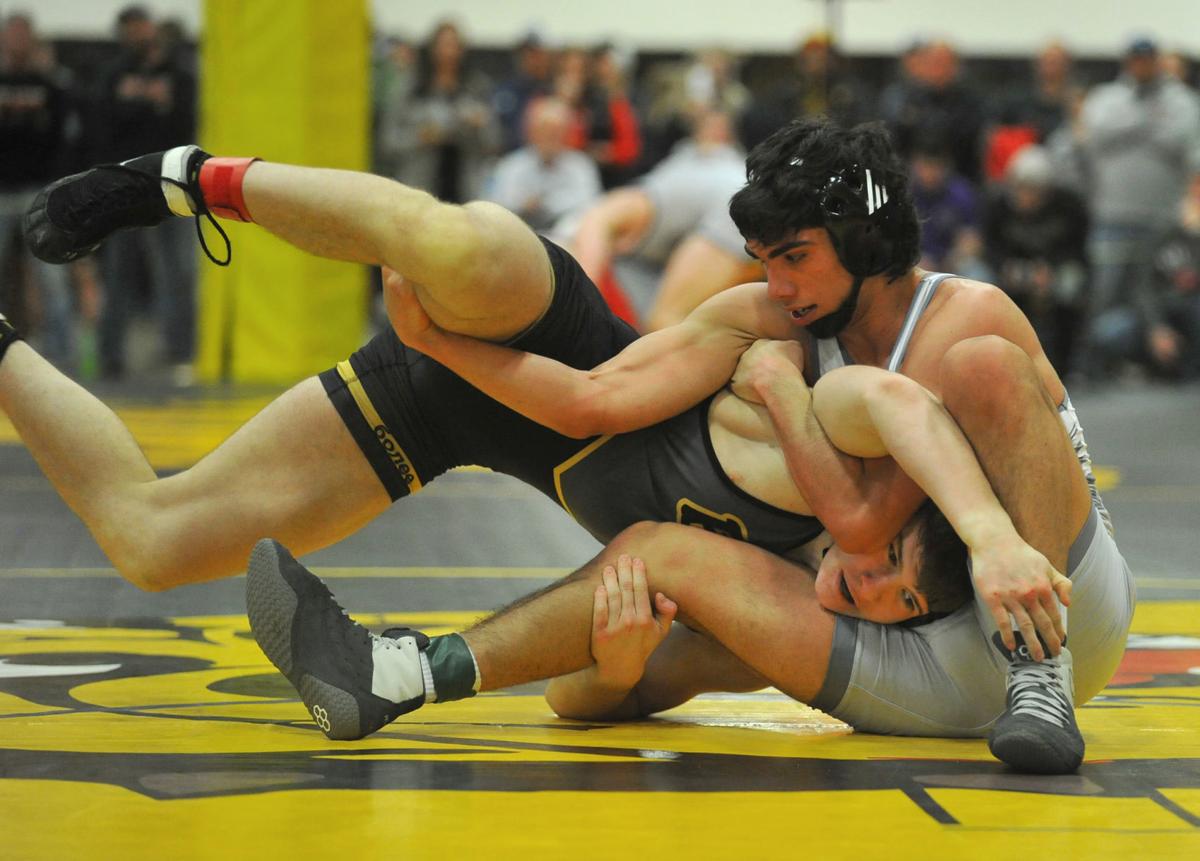 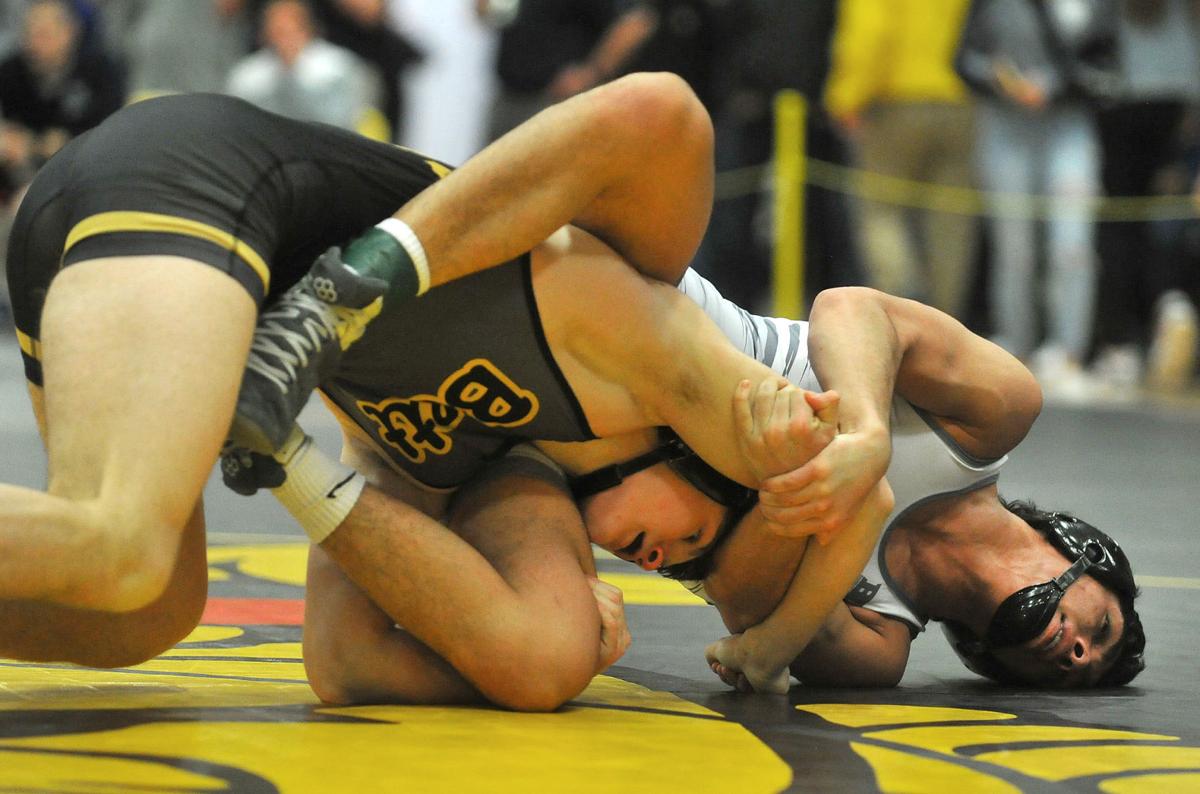 BETTENDORF — The Muscatine Muskie wrestling team will have four members competing at the Class 3A state meet at Wells Fargo Arena in Des Moines on Thursday.

Crabtree (38-14) won by a 12-2 major decision over Fort Madison's Gage Roberts. The Muskie sophomore then got by Sam West of West Burlington-Notre Dame by a 3-0 decision before losing in the 126-pound title match to Aiden Evans of Bettendorf, who won via pin at the 2:18 mark.

Castillo (39-10) made his way to the 160-pound district championship match by 16-1 technical fall over Nathan Steffensmeier of Fort Madison in the second round after Castillo received a bye in the opening round. Castillo, a senior, then was narrowly on the losing end of a 6-4 decision to Bettendorf's Keano Roberts in the title match to finish in second.

Nimely (40-8), like Castillo, opened with a bye in the first round. The junior then went on to pin Julian Perez-Hall of Fort Madison in 1:17. However, Bettendorf's Bradley Hill would take a 12-10 decision in extra time to beat Nimely in the 170-pound district championship match. Nimely responded with a win in the wrestleback to advance .

Deseh (24-5) almost went the distance in his first match against Charles Burrows of Clinton, but got the pin of Burrows with 45 seconds remaining in the match. Deseh then won a 3-2 decision over Fort Madison's Danen Settles to reach the heavyweight finals, where the Muskie junior lost to Bettendorf's Griffin Liddle.

West Liberty gets four to state meet: The Comets will take two undefeated wrestlers to the Class 2A state meet in Will Esmoil and Kobe Simon.

Esmoil (38-0), the 152-pound senior, pinned his way through the Class 2A District 8 meet in Washington on Saturday. First, Esmoil took care of Payton Cline in 1:14 before capturing first place with a pin of Zeb Gnida of Solon in 3:12 to reserve his place at state.

Simon (34-0) pinned Solon's Erich Karsten in under a minute to open, then went on to record a 7-2 decision over Seth Adrian of Davenport Assumption in the 220-pound district title bout.

Alex Beaver (29-7) and Talen Dengler (31-8) both moved on via second-place finishes. Beaver competes at the 113-pound weight class while Dengler wrestles at 138.

Columbus/Winfield-Mount Union sophomore Lane Scorpil will likewise be wrestling at state after he took first at 106.

Scorpil (33-0) received a forfeit in the first round and then pinned Derrick Bass of Davenport Assumption as time expired in the first period to not only keep his undefeated mark intact. It was his second pin over Bass in two weeks.

Davenport Assumption led all the team scores at the Class 2A District 8 meet in Washington with 137.5 points. Solon placed second with 99 and West Liberty came in third with 66.5. Columbus/Winfield-Mount Union scored 28 points to finish in eighth.

Comets with convincing victory against Golden Hawks: West Liberty was six or more points better than Mid-Prairie in every quarter on Saturday to turn in an eventual 66-39 winner.

Wilton advances with big win over Columbus: The Beavers rode an early lead to dominating 66-26 win over the Wildcats in Columbus on Saturday.

The Beavers grabbed a 21-6 advantage after one quarter of play and went on to score 22 and 15 points in the second and third before putting up six in the fourth to ride out the clock. Wilton didn't allow Columbus to score double-digit points in any quarter of play.

Durant dispatches North Cedar to move on: The Wildcats outscored the Knights 36-20 in the middle two quarters en route to a 55-40 win for the right to keep playing.

Durant (6-16) held a three-point lead after the first period, but went to work in periods two and three to stake its advantage. The Wildcats were outscored by two in the fourth, but by then their lead was plenty safe.

With the win, Durant moves on to play Iowa City Regina (14-7) Tuesday night at Regina.

With a global health crisis transpiring, taking stock of one’s health is a daily requirement. For me, that also means reflecting back on the h…

Comets' Esmoil commits to be two-sport athlete at Coe College

West Liberty's Will Esmoil took his time choosing a college.

Long provided stability for Muskies in season of uncertainty

The Muscatine girls basketball team came into the season with plenty of question marks.

West Liberty's Jimena Fierro-Perez has decided that her next stop will be Dubuque's Loras College. The school's cross country Twitter page sen…

Muscatine will compete in Class 4A Group 7 during the 2020 prep football season. Members of their group include Bettendorf, Cedar Rapids Kenne…

Long provided stability for Muskies in season of uncertainty

The Muscatine girls basketball team came into the season with plenty of question marks.