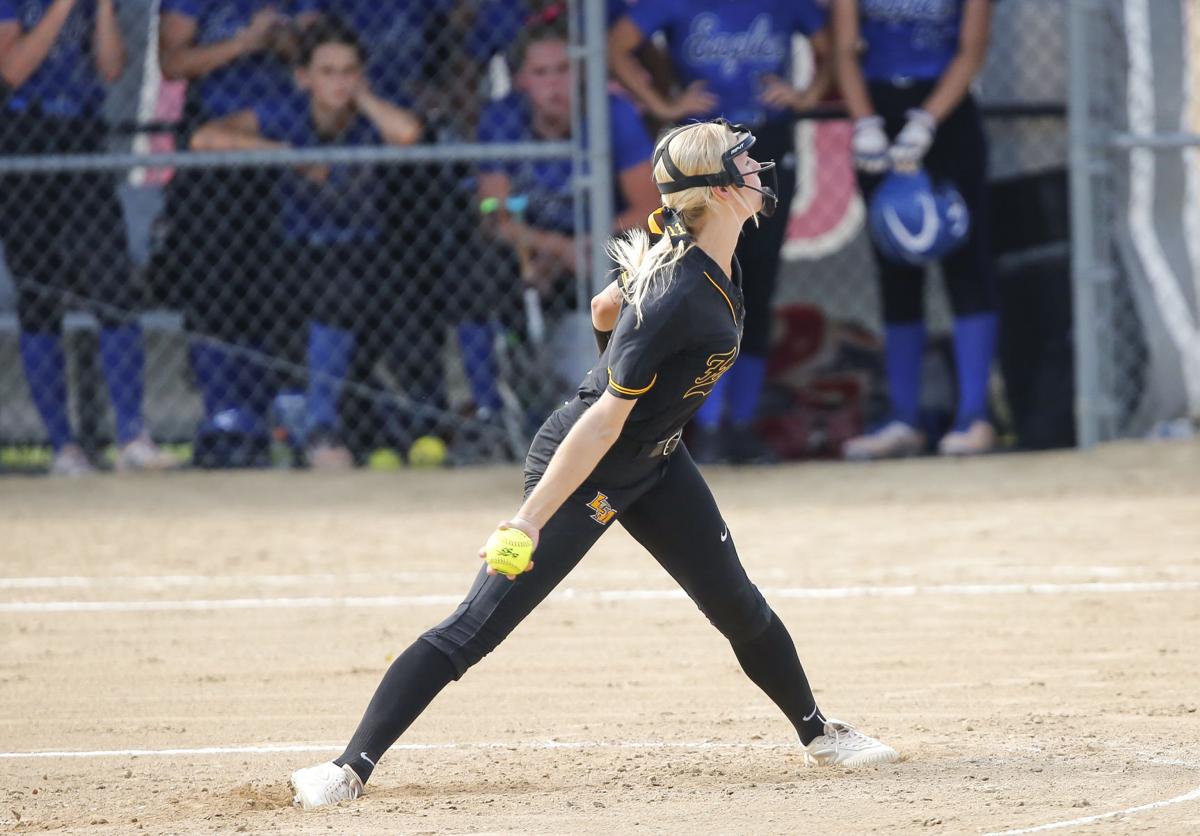 Louisa-Muscatine senior Hailey Sanders delivers a pitch against Underwood Tuesday during the quarterfinal round of the State Softball Tournament at the Harlan and Hazel Rogers Sports Complex in Fort Dodge. 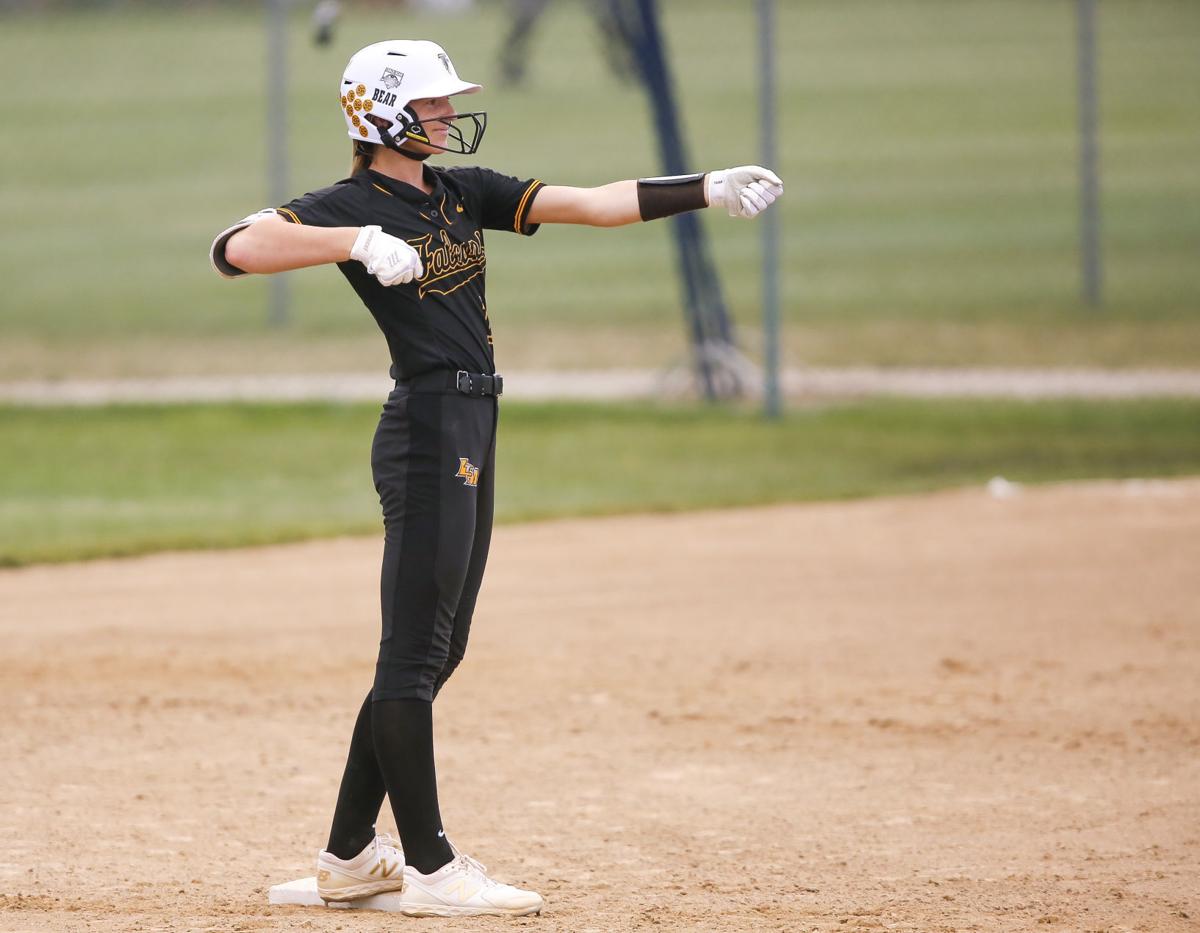 Louisa-Muscatine junior Kylee Sanders celebrates at second base after hitting a double against Underwood Tuesday during the quarterfinal round of the State Softball Tournament at the Harlan and Hazel Rogers Sports Complex in Fort Dodge. 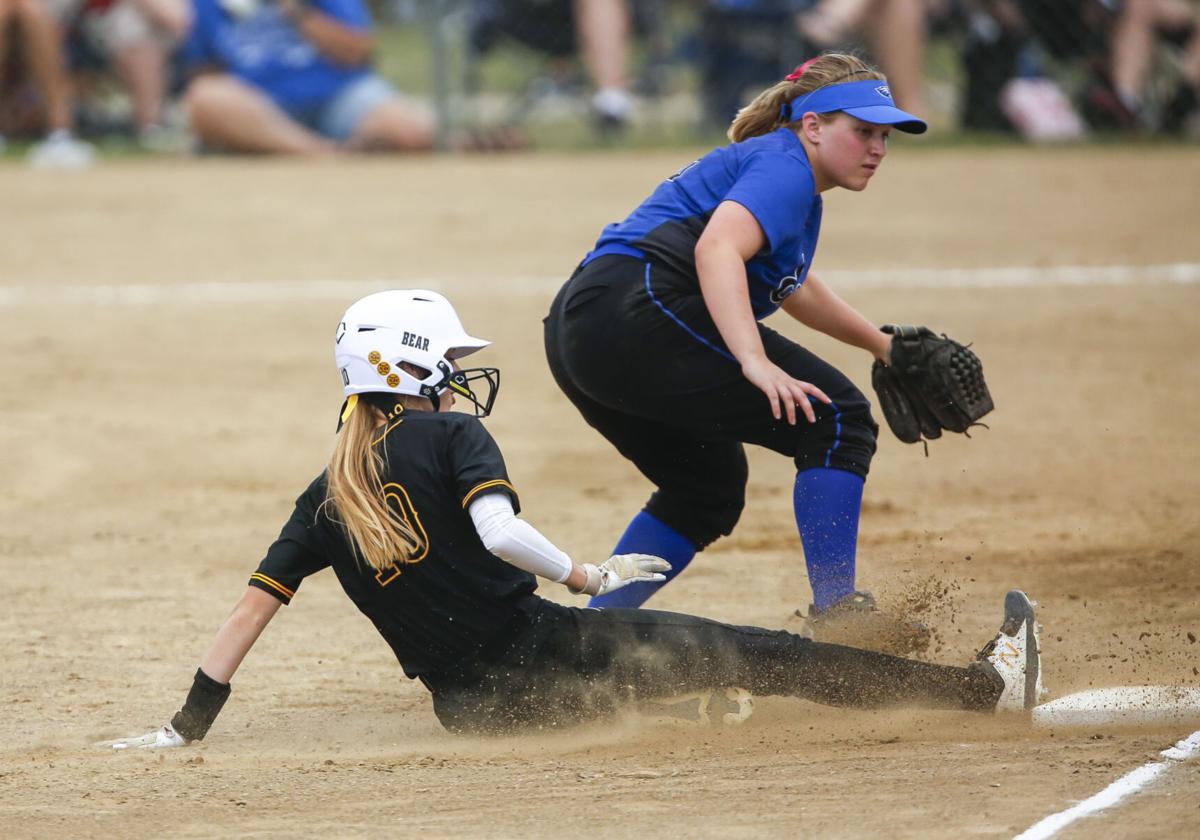 Louisa-Muscatine freshman Emilee Salek slides safely into third base against Underwood Tuesday during the quarterfinal round of the State Softball Tournament at the Harlan and Hazel Rogers Sports Complex in Fort Dodge.

FORT DODGE, Iowa — Louisa-Muscatine pitcher Hailey Sanders was an out away from a seven-inning no-hitter against Underwood in Tuesday’s Class 2A quarterfinal at the Harlan Rogers Sports Complex in Fort Dodge.

Although the no-hitter wasn’t meant to be, the second-seeded Falcons took care of business and advanced to the semifinals on the back of a 6-1 win over the seventh-seed Eagles.

The only hit for Underwood came on a high and deep home run by junior Maddie Pierce. Besides that, the senior allowed a lone walk to Ella Pierce. The highly decorated L-M pitcher struck out a dozen in the win for the Falcons.

Players on L-M admit they were rooting for the no-hitter to come to fruition but are nonetheless happy to be moving on, as they have the previous two years at the state tournament.

“We were all really bummed when (the walk and the home run) happened,” L-M junior Mallory Mashek said. “Hailey still pitched a great game.”

Offensively, Louisa-Muscatine received production from throughout its lineup.

The top three hitters in the L-M lineup (Kylee Sanders, McKenna Hohenadel and Hailey Sanders) each had two of the Falcons' 10 hits, and combined for two RBIs and three runs scored.

Cleanup hitter Brynn Jeamby was 1-for-3 but was the only Falcon hitter to drive in multiple runs, getting RBIs in both of her final two at-bats. The first came in the bottom of the fourth. With one out, Jeamby roped a screaming line drive right back off of the leg of Underwood’s pitcher, Ella Pierce.

The Eagle junior starting pitcher would take another shot off the the other leg when junior Kylee Sanders replicated Jeamby's hit. The Underwood pitcher stayed down after both but remained in the game and pitched all six innings for the Eagles.

“I felt really bad for her,” Kylee Sanders said. “But we make really good contact and there’s nothing you can really do about it.”

Freshman McKenzie Kissel, hitting in the number nine spot in head coach Bryan Butler’s lineup, got the Falcons (19-5) started in the bottom of the second with an RBI base knock down the third base line that scored Mae Cox.

“(McKenzie) has been doing an outstanding job at the plate,” Butler said. “Having her the (designated player hitting ninth), it’s just like having a second leadoff hitter. If she gets on and Kylee comes up, it’s the perfect setup for us.”

Cox reached on an error a few batters prior. A bad Underwood (14-5) throw allowed Cox to advance to second and she made her way to third on a passed ball before Kissel allowed her to touch home for the first L-M run.

Though the Falcons got two hits in their half of the first, they were unable to put a run across. Falcon hitters seemingly intensified the pressure on Ella Pierce with each plate appearance.

“I really don’t like to coach them when they’re in the box,” Butler said. “It’s not a good approach for a coach. … We’ll talk in the dugout about things we see, and the players are really good about communicating with each other about the pitcher’s tendencies, what they’re seeing and what the strike zone is. They do a lot of talking. I hesitate to do much while they’re hitting other than ‘See ball, hit ball.’”

“We learn every time, every at-bat,” said Mashek. “Every time, we tell the person on deck, we tell the whole dugout, and we learn where pitches are going and stuff like that.”

The Eagle pitcher presented the Falcons with a bit of a different look, but L-M adjusted.

“I feel like we were all super early. (Ella Pierce) had good movement, a good drop ball,” Hailey Sanders said. "After the first couple innings, we just had to get our timing down. Once we got through our lineup once, that’s when we really got everything down.”

“My timing is the biggest thing,” Kylee Sanders said. “We just made our adjustments and jumped on her for runs when we could.”

Outside of the first, L-M went down scoreless in one other inning.

Louisa-Muscatine will play third-seeded Ogden (20-3) on Wednesday at 3:30 p.m. in the semifinals.

“The defense made some great plays today,” Butler said. “That’s what I like to see. Our defense got work in and they were sharp. It’s nice to see that. To me, that’s attributed to the schedule we had at the end of the season.

"We’re were getting a lot of balls hit our way and took some losses. But the kids get up here and they’re confident — not cocky, but confident. They understand their role.”

At stake: Winner advances to Friday's 5 p.m. championship against No. 1 North Linn or No. 4 Northeast.

Need to know: Loecker, an Iowa recruit, is ranked among the top 100 prospects in the country by Extra Innings Softball for the 2020 class. She was walked four times in Tuesday's quarterfinal win over Mount Ayr. Ogden didn't play a regional final as East Marshall was forced to forfeit because of a positive COVID-19 test. L-M is seeking to make a championship game for the third straight year. Neither team has lost to a 2A school this year.

Louisa-Muscatine senior Hailey Sanders delivers a pitch against Underwood Tuesday during the quarterfinal round of the State Softball Tournament at the Harlan and Hazel Rogers Sports Complex in Fort Dodge.

Louisa-Muscatine junior Kylee Sanders celebrates at second base after hitting a double against Underwood Tuesday during the quarterfinal round of the State Softball Tournament at the Harlan and Hazel Rogers Sports Complex in Fort Dodge.

Louisa-Muscatine freshman Emilee Salek slides safely into third base against Underwood Tuesday during the quarterfinal round of the State Softball Tournament at the Harlan and Hazel Rogers Sports Complex in Fort Dodge.