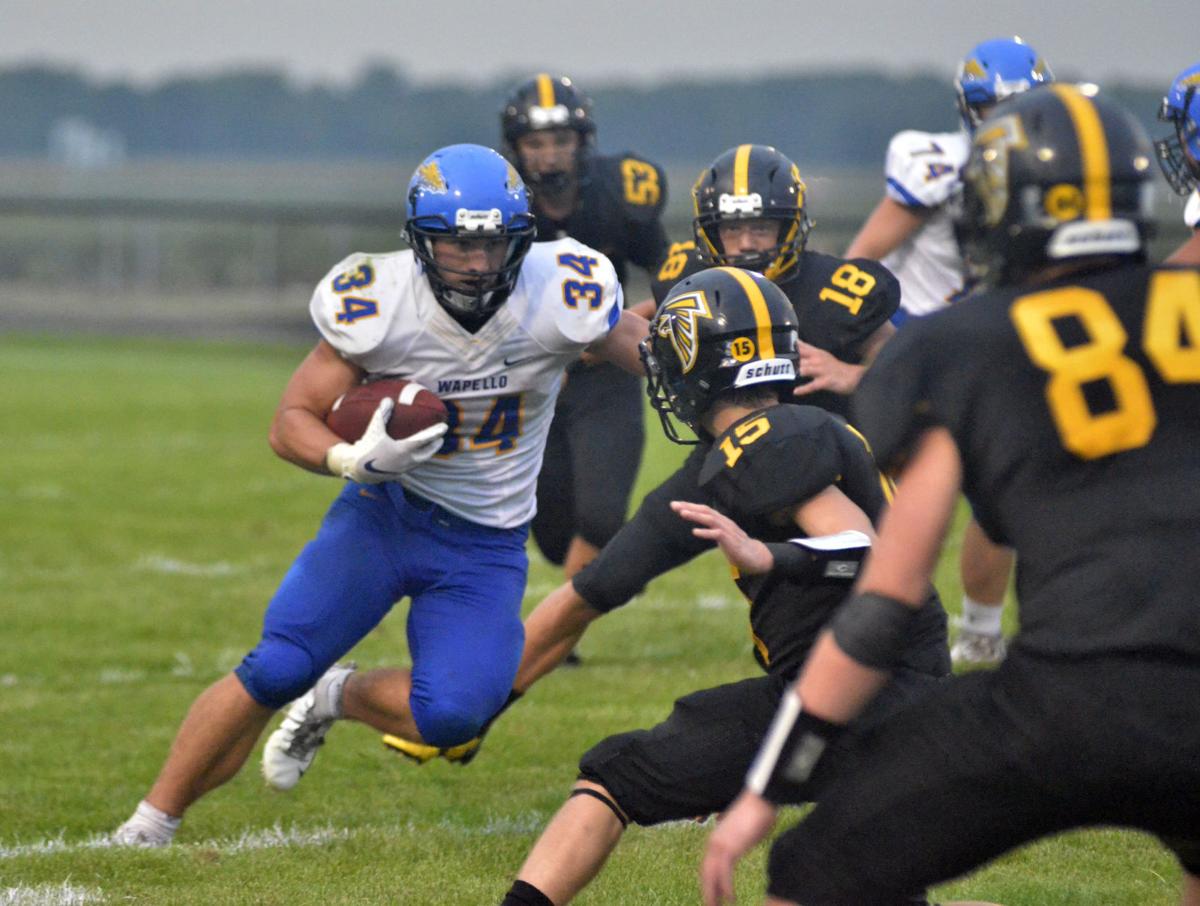 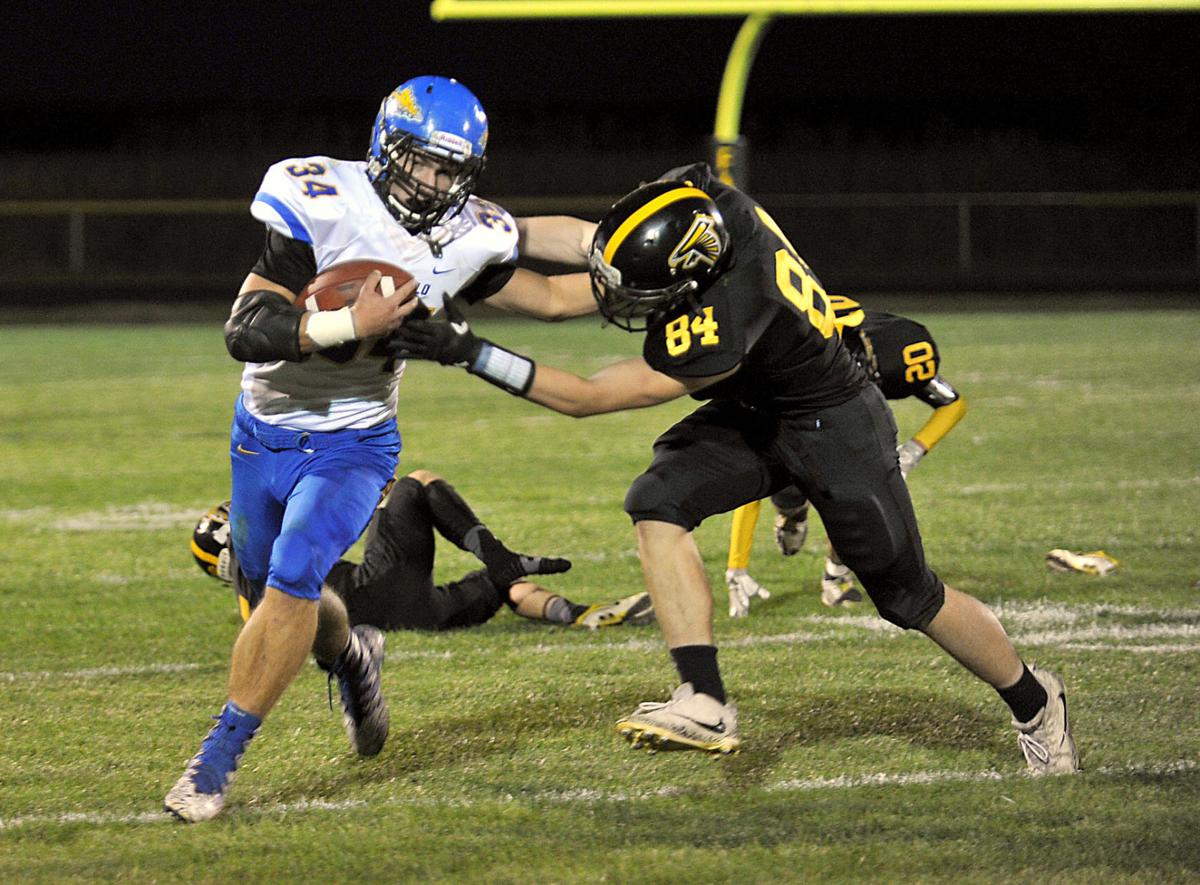 Wapello's Ricky Pforts tries to elude Louisa-Muscatine's Brock Jeambey during a game last season. Pforts is one of several skilled position players returning for the Indians.

WAPELLO, Iowa — Ricky Pforts is the kind of player that changes a program.

For the last four years, Pforts has been an absolute menace for opposing football teams.

He’s also perhaps about to become annoying to a whole group of Wapello underclassmen because Pforts is the type of player that will get his name in the paper long after his days in an Indian uniform. Sentences about the school’s team will include phrases like “after the graduation of Ricky Pforts ....”

But that’s a small price to pay in order to have a player with as big a talent as Pforts take up space in a small school’s record book, where the senior’s name appears plenty of times, for accomplishments such most touchdowns in a career (43) and most career rushing yards (3,609 on 561 carries).

Admiration is a two-way street in this case. Pforts appreciates all Wapello has provided him along the way. He’s also looking forward to seeing what comes in the way of success for Wapello in the future.

“(I think) we’re one of the better programs considering how small we are,” Pforts said, “and I think it’s going to keep going with the classes we have coming up. I’m really proud to have played for Wapello.

“It’s nice to know that I can be a good role model for some of the kids.”

That mentality may come from Pforts' early experiences on varsity when he was the one needing some guidance. However, Pforts was more productive on varsity in those early days than an ordinary freshman.

In his first year, Pforts' main duty was to back up his older brother, Rogan.

Still, the younger Pforts contributed 89 yards on just 10 carries and a touchdown while also recording 34 tackles, which was good for third on the team.

While modest compared to the production he would go on to have, those early days set the tone for what would become one of the more accomplished careers in Wapello football history.

“It’s definitely cool that I set some records in the past two to three years that I’ve been playing," Pforts said. "That’s definitely something I can hang on to. And all the friendships I’ve made over the four years, that brotherly bond, I’ll hold onto that for the rest of my life.”

"Ricky is not only an outstanding football player but an even better person," said Parson. "He is a very high character kid who is everything you could ask for as a student/athlete. He is a great kid, with a great attitude and work ethic, and is someone you can count on to give his best effort at all times."

Not only did Pforts follow in his brother's footsteps into football, but his father's and grandfather's as well. All of them donned a Wapello uniform in some form along the way.

Being a part of that lineage is what puts things into perspective for Pforts, in terms of looking out for the next generation and in appreciating the time he had playing for Wapello.

“It’s definitely one of the best feelings ever to be a role model for the kids coming up and give them some motivation and something to look forward to," said Pforts. "(It's) motivation for them to better themselves in life and as a football player (and) help make the program better."

Time remains on Gary Barta’s side.

Mississippi Athletic Conference officials announced Wednesday it will play varsity level only competition this summer for baseball and softball.

The John Deere Classic is another regional event to be lost due to COVID-19 restrictions.

Amid much uncertainty, high school sports finally have a definitive return date.

NEW YORK (AP) — Major League Baseball players ignored claims by clubs that they need to take additional pay cuts, instead proposing they receive a far higher percentage of salaries and commit to a longer schedule as part of a counteroffer to start the coronavirus-delayed season.

Wapello's Ricky Pforts tries to elude Louisa-Muscatine's Brock Jeambey during a game last season. Pforts is one of several skilled position players returning for the Indians.