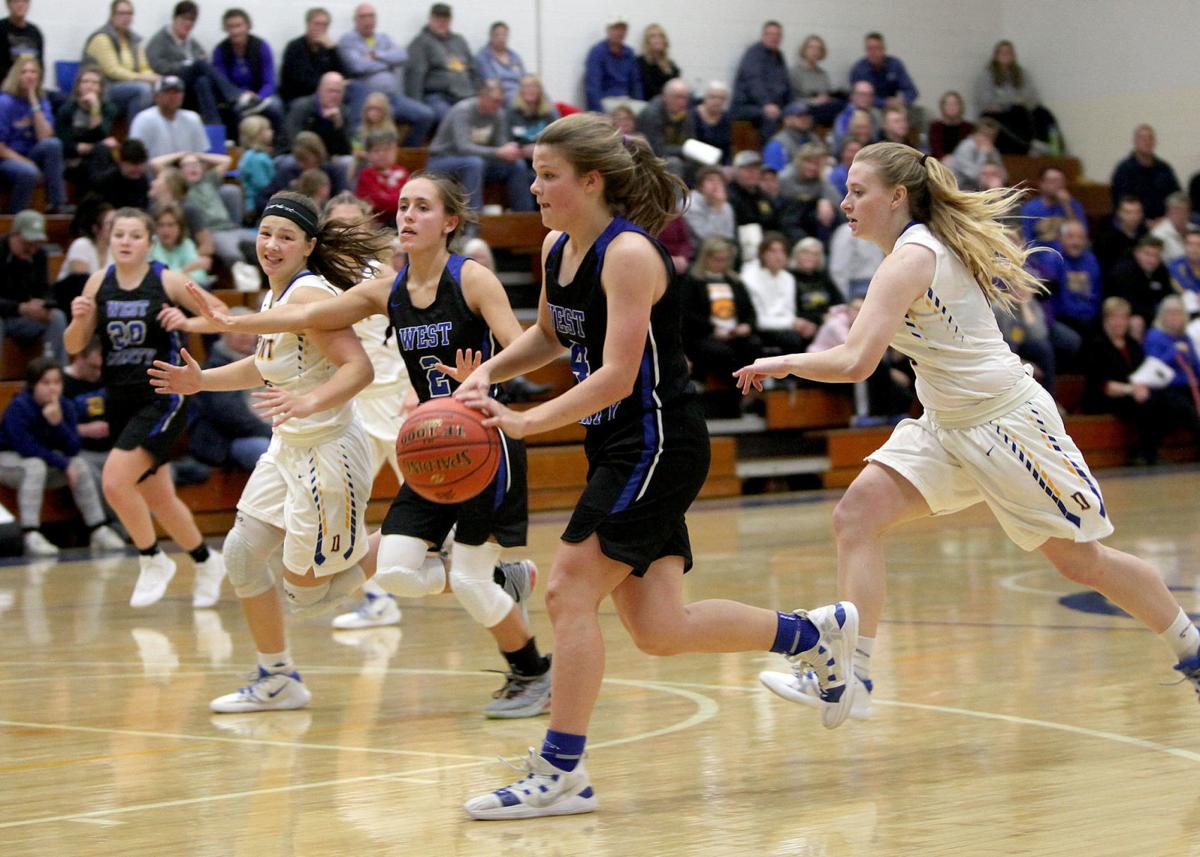 Finley Hall of West Liberty dribbles past defenders against Durant on Dec. 6, 2019, in Durant. 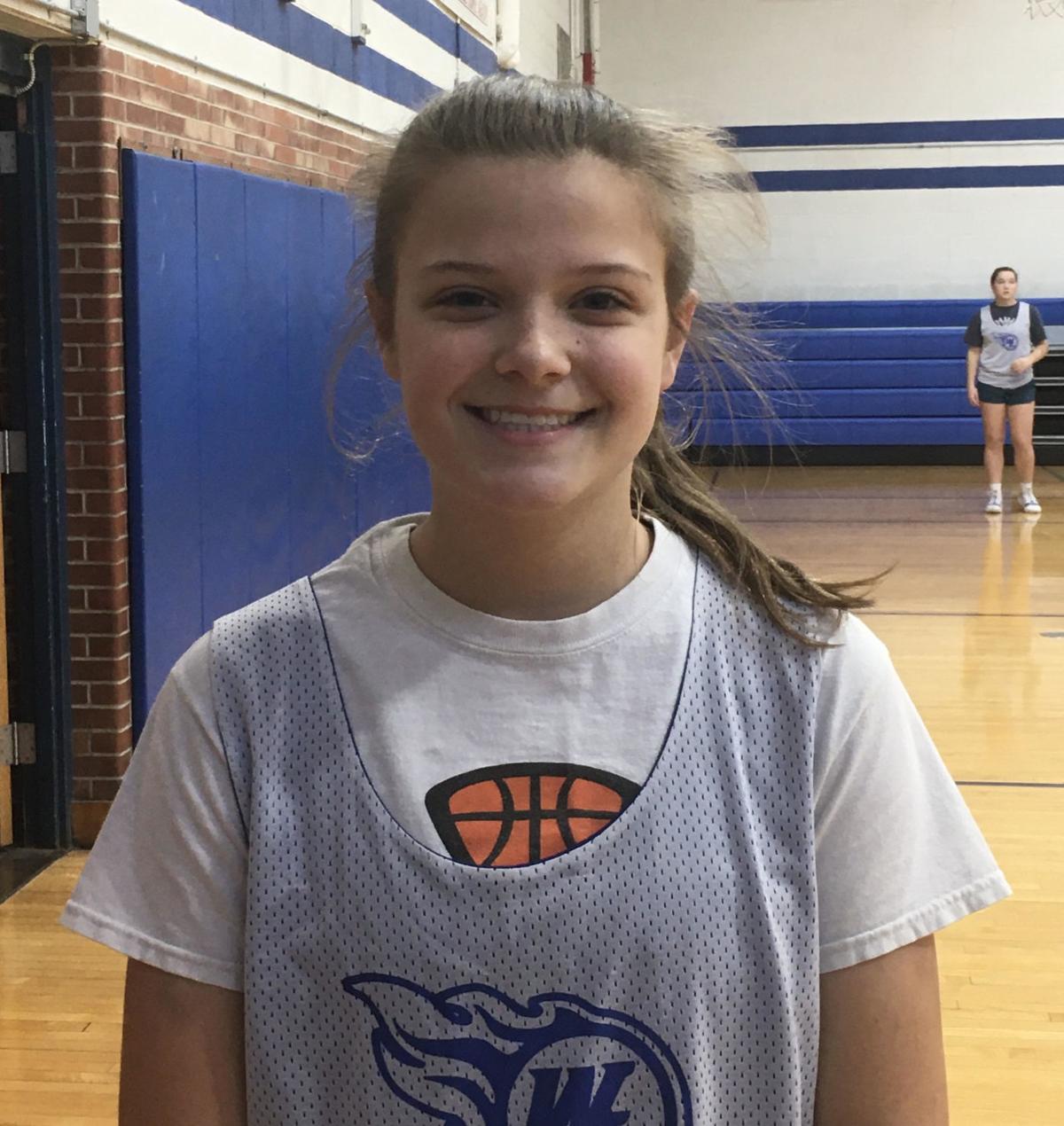 WEST LIBERTY, Iowa — The most exciting successes are often the ones that are least expected.

If that holds up, the West Liberty girls basketball team must be ecstatic about Finley Hall’s early-season performances.

Coming into the season, neither Hall nor the Comet coaching staff even expected the freshman to be on the varsity roster, let alone leading them in scoring three games into the year.

When asked if this was something on his radar coming in, first-year head coach Matt Hoeppner shook his head.

“Not even a little bit,” Hoeppner said, “As a matter of fact, when we came into the season, we thought, 'Well, we’ll play her on JV and see where it goes’ and then (Finley) had a pretty decent game during our scrimmage so we went ahead and took her off JV and said, 'Let’s get her to varsity and be healthy at that level’ and she took over.

“Expectations for her were low. We didn’t want to put any pressure on freshman if we didn’t have to, but she definitely responded and has taken on a pretty good role for our team.”

But Hall didn’t waste any time making her presence known as she put up 23 points in the season opener along with seven rebounds, three assists and two steals.

“I just kind of went into this season thinking that I’d just be there,” Hall said, “I don’t know how to explain it, I just wanted to be on the team and playing with the girls, not really having much of an impact, just helping as a sub, that’s about it.”

Hall hasn’t started a game for West Liberty yet this season. But she’s become a vital asset to the Comets, who sit at 3-0 and are coming off a 38-28 win over Class 3A 10th-ranked Monticello on Tuesday night.

Although the freshman’s scoring output has dropped after the first game of the season, opponents have taken notice of Hall. It has opened up opportunities for others.

Perhaps not so coincidentally, the Comets have had a different leading scorer in each of their three games thus far.

Finley’s sister, sophomore Sailor Hall, led West Liberty with 17 points in the win against Monticello. In their dominant 60-27 win over Durant, it was sophomore Macy Daufeldt who paced the Comet attack with 17.

But through three games, Finley Hall is the team's leading scorer, averaging 15 points per game. Sailor Hall and Daufeldt each come in with 11 per contest after that.

The younger Hall also has added 15 rebounds and a team-leading eight assists.

“The team shares the ball really well,” Hall said. “We have really good team chemistry. The upperclassmen have been so accepting. They welcomed me right into the group.”

She credits her teammates for creating an environment for which to succeed, one that even dates back to last softball season where she hit second in a lineup that ended up taking third place at the Class 3A state tournament.

That all happened before Hall had even become enrolled in high school.

Furthermore, since the Comets see so much overlap among their athletics, Hall and Hoeppner believe they have a leg up on the competition because they have some measure of built-in familiarity with one another that carries over from sport to sport.

And it’s calcified by the amount of success they’ve had as a group.

“For Finley, a lot goes back to being a part of that state softball team,”  Hoeppner said. “I don’t know if she’s here if she wasn’t starting at third base for our third-place softball team. Now she’s already been there and done that and now she can work that experience over into this.”

That success has produced a drive for more in West Liberty, a mindset that has enveloped not only their teams but for Hall as well.

“It just feels nice to be on a team that’s winning,” Hall said, “I’m really competitive.”

Finley Hall of West Liberty dribbles past defenders against Durant on Dec. 6, 2019, in Durant.