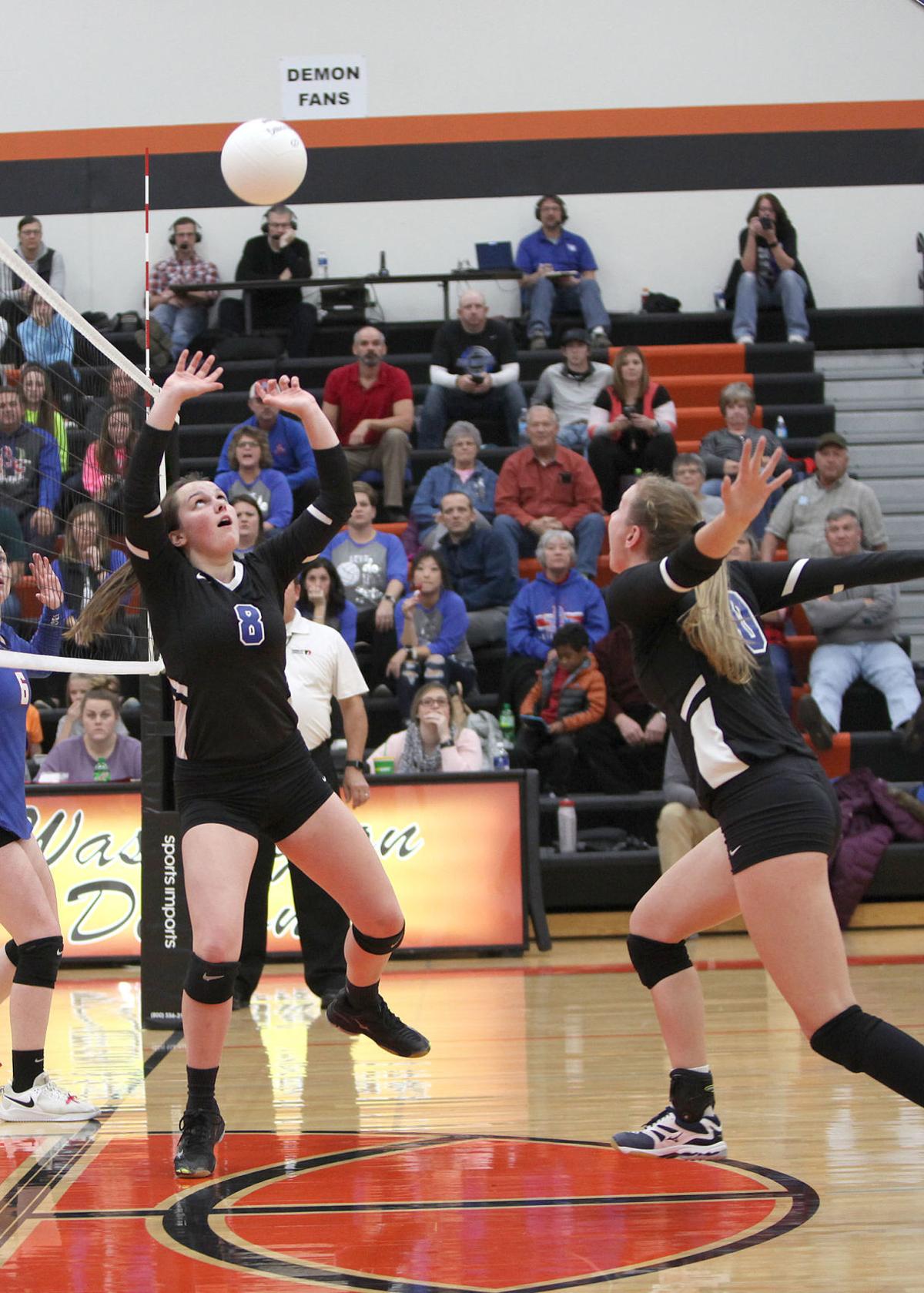 West Liberty's Morgan Peterson sets the ball to teammate Martha Pace during their regional final against Albia. West Liberty won in a three-game sweep, earning a trip to the state volleyball tournament. 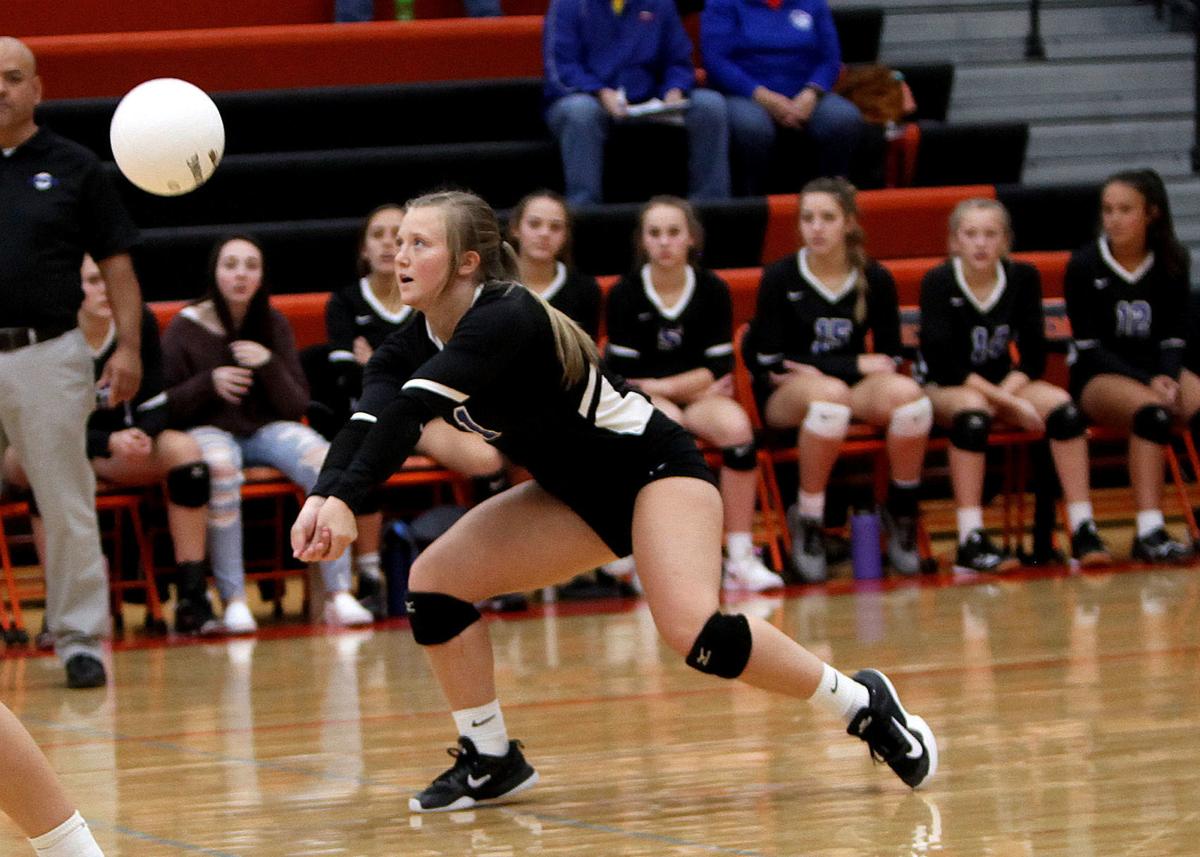 Karsyn Ruess passes the ball during the first game of Monday's regional final against Albia.

WASHINGTON, Iowa — The West Liberty volleyball team has believed all season they are a state-caliber team. Monday night validated those feelings.

The Comets ended the regular season ranked fifth in Class 3A and looked every bit the part against Albia.

Albia came into the Class 3A regional final looking like a formidable foe for the Comets. Like West Liberty, the Lady Dees came in with sky-high expectations and a powerful group led on the front line, with Abbey Griffin ready to match hits with Macy Daufeldt, Martha Pace, Averi Goodale and the rest of the West Liberty lineup.

“I’m really grateful for (our) hitters,” Peterson said. "They open things up for us and allow us to run a lot of quick plays.”

West Liberty (31-7) had Albia (29-10) on its toes all night. From masterful serves to big finishes, the Comets never let their opponents find their footing.

Early on, however, it appeared as if the match might be closer than it turned out to be.

“We were a little unorganized at times,” said West Liberty head coach Ruben Galvan. “I think (Albia’s) hitters got to them a little bit, but they settled down and they dominated the third game.”

After a Comet serve went into the net in the first set and the Lady Dees scored on a Griffin kill, West Liberty led just 12-10. However, the Comets went on the first of several long scoring runs throughout the night, highlighted by a Karsyn Ruess ace to make it 17-12, which West Liberty used to catapult to a one-game lead.

The second set not only repeated the same score but took a similar path to get there, as well. Albia pulled to within 11-9 in the second, only to be outscored 14-7 from that point on. By the time the Lady Dees scored their 14th point of the half, they were down 10.

During the second set, Daufeldt had nine of her game-high 18 kills, a block, several digs (of which she ended with 17) and an ace. Many of the kills were assisted by Morgan Peterson, who finished with 32 of them to lead all players. Martha Pace was second behind Daufeldt in kills with 13.

Though opponents always have to account for the presence of Daufeldt and Pace, the third set belonged to Monica Morales.

When the West Liberty freshman took serve, it was a 9-6 game. It would be 16-7 before Albia regained service, and within that span Morales registered three of her five aces for the night.

“That was an amazing feeling,” Morales said. “It was really fun … and it’s going to keep pushing us and pushing us.”

“It was unreal and exciting all at the same time,” said Peterson. “This shows that we can play anybody.”

It was also during Morales’ time serving that the feeling West Liberty’s date to the state tournament was inevitable. It started with the Comet student section and worked its way through the West Liberty crowd and team. Albia would only manage two more points from that point on as the night ended with the Comets celebrating.

“(Going to state) is going to be a new experience for those kids,” said Galvan. “We just have to prepare mentally - one game at a time - and hopefully we can make a run at it.”

West Liberty's Morgan Peterson sets the ball to teammate Martha Pace during their regional final against Albia. West Liberty won in a three-game sweep, earning a trip to the state volleyball tournament.

Karsyn Ruess passes the ball during the first game of Monday's regional final against Albia.