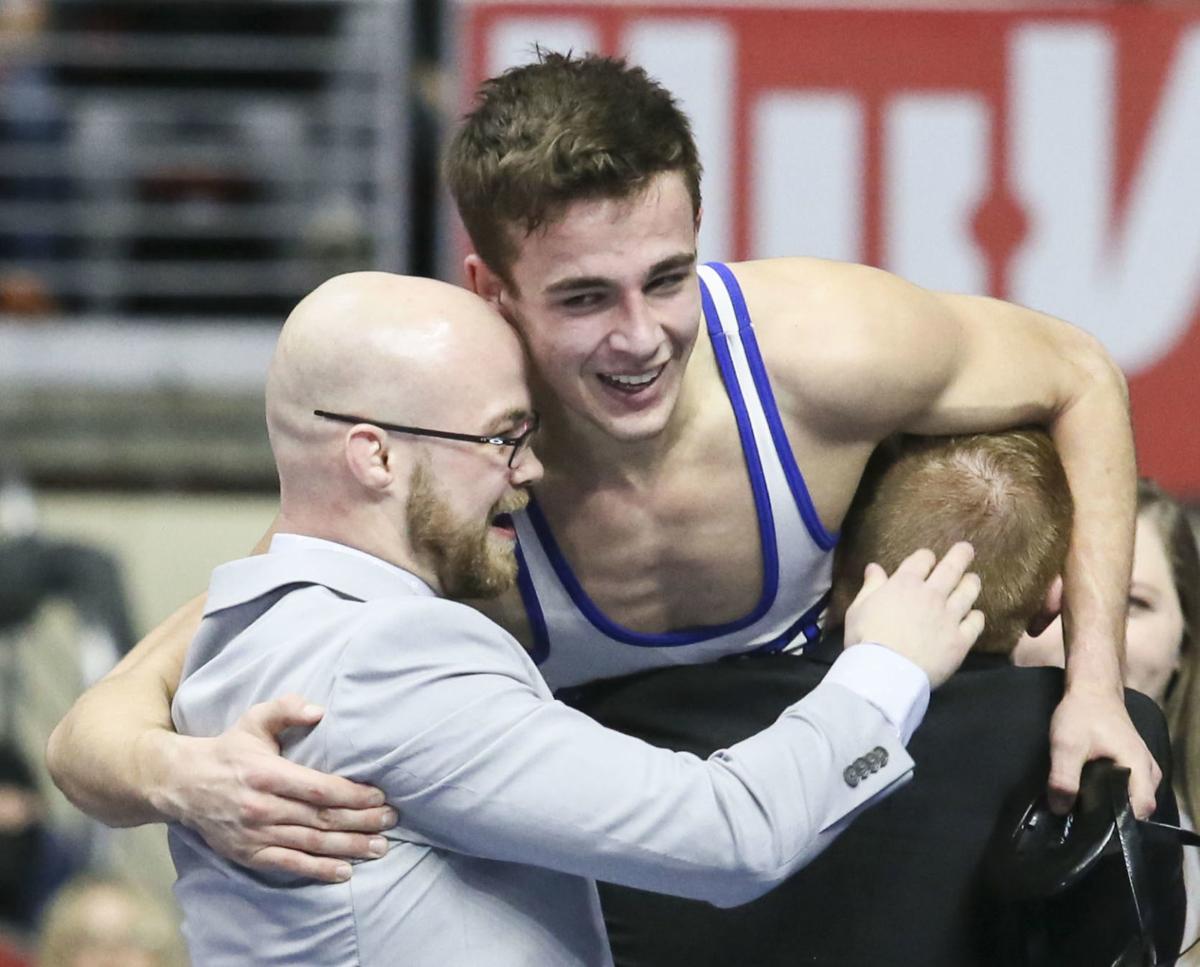 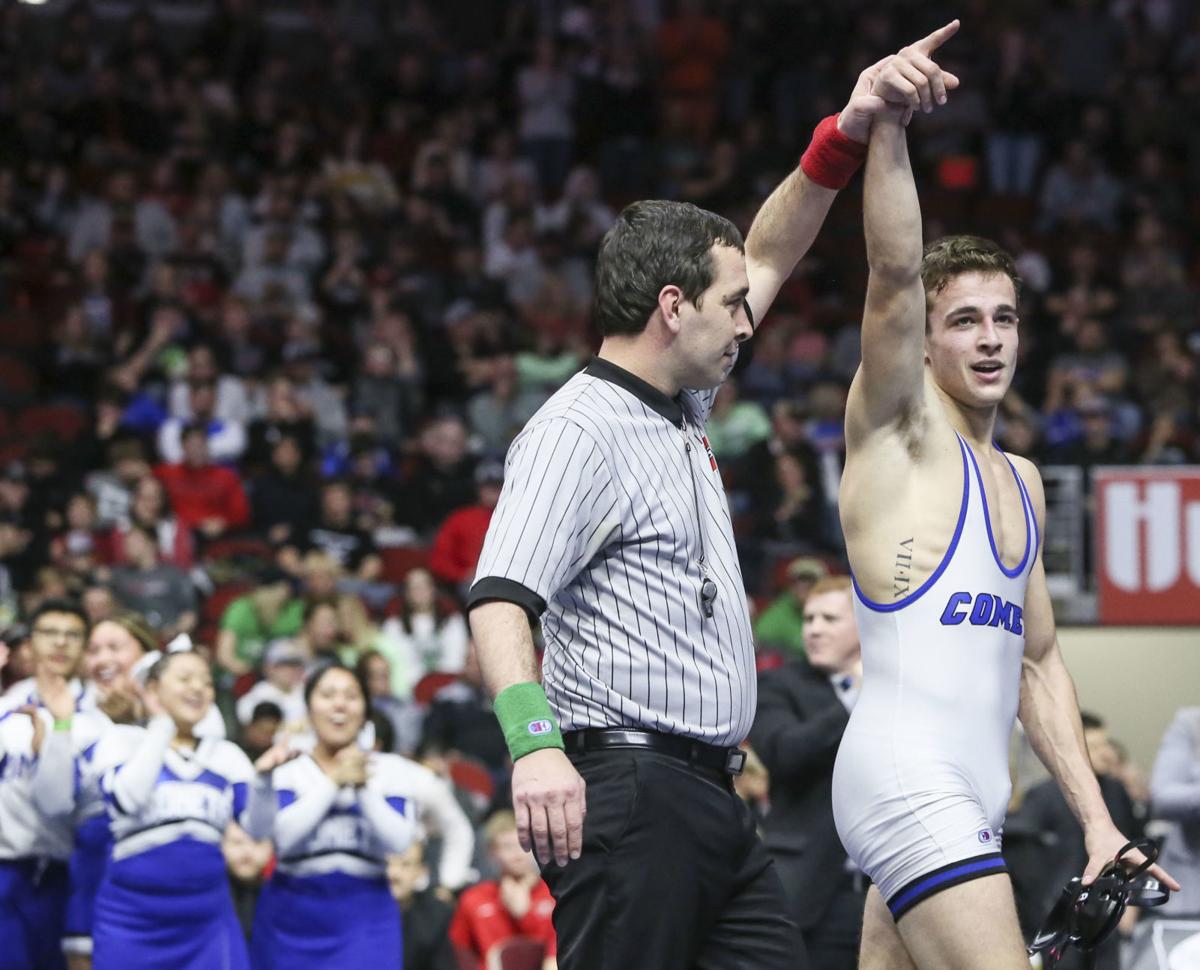 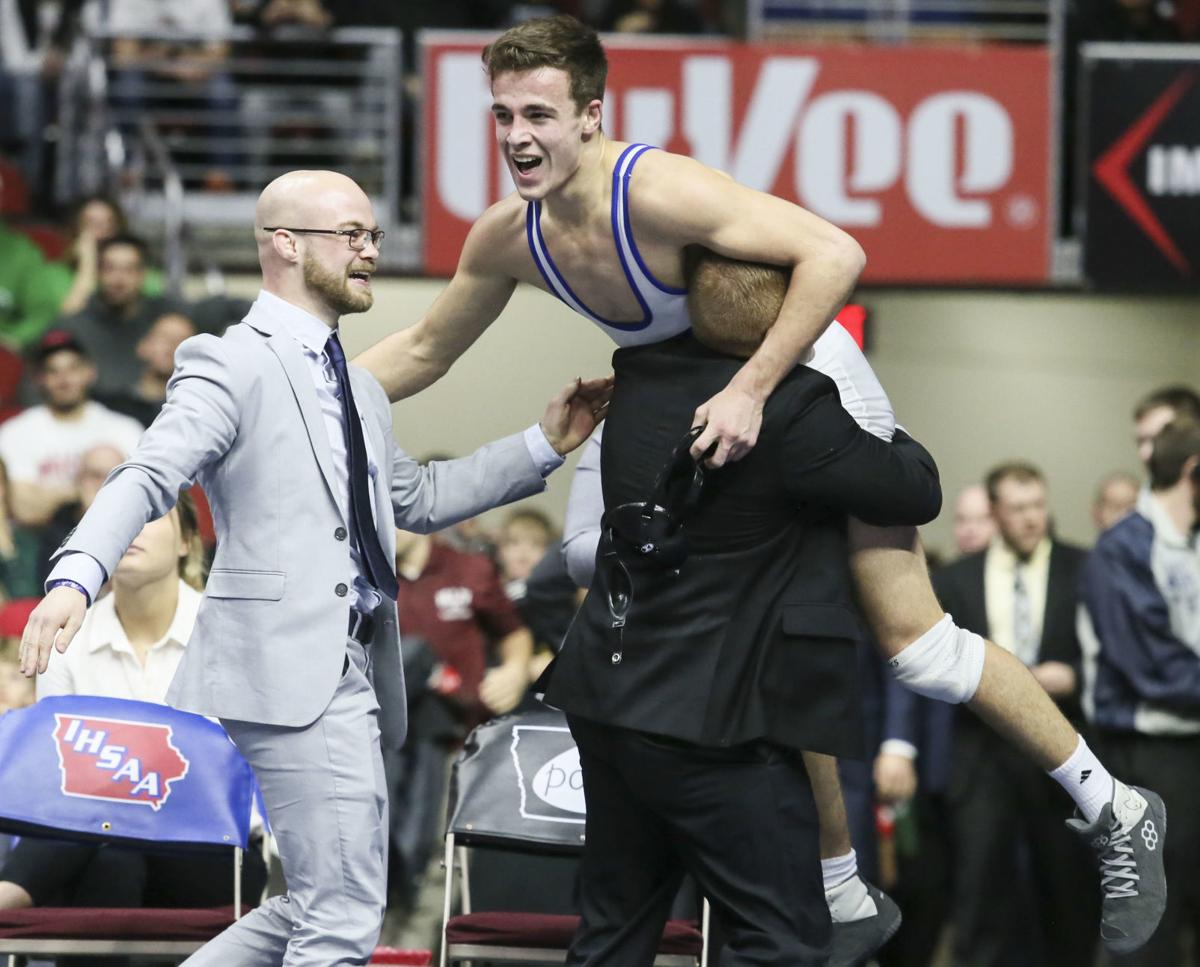 West Libery’s Will Esmoil celebrates with his coaches after pulling out a 3-2 victory in the 152-pound championship Saturday night in Des Moines. 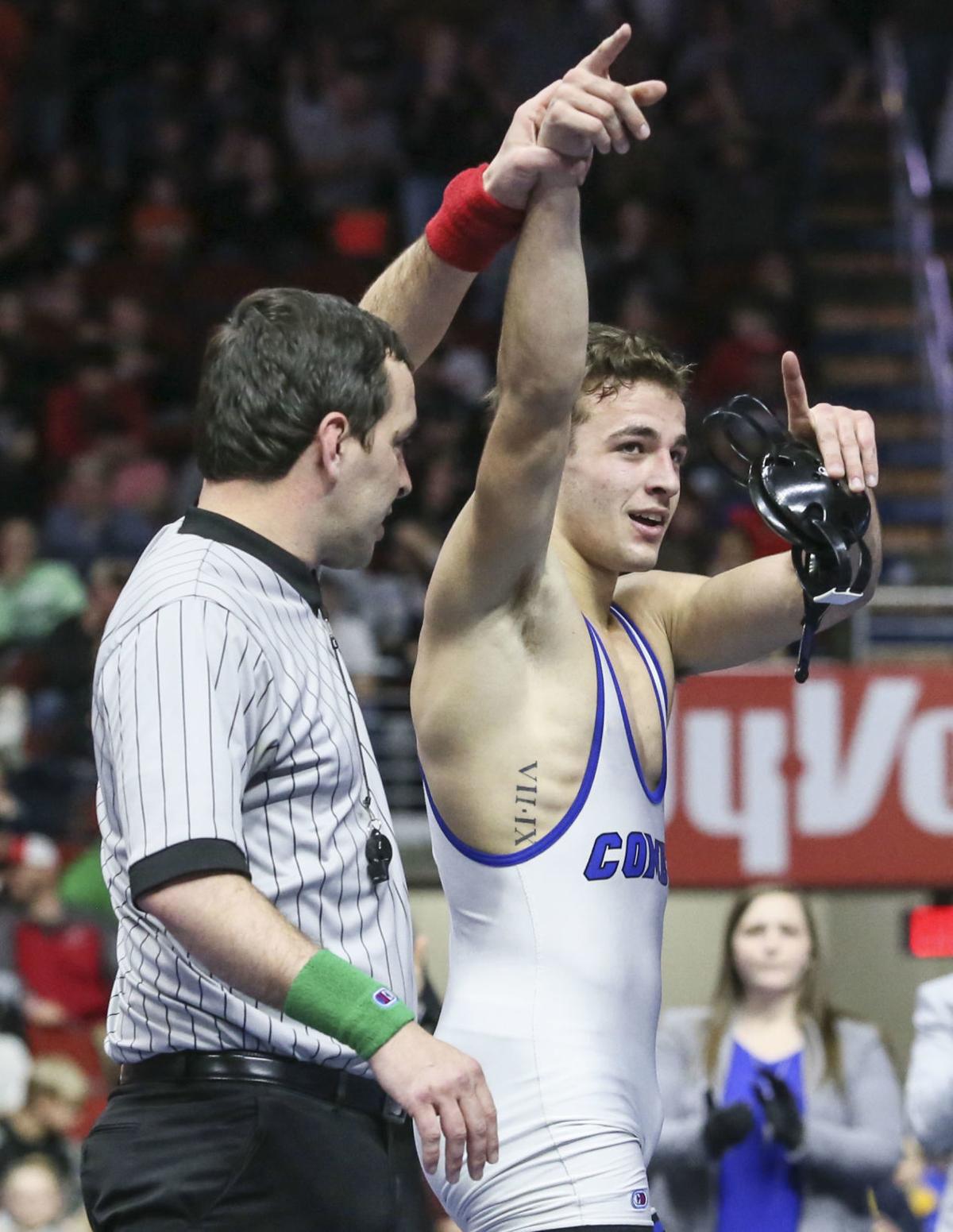 West Libery’s Will Esmoil has his arm raised after winning the Iowa Class 2A 152-pound state championship last month in Des Moines. Esmoil is the Quad-Cities Eastern Iowa Wrestler of the Year. 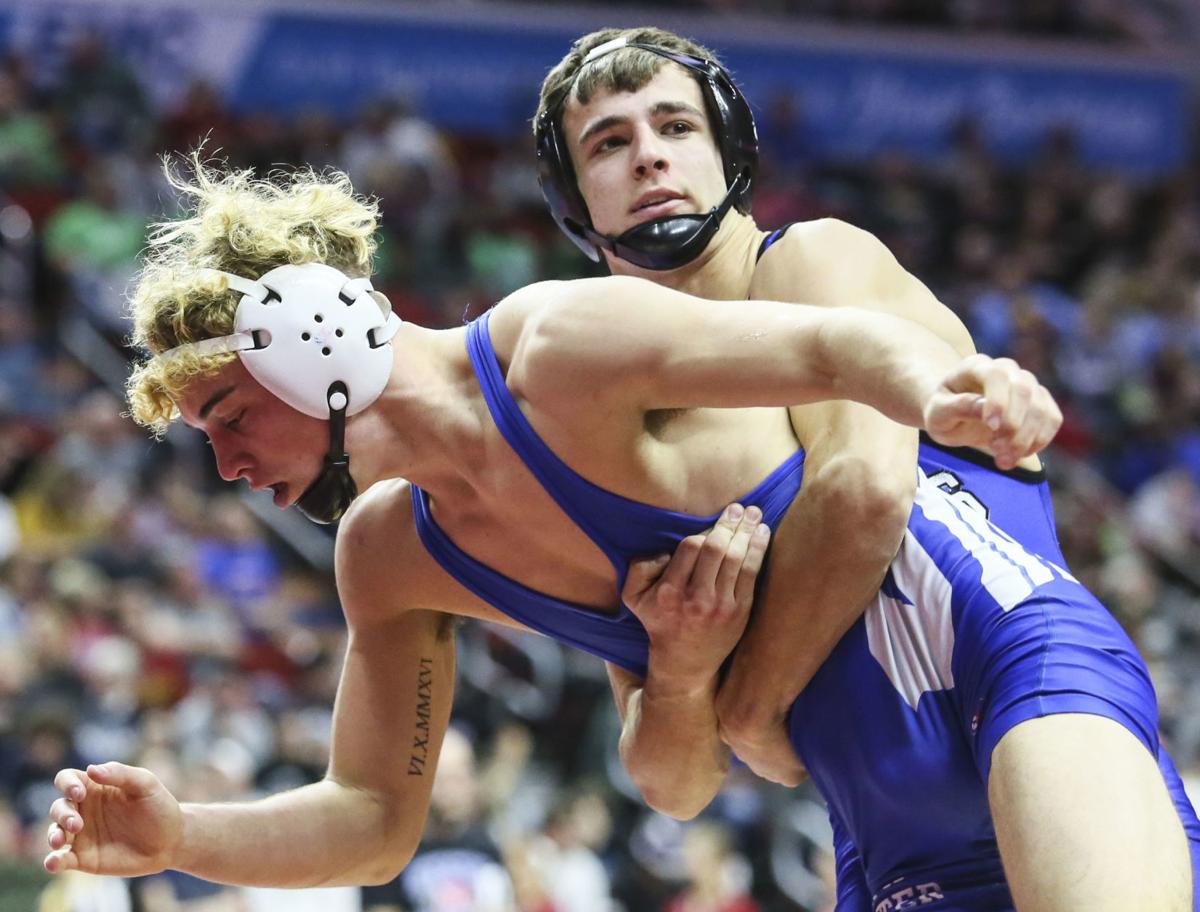 West Liberty's Will Esmoil wrestles against Van Meter-Earlham's Bryce Cole in the 152 weight class during the 2020 Iowa State Wrestling Championships Class 2A at the Wells Fargo Arena in Des Moines, Thursday Feb. 20, 2020.

Those expectations can also be a great source of motivation.

For West Liberty's Will Esmoil, the feelings throughout his high school wrestling career was a mix of both. But capping it all off with a state title illustrates the perseverance Esmoil exemplified to get there.

"His high school career has been a journey with success, failure, adversity and hard work," Comet wrestling head coach Ian Alke said. "At one point in his career he had to look within and determine if he still enjoyed the sport of wrestling.  After taking some personal time, he returned to the sport better than ever.  I will use Will as an example to all ages of wrestlers."

Now that it's over, Esmoil is grateful for all of it.

The Comet senior completed a perfect 42-0 season this year en route to capturing a Class 2A state championship at the 152-pound weight class.

"The atmosphere (at state) is always really cool," said Esmoil, the Muscatine Journal's Wrestler of the Year. "You just have to get the first match over ... the crowd is awesome."

Although he naturally wanted a title, his undefeated record wasn't something he concerned himself with too much.

"It kind of just happened," Esmoil said. "I just took it one match at a time, if it happened, it happened. To do that and then win state senior year feels really good."

Atop the Class 2A 152-pound rankings all season, Esmoil never ceded the ground others in his weight class were eagerly awaiting.

In his last match, Esmoil beat second-ranked Jack Gaukel of Sergeant Bluff-Luton 3-2. That made him the ninth West Liberty wrestler to take a place atop the medal stand at state.

But to Alke, Esmoil's willingness to pay it forward and set an example for the future of the Comet wrestling program was as impressive as anything he did on the mat this season.

"Will is an outstanding ambassador for West Liberty Schools," Alke said. "He's a leader in the wrestling room and in the community.  He understands his role as a role model and makes helping the youth wrestlers a priority."

Thus, not only was this season about finally getting his first championship after getting to the state meet every year of his high school career, but about taking his place among his school's all-time best, a list that includes his brother Bryce, a two-time state champion.

"It's cool, my name will be in the wrestling room with my brothers and there's a poster in there now with my 150 wins," Esmoil said. "Last year, I wanted to try and match my brother and have a chance at winning two, but I took second. But just to even win one is awesome.

"My older brother was good. I wanted to be like him."

Although he doesn't know exactly what he'll be doing after high school, the West Liberty senior still has items on his high school sports bucket list. He anticipates competing in track and field as well as baseball, should those sports happen this year.

"I had a lot of great teammates." Esmoil said. "Talen Dengler has been my practice partner since freshman year."

Even though his high school wrestling career isn't far at all in the rearview mirror, Esmoil already looks back happily on even the most mundane activities he was able to experience with his teammates.

"At state, it's always really fun to bond there and stay in the hotel together, making jokes and stuff like that," Esmoil said.

His wrestling career with the Comets will go down as one of the school's best.

"(Will) cemented himself in the West Liberty wrestling program well before a state championship,"Alke said. "Not as a good wrestler, but as a good person.  He is the reason we coach: to build a relationship and guide a young person to work hard and achieve their goals. I call Will family and I couldn't be more proud of him."

West Libery’s Will Esmoil celebrates with his coaches after pulling out a 3-2 victory in the 152-pound championship Saturday night in Des Moines.

West Libery’s Will Esmoil has his arm raised after winning the Iowa Class 2A 152-pound state championship last month in Des Moines. Esmoil is the Quad-Cities Eastern Iowa Wrestler of the Year.

West Liberty's Will Esmoil wrestles against Van Meter-Earlham's Bryce Cole in the 152 weight class during the 2020 Iowa State Wrestling Championships Class 2A at the Wells Fargo Arena in Des Moines, Thursday Feb. 20, 2020.