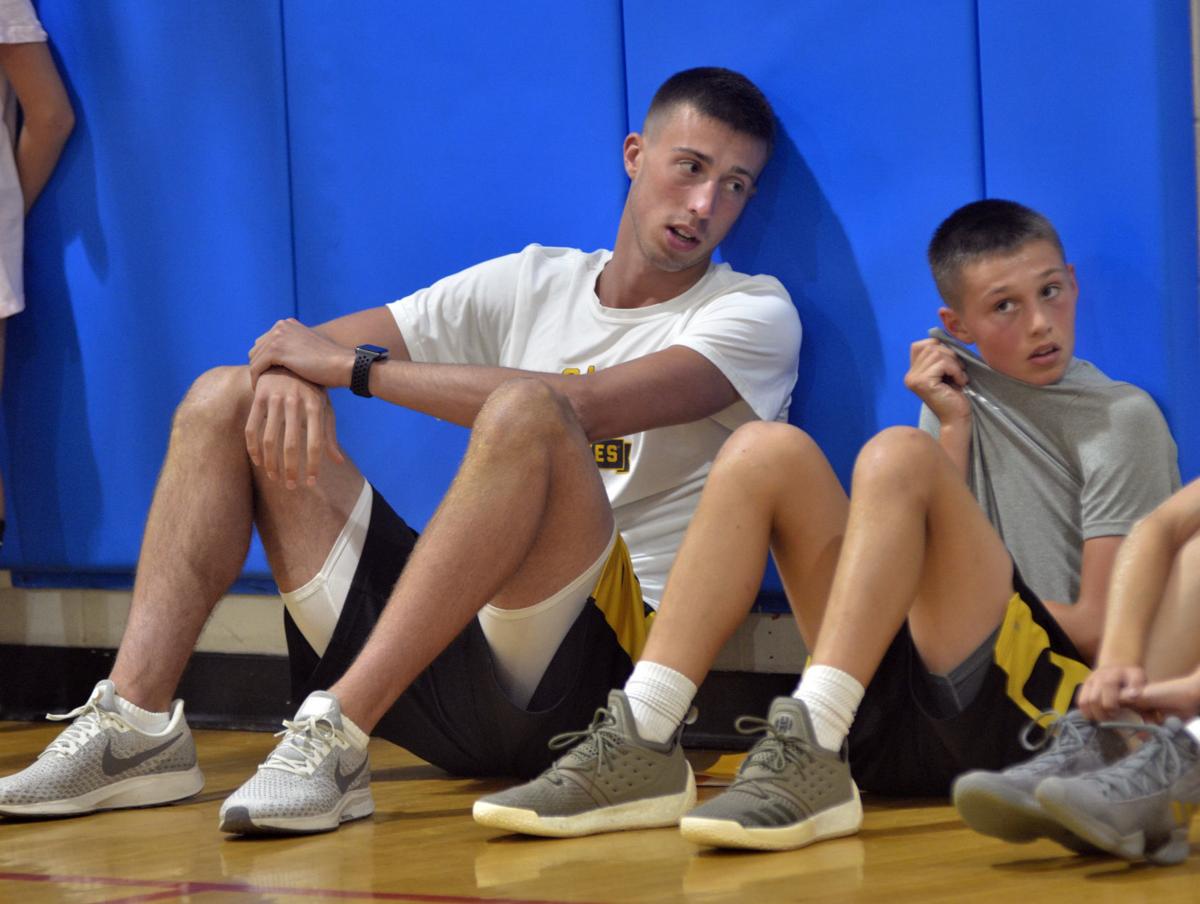 Iowa sophomore Joe Wieskamp talks with his brother, Luke, on Monday at the Iowa basketball camp at Muscatine Community YMCA. 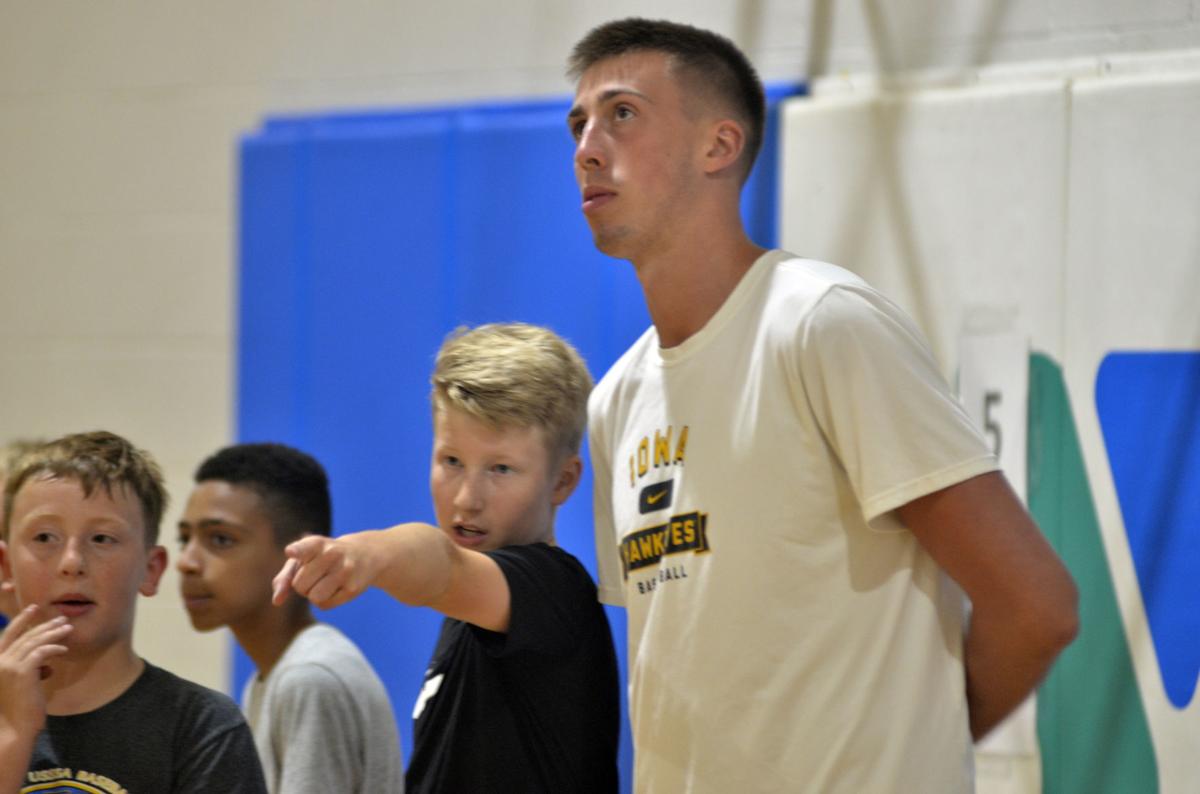 Iowa sophomore Joe Wieskamp listens to a group of campers Monday at the Iowa basketball camp at Muscatine Community YMCA. 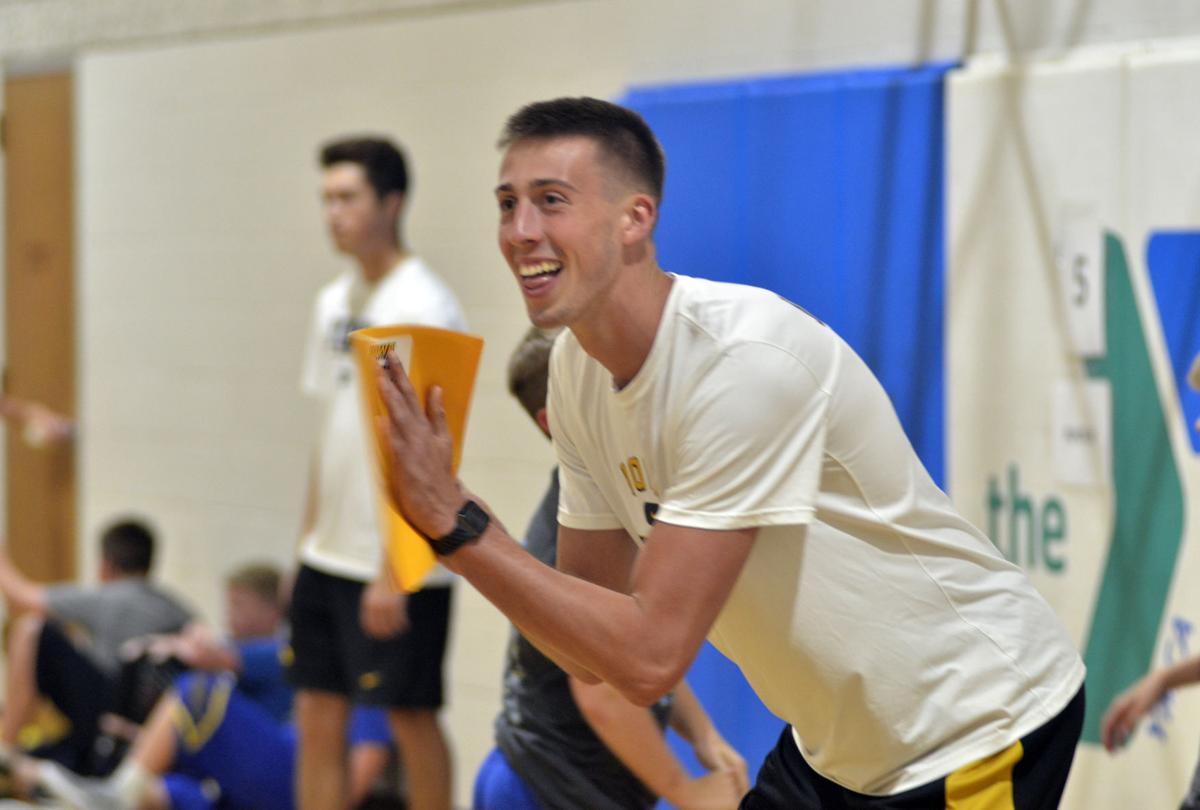 Iowa sophomore Joe Wieskamp cheers after a made basket during a five-on-five scrimmage Monday at the Iowa basketball camp at Muscatine Community YMCA.

Joe Wieskamp stood on the sideline surrounded by kids, watching the conclusion of a five-on-five scrimmage on the court at the Muscatine YMCA. Iowa coach Fran McCaffery joined the crowded sideline to get a closer look at the scrimmage that ended in sudden-death overtime.

This is a unique opportunity for kids in the Muscatine area.

The Iowa basketball program doesn’t generally travel outside of Iowa City to host youth basketball camps. The Hawkeyes made an exception for Wieskamp.

Headlined by Wieskamp, Iowa players, coaches and managers are hosting a four-day camp at the Muscatine Community YMCA this week for kids ages 7 to 12 years old.

The former Muscatine standout relished the opportunity to coach kids from the Muscatine area in the YMCA gym, where he spent much of his childhood working on his game.

“I think it’s super sweet,” Wieskamp said Monday after day one of the camp. “It’s a great opportunity for these kids to get in here. My brother (Luke) is here and his friends are here, so I know a lot of the kids that are here.

“It’s fun to watch them and help them out in any way that I can.”

Wieskamp, a sophomore, was joined by redshirt freshman CJ Frederick as well as walk-ons Austin Ash and Nicolas Hobbs. The entire Iowa team will be in attendance Thursday, and campers will receive a basketball, autographs and a chance to take pictures with the players.

“I think it’s important to have all of us players and coaches down here,” Wieskamp said. “Just to see them around, it gives the kids a little bit of motivation.”

Prior to the summer, Al Seibert, Iowa’s Director of Basketball Operations, approached Wieskamp and asked if it’d be a good idea to have a camp in Muscatine. Without hesitation, Wieskamp directed Seibert to Bret Olson, the executive director of the YMCA.

Olson estimated that nearly 90 kids showed up for day one of the camp.

“(Seibert) thought we’d get a good turnout with me being from here,” Wieskamp said. “I thought it would be a great idea. I remember shooting in here, coming in here a lot so I thought it’d be the perfect place to have this camp.”

Olson remembers those days, too, saying that Wieskamp would often do shooting drills that were normal for a college kid as opposed to a teenager. That’s just one of many reasons why welcoming the Iowa program to the YMCA to put on the camp was a “no-brainer.”

“It’s great because our goal is to make sure the Y is a safe, fun place for kids to be,” Olson said. “It’s pretty exciting for us and we love it. We were excited to put it together. We just had to provide the space.

“It’s a pretty unique opportunity for a kid. All of these kids look up to (Joe) and he’s their role model.”

Long before he ever donned an Iowa uniform or led Muscatine to the Class 5A state tournament, Wieskamp remembers attending camps like this one, run by college players and coaches and the impact they had on him. Now that he’s the teacher, Wieskamp hopes to give young kids a similar experience to what he remembers.

It’s unclear if the camp will be more than a one-time occasion in Muscatine. Olson hopes the Hawkeyes and Wieskamp will continue to return.

“I hope they come back next year,” Olson said. “As long as Joe is still playing I’m sure they’ll keep coming back, which would be really cool.”

Mississippi Athletic Conference officials announced Wednesday it will play varsity level only competition this summer for baseball and softball.

Time remains on Gary Barta’s side.

The John Deere Classic is another regional event to be lost due to COVID-19 restrictions.

Although Rylee Blake won't get a senior season to compete for the Muscatine girls track and field team, she can say her career ended on a high note.

Amid much uncertainty, high school sports finally have a definitive return date.

NEW YORK (AP) — Major League Baseball players ignored claims by clubs that they need to take additional pay cuts, instead proposing they receive a far higher percentage of salaries and commit to a longer schedule as part of a counteroffer to start the coronavirus-delayed season.

Iowa sophomore Joe Wieskamp talks with his brother, Luke, on Monday at the Iowa basketball camp at Muscatine Community YMCA.

Iowa sophomore Joe Wieskamp listens to a group of campers Monday at the Iowa basketball camp at Muscatine Community YMCA.

Iowa sophomore Joe Wieskamp cheers after a made basket during a five-on-five scrimmage Monday at the Iowa basketball camp at Muscatine Community YMCA.