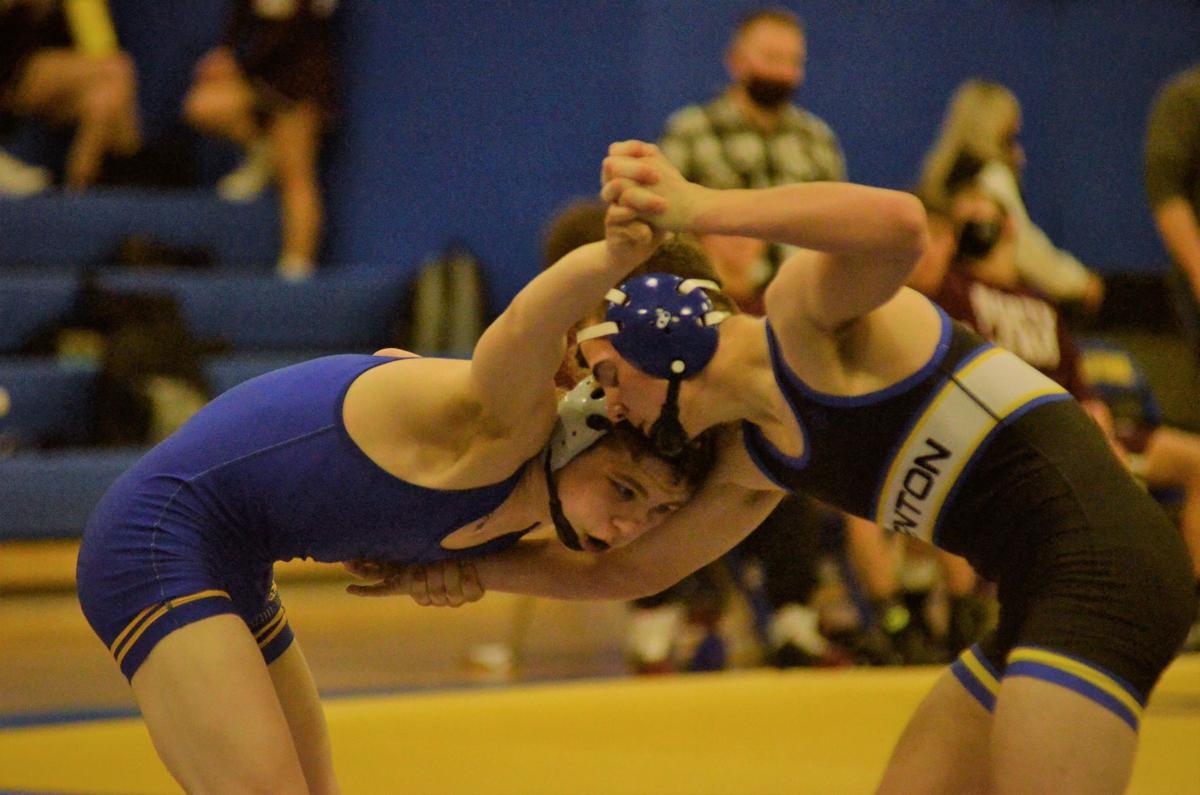 Wilton's Colton Cruse engages with Benton Community's Koley Kelly during the 152-pound match during the Beavers' dual against the Bobcats, Jan. 12, 2021. Cruse won the match by pin fall in under two minutes. 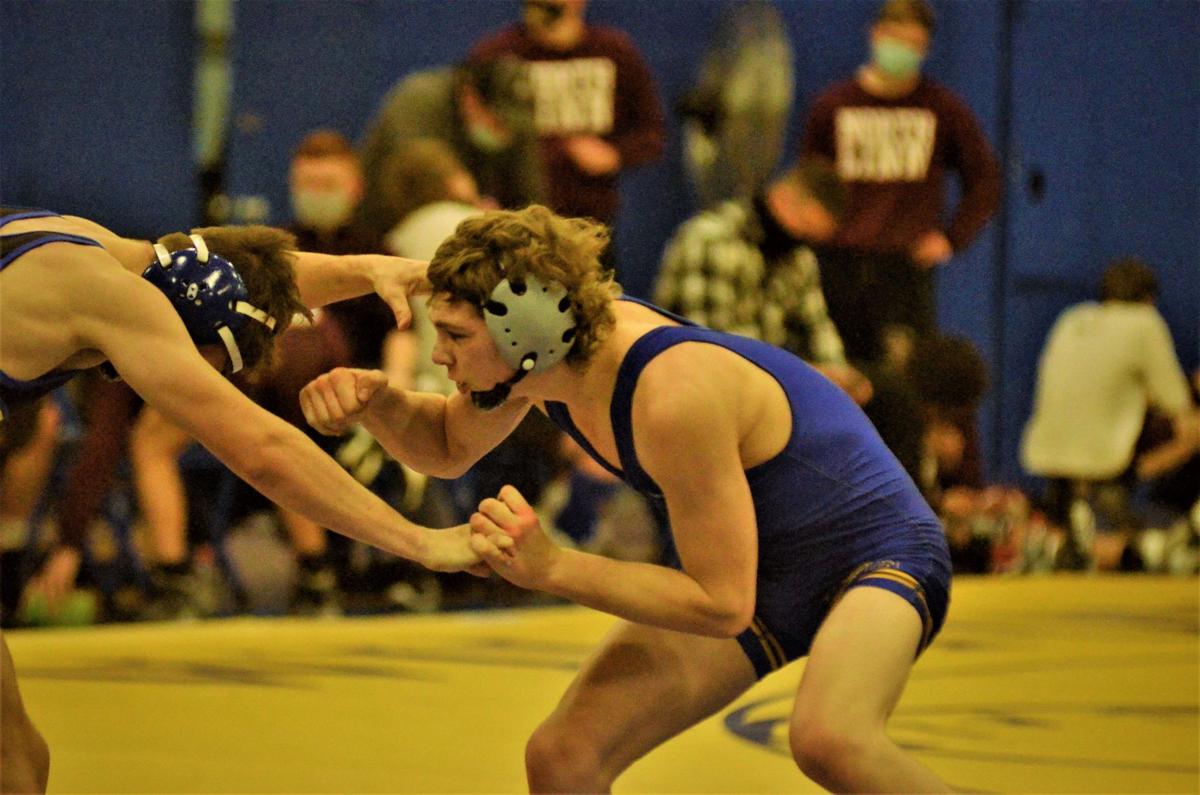 Wilton's Colton Cruse looks for an opening during his match against Benton Community's Koley Kelly during the 152-pound match during the Beavers' dual against the Bobcats, Jan. 12, 2021. Cruse won the match by pin fall in under two minutes.

A senior seeking to cap off his final high school season with his first trip to the Class 1A state tournament, Cruse is off to a 23-7 start.

After he's done at Northwest Iowa Community College in Sheldon, where he plans to attend post-graduation, Cruse may end up being responsible for sending an electrical charge into your living room.

"I want to go into the power line program and become a lineman," he said.

And that solid year has one big goal ahead of it this season.

Wilton celebrated its seniors at Tuesday's meet, and Cruse relished the opportunity to be recognized with his classmates and teammates.

"I've been waiting to go out there and be able to share my favorite memories and future plans," Cruse said. "I love enjoying my time around the team and having fun.

"It has all been a great experience."

His pins came against Koley Kelly of Benton Community and Owen Trimpe of Mid-Prairie. Neither of those matches saw the second period.

Cruse's most recent loss came in the 152-pound championship match at the Gary Curtis Invitational at Highland, when New London's Josh Glendening got the best of Cruse with a 5-2 decision.

Even in the loss, however, Cruse cemented his place among the state meet hopefuls. The Predicament has Glendening ranked ninth in Class 1A at 152.

And the Wilton grappler feels well-positioned, despite a few losses thus far.

It certainly has taken a quality opponent to get the best of Cruse this season. Opponents who have beaten Cruse have a combined record of 119-27 this season.

And only three of the wrestlers who have beaten Cruse are in 1A, so the Beaver 152-pounder's path to state gains a little more clarity every day.

Though he's been impressive throughout his entire prep career, Cruse's work on his feet has put him in position to think big in his final season with the Beavers.

"When I first started out, I wasn't very good (on my feet)," Cruse said. "But I've been picking up on getting better footwork, so it's just making me better overall."

Last season, Cruse fell just short of state after getting pinned in the third-place match at 145 at the 1A District 8 meet. Lisbon's Gage McCoy was the winner in that one to culminate a junior season that saw Cruse finish 24-11.

"I'm really hoping to (get to state)," Cruse said. "I haven't done that yet, and I think it would be a great experience to get there."

Wrestling at 113 pounds as a freshman, he made it as far, but suffered the same fate, getting pinned in the third-place match at the district meet. That time, however, it was at the hands of Wapello's Christopher Ewart.

His sophomore season got off to a promising 13-2 start wrestling at both 126 and 132. It was cut short with his last healthy match happening in mid-December of 2018, sabotaging his chances at a late-season run at the elusive state berth.

While it's been stiff competition for Cruse in competition, he admits he wouldn't be in a position to finally get to state without the competition that has come from within the Wilton wrestling room over the years.

Cruse specifically credits teammate Kael Brisker. The 132-pounder is a two-time state place winner at Wilton and is looking for his first state title.

The two classmates are enjoying their last season with the Beavers together, but both remain steadfast in ending the season on the mat inside Des Moines' Wells Fargo Arena.

"Practice partners, and having the team that I do around, has been really important to me and helped me grow as a wrestler," Cruse said, "having a guy like Brisker to work out with has been great, he provides really great competition and makes everyone on the team better because he pushes them to their limits."

Regardless of how the season plays out, Cruse is thankful to have the season to compete.

"Over the summer, I didn't know what was going to happen, I was pretty skeptical," Cruse said. "I'm just really glad to have this chance."

As the Muscatine girls basketball team knows all too well, it is an unpredictable world. The Muskies, however, know exactly what to expect fro…

Dieckman comes up big down the stretch in win

CLINTON — With an eight-point lead in hand with two and a half minutes left in the third quarter, the Muscatine Muskies closed out their Missi…

Wilton's Colton Cruse engages with Benton Community's Koley Kelly during the 152-pound match during the Beavers' dual against the Bobcats, Jan. 12, 2021. Cruse won the match by pin fall in under two minutes.

Wilton's Colton Cruse looks for an opening during his match against Benton Community's Koley Kelly during the 152-pound match during the Beavers' dual against the Bobcats, Jan. 12, 2021. Cruse won the match by pin fall in under two minutes.